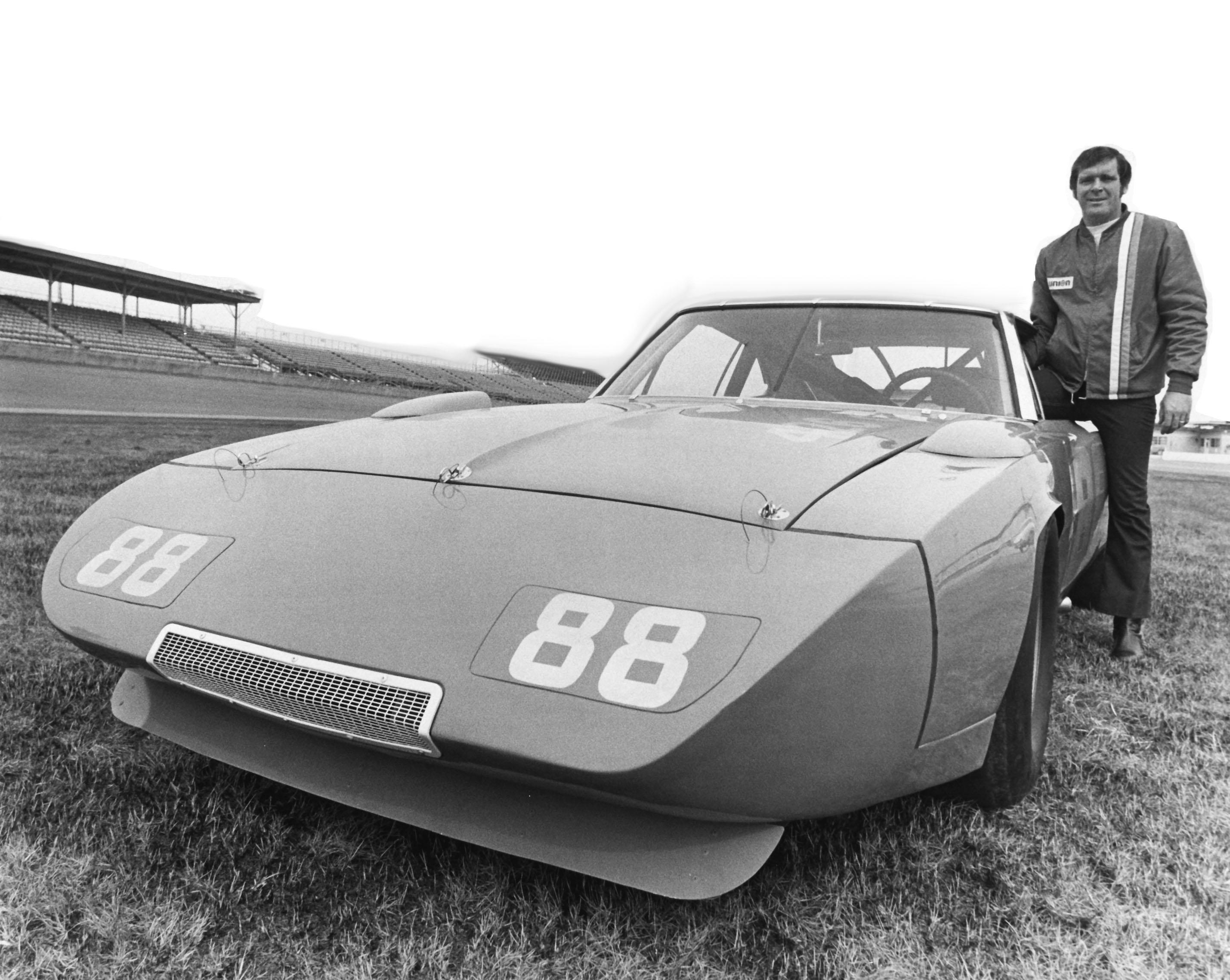 This is the Dodge Daytona that Buddy Baker drove when he broke the 200 mph barrier at Talladega Superspeedway. Photo courtesy of NASCAR Archives & Research Center via Getty Images.

When the field lines up Sunday to take the green flag to start the GEICO 500 at Talladega Superspeedway, about the only thing you can expect for sure is to expect the unexpected.

The longest oval in NASCAR at 2.66 miles, Talladega is also one of the most unpredictable tracks on the circuit, a place that is equally likely to produce a surprise first-time winner or a 20-car pileup, or maybe both in the same race. Running nose-to-tail and three-wide at speeds reaching 200 mph or so will do that – you just never know what’s going happen next. And when something does happen, it happens fast. Real, real fast.

And it’s been that way since the beginning.

Opened in 1969 as Alabama International Motor Speedway, the first premier series race at the track was won by substitute driver Richard Brickhouse after most of the series regulars refused to race over safety concerns. Inadvertently setting a precedent that would be repeated over the years, Brickhouse never won another NASCAR race after his Talladega triumph. He remains one of six drivers who won their only career premier series race at Talladega, including Dick Brooks, Lennie Pond, Ron Bouchard, Bobby Hillin Jr. and Phil Parsons

Here are five Hall of Fame moments that occurred at Talladega over the years. 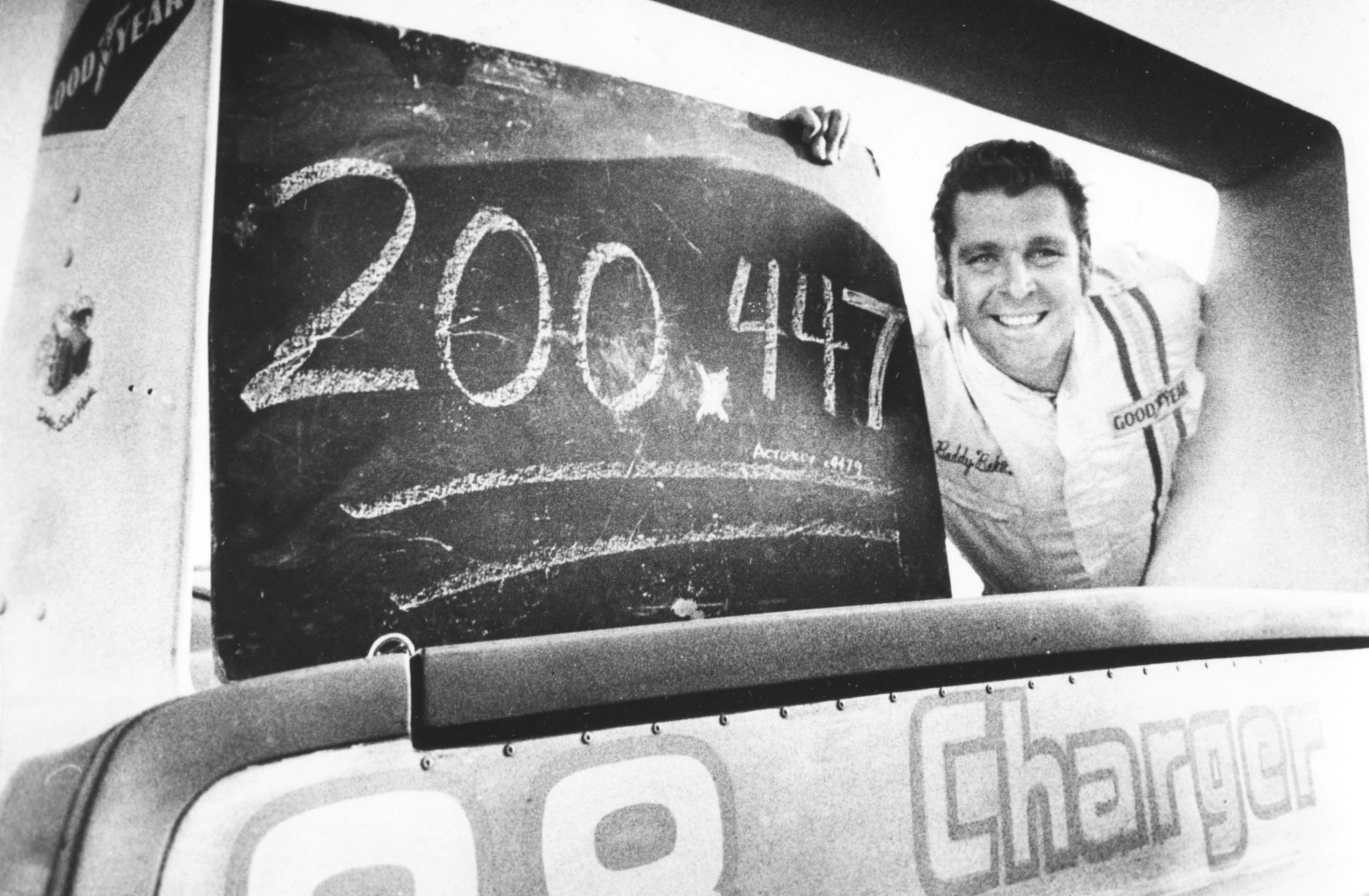 Buddy Baker was the first driver to shatter the 200 mph barrier on a closed course. Photo courtesy of NASCAR Archives & Research Center via Getty Images.

Baker set the record in what was known as a “test mule,” a No. 88 Dodge Daytona that Chrysler had assembled. As legend has it, the car began life as a Dodge Charger Hemi that was sent to Los Angeles for testing by a magazine. Unfortunately, it was stolen, stripped and later found perched on cement blocks in Watts.

Nichels Engineering in Indiana rebuilt the hulk and made it into a proper NASCAR stock car for engineering research and development. The No. 88 was run on the 4.75-mile oval at Chrysler’s Chelsea Proving Grounds, where it purportedly hit a top speed of between 230 and 243 mph, according to several estimates.

But the official 200+ mph run came at Talladega, and it delighted Baker. “Gosh, it’s the best feeling I’ve had in a long, long time,” said Baker. “This is something that no one can ever take away from you, being the first guy to run 200 mph on a closed-course circuit.”

That day in Talladega turned out to be one that would stick with Baker for the rest of his racing career, an important accomplishment in the sport’s history and one that no one else could claim. “We got a lot of press,” Baker later said. “It wasn't a big deal for me back then, but it became a big part of my life.” 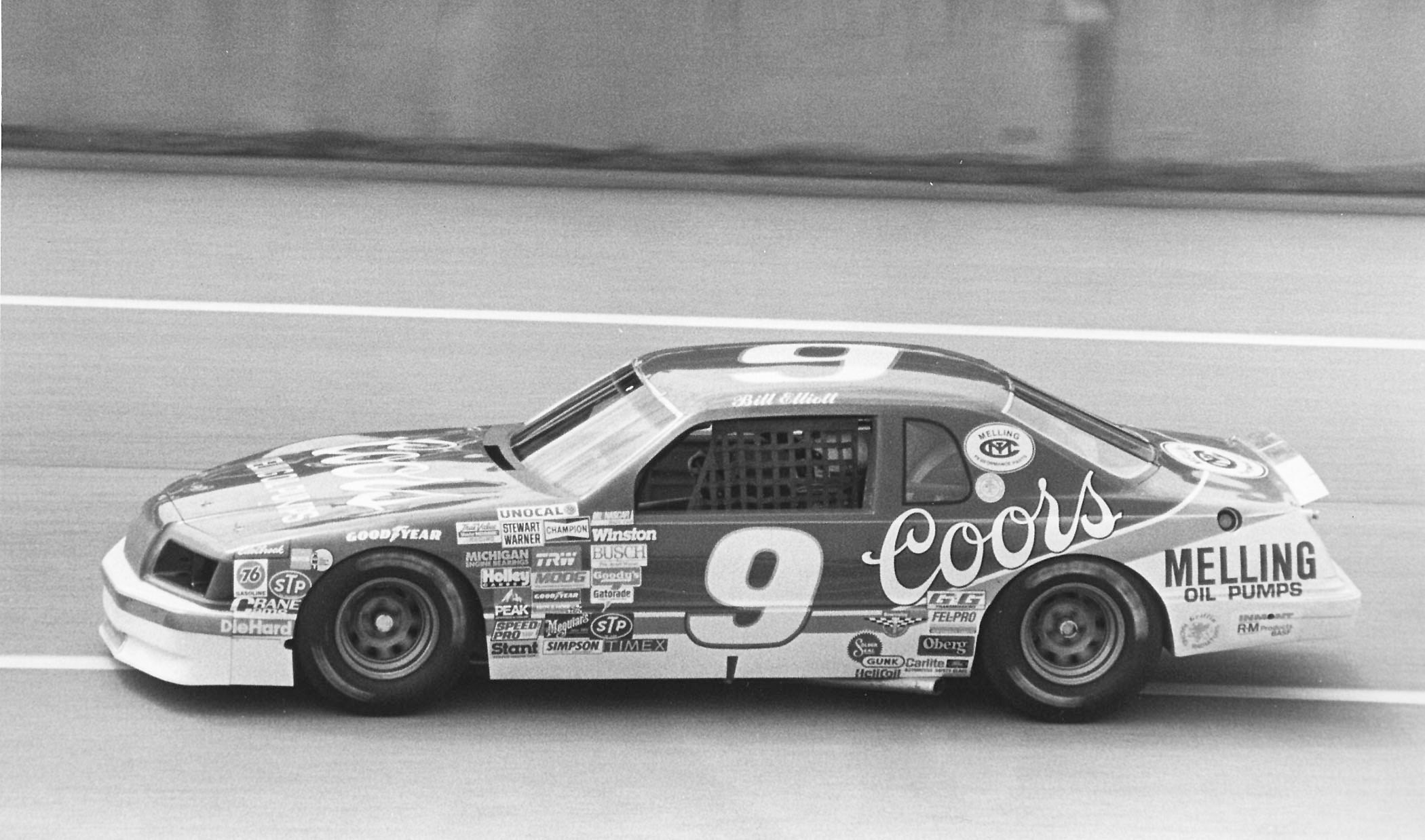 Caption: Bill Elliott made up two laps under green to win at Talladega in 1985. Photo courtesy of NASCAR Archives & Research Center via Getty Images.

At a big, fast track like Talladega Superspeedway, cars run much faster in groups than they do alone. Drafting, as it’s called, is much more aerodynamically efficient than a single car riding around by itself. And that makes what Hall of Famer Bill Elliott (2015) did in 1985 even more remarkable. Running largely by himself, Elliott came from two laps down under green to win the 1985 Winston 500.

Elliott lost the two laps when he had to pit on Lap 48 for an oil leak. In theory, the cars drafting nose-to-tail should have been several miles per hour faster than Elliott running by himself. If everything was equal – aerodynamic drag and downforce and horsepower – there was simply no way Elliott would have been able to even catch the lead pack, let alone make up the more than 5 mile distance he trailed the field by. And yet, by Lap 145 – less than 100 laps after he pitted – Elliott was in the lead, having gotten all the back to the front under green-flag conditions.

How was Elliott able to make up all that ground? Elliott’s family built Ford passed inspection, but back then there was only a long template that ran nose-to-tail and no cross templates measuring width. The most logical explanation for the speed of the car was that it pushed less air than the other Fords in the field, either because it was narrower or lower – or narrower and lower – than the competition.

“All I know is I had the same opportunity to put my car through the same inspection process that Elliott’s car went through,” said Gary Nelson, who at the time was crew chief for Hall of Famer Bobby Allison (2011) at DiGard Racing. “They were just smarter than me that day.”

As for Elliott himself, he was vague about the particulars of his race car. “We were able to bring the sport to the next level and focus on certain things that other people didn’t think or weren’t willing to work for.” said Elliott.

“We were able to bring the sport to the next level and focus on certain things that other people didn’t think or weren’t willing to work for." 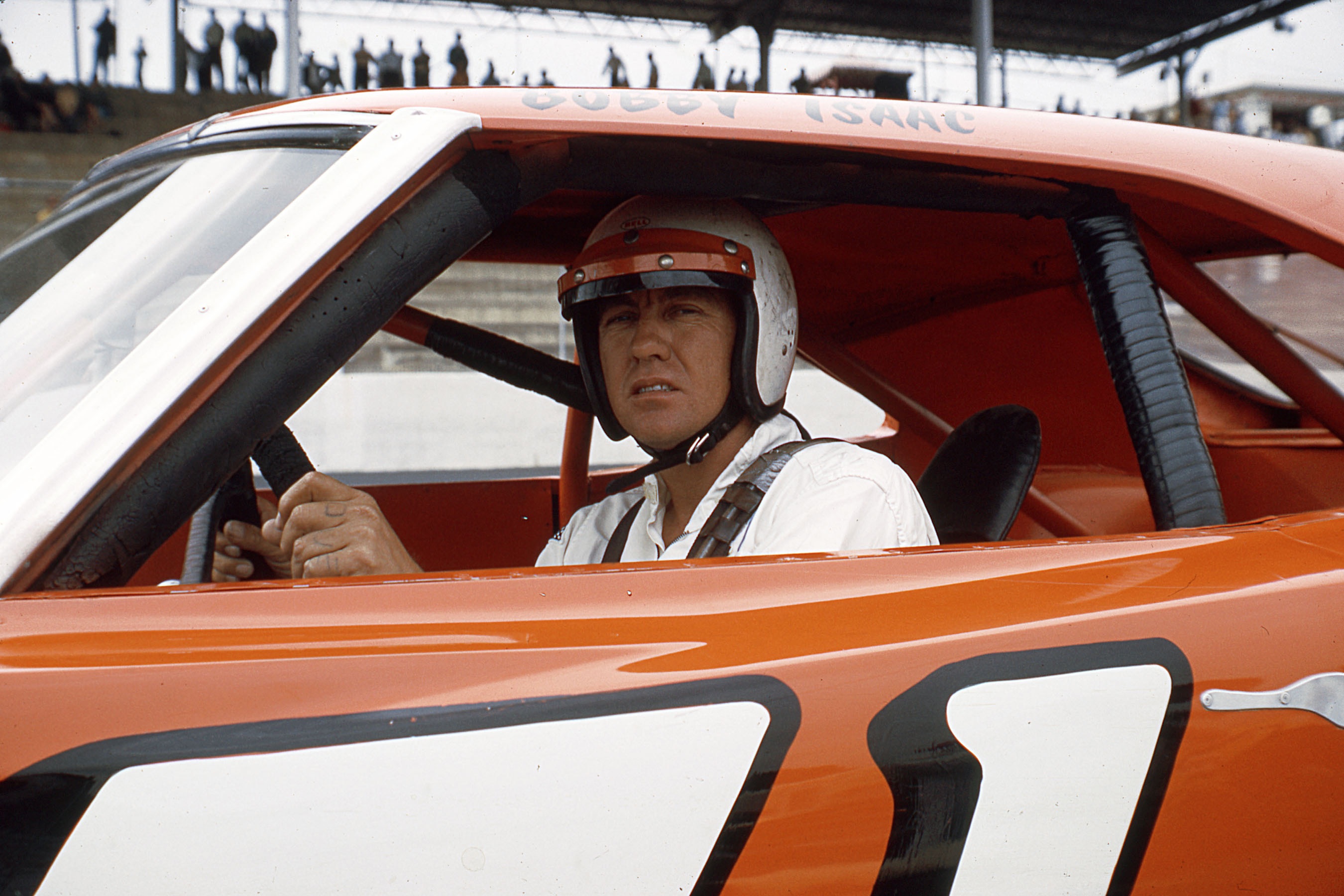 Bobby Isaac was always fast at Talladega, at least until he walked away. Photo courtesy of NASCAR Archives & Research Center via Getty Images.

Bobby Isaac, the 1970 premier series champion and a member of the NASCAR Hall of Fame Class of 2016, always had fast cars at Talladega. Driving team owner Nord Krauskopf’s K&K Insurance No. 71 Dodges, Isaac won the pole for each of the first five races at Talladega, finishing second three times and posting four top-five finishes.

But after leaving Krauskopf’s team, things changed dramatically for Isaac. Midway through a race at Talladega in May 1973, Isaac pulled into the pits and climbed out of his car, telling team owner and Hall of Famer Bud Moore (2011) that he heard a voice in his head telling him to get out of his car. In that race, driver Larry Smith was killed in an accident, and Isaac did not race again for the remainder of the season.

In fact, Isaac’s career effectively came to a halt after the Talladega incident. He never again won a race or qualified on the pole, competing in just 19 of 90 premier series races from 1974-76. Considering Isaac won 28 races and 32 poles in just 1969 and ’70, his Talladega decision surprised many. 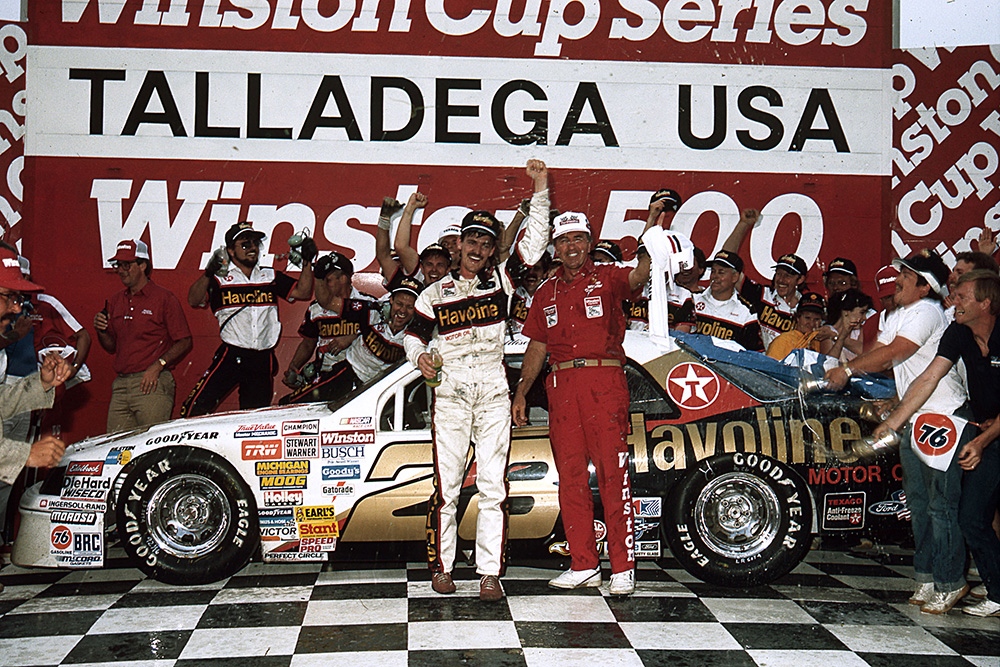 Since Talladega opened in 1969, the track has produced 10 first-time premier series race winners. One of those first-time Talladega winners who went on to enjoy great success was Hall of Famer and Alabama native Davey Allison (2019), who as a rookie in 1987 won the Winston 500 at Talladega. Later that season, Allison would become the first rookie in NASCAR history to win more than one premier series race in his rookie season.

Allison’s performance at Talladega was one of domination. With 10 laps to go, he made what would prove to be the race-winning pass, going past fellow Hall of Famer Dale Earnhardt (2010) to score his first of 19 premier series race victories. All told, Allison led 101 of 178 laps, with the race shortened 10 laps because of impending darkness brought on by the long red-flag period.

“This thing’s just been awesome all day,” said Allison as he sat in his car after the race. “These guys did a super job on this car and I could do anything I wanted with it. I’m going to tell you what, I’m just tickled to death.”

Winning at Talladega was especially sweet for Allison, a native of Hueytown, Alabama, about 60 miles from the track. Allison would win again at Dover International Speedway, making him the first driver in NASCAR history to win two premier series races in his rookie season.

More than Allison’s impressive victory, though, the 1987 Winston 500 will be remembered for two other moments that weekend. First, Hall of Famer Bill Elliott (2015) set the all-time fastest pole lap in NASCAR history, qualifying his No. 9 Ford at 212.809 miles per hour. And early on in the Winston 500, Hall of Famer Bobby Allison (2011), Davey’s father, cut a tire, sending his car into the frontstretch catchfence in a horrifying crash. Fortunately, the elder Allison was not seriously injured, though after that race, NASCAR instituted steps to cut speeds at the track. 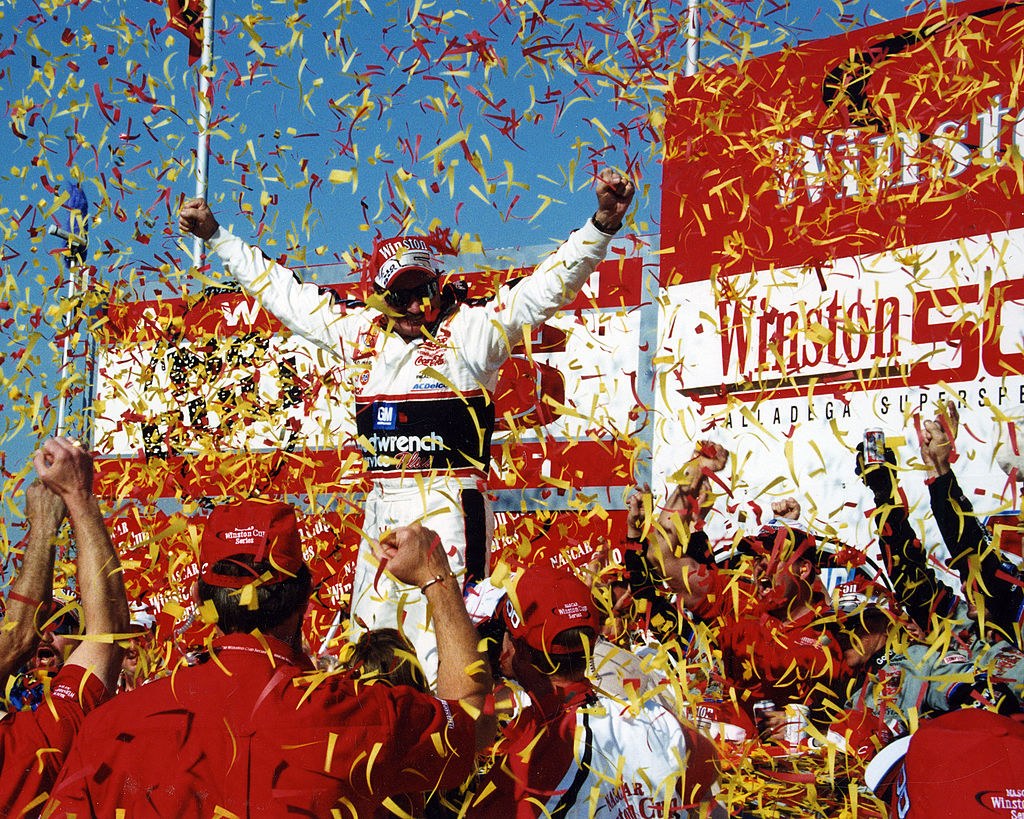 Dale Earnhardt’s final victory in 2000 was one of his most memorable. Photo courtesy of NASCAR Archives & Research Center via Getty Images.

Maybe Hall of Famer Dale Earnhardt (2010) really could see the air. That was a reasonable assumption after Earnhardt won his 76th and final NASCAR premier series race in remarkable fashion. The scene was Talladega Superspeedway and the date was Oct. 15, 2000. As always, the Talladega grandstands were jammed full of members of Earnhardt Nation, untold thousands who had come to see just one thing: Their hero win his 10th Talladega race. But with four laps to go, they appeared headed for bitter disappointment, as Earnhardt was buried way back in 18th place, having just bounced off of Rich Bickle’s car and apparently trapped in a sea of race cars on all four sides of him, surrounding the black No. 3.

But suddenly, seemingly out of nowhere, Earnhardt charged forward, parting the field like Moses parting the Red Sea, and with Kenny Wallace and Joe Nemechek behind him, Earnhardt continued flying forward in the closing laps. The Talladega grandstands exploded in a thunder of applause as Earnhardt methodically worked his way through the traffic. “I don’t understand how he did that!” shouted Hall of Famer Benny Parsons (2016), who was doing the live television commentary.

As the cars came to the white flag, Earnhardt’s teammate Mike Skinner had the lead on the bottom lane, with Dale Earnhardt Jr. behind him. But up top, it was the elder Earnhardt, with Wallace pushing him for everything he was worth and Nemechek holding sway behind them.

On the last lap, Skinner’s challenge faded and the top three pulled away. Earnhardt crossed the line the winner, claiming the $1 million Winston No Bull 5 bonus money in addition to his race earnings. It was a display of shock and awe that left the fans dazed and delighted in their disbelief. The noise from the grandstands was deafening as Earnhardt crossed the start-finish line. On pit road, team owner and Hall of Famer Richard Childress (2017) was so happy that he grabbed crewman Danny Lawrence and kissed him on the cheek. “The race fans got the race they deserved today,” said Childress. “This is for the race fans.”

"It was a chess game of getting there and staying there."

“It was wild,” Earnhardt said in Victory Lane. “I didn’t have any thought that I have a chance of winning this race, starting where I did on that restart. … It was a chess game of getting there and staying there and it just worked out for us to be there at the right time.”