One of NASCAR’s earliest female pioneers set speed records on her own terms. 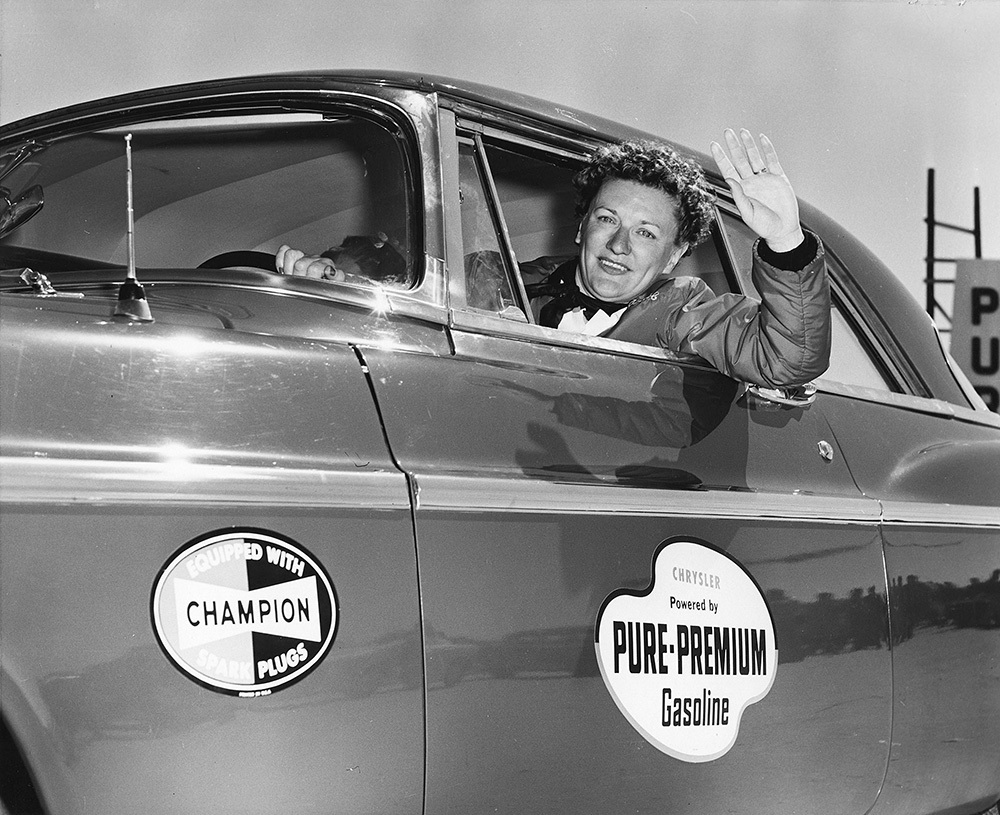 Vicki Wood became a legend on the sands of Daytona Beach from the mid-1950s to the early 1960s. Photo courtesy of NASCAR Archives & Research Center via Getty Images.

If you look up the name of Vicki Wood, you’ll find she has no official record in the NASCAR premier series: No wins, no top 10s, no poles, not even any starts. But when it came to speed, everyone in NASCAR knew who Wood was in the late 1950s and early 1960s.

Wood, who passed away June 5 at the age of 101, was a pioneering female competitor albeit with a different specialty than most racers: Her thing was setting speed records on closed courses. She never toured the traveling NASCAR circuit, competing mostly in jalopy races near her native Detroit, where she amassed 48 trophies and did battle with male drivers at a time when most women only ran powder puff races against each other.

While Wood enjoyed a modicum of success and notoriety beating and banging on local short tracks, where she really made a name for herself was at Daytona Beach. Back before Daytona International Speedway opened in 1959, NASCAR raced on the old Daytona Beach & Road Course, which basically involved driving south for about 2 miles down Atlantic Avenue, taking a hard left onto the beach, racing back about 2 miles north on the sand and then taking another hard left to get back on Atlantic Avenue and head south to do it all over again. 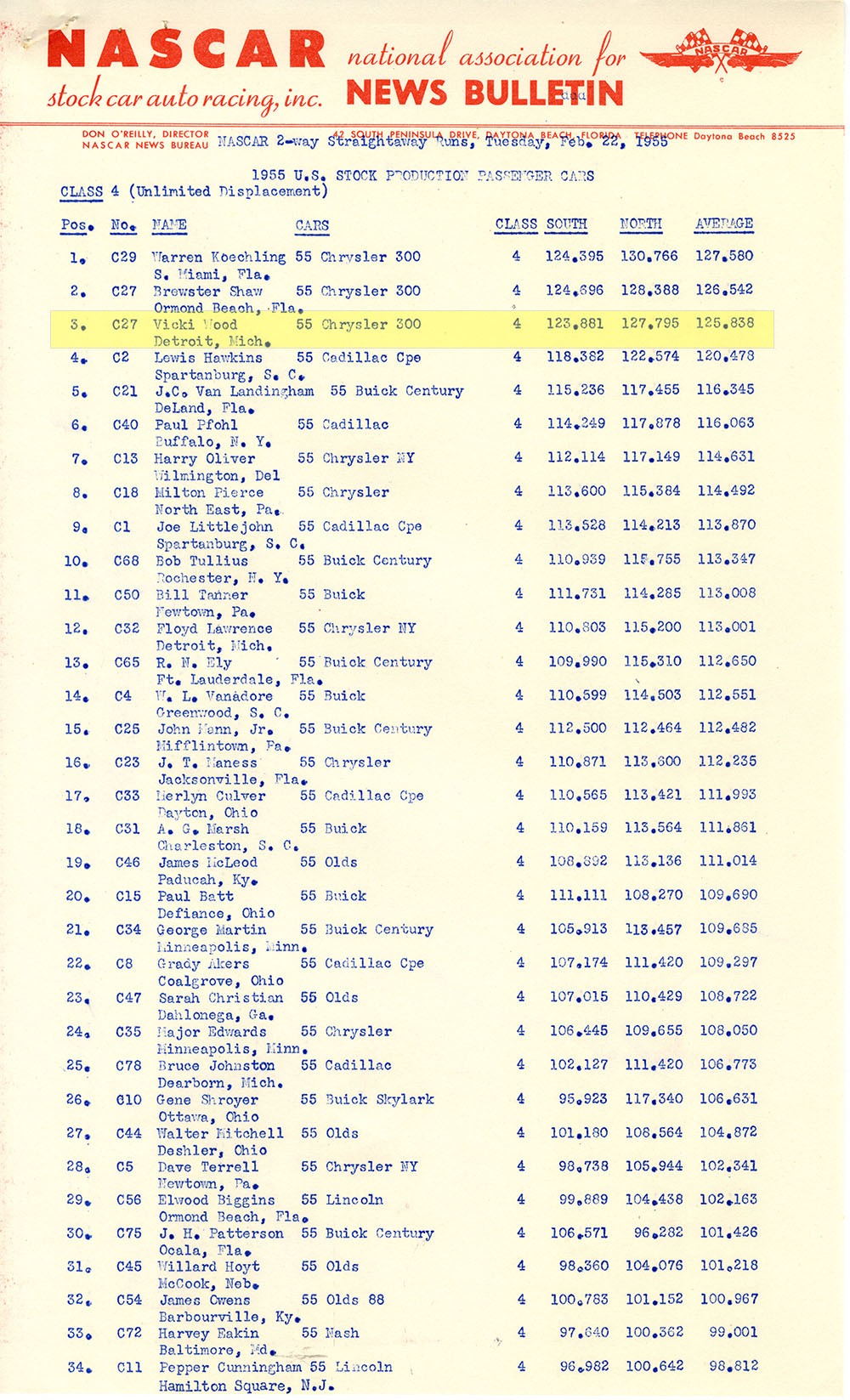 In addition to staging races on the beach, NASCAR also conducted time trials on a measured-mile course, with two-way runs up and down the beach. Averaging speeds were calculated by combining the speeds of the northbound run and the southbound run and then dividing by two.

In those heady days of the 1950s, Detroit’s Big Three automakers, along with some of the smaller brands, were engaged in furious competition to see who built the fastest cars. NASCAR founder and Hall of Famer William H.G. France (2010) capitalized on this need for speed by staging time trials for a whole variety of classes in the 1950s and 60s.

And it was on the sands of Daytona where Wood made her mark. In 1955, Wood’s husband, Clarence “Skeeter” Wood, brokered a deal with Chrysler to put her behind the wheel of a new Chrysler 300, a fast and powerful model that would win premier series championships in 1955 and ’56.

Of the 34 drivers who competed in the U.S. Stock Production Class Passenger Cars Class 4 on February 22, 1955, Wood was third fastest, averaging 125.838 miles per hour. Not only was that speed near the top of the charts, it was a woman’s record. NASCAR even sent out a special news bulletin hailing Wood as a “Lady Speedster.” 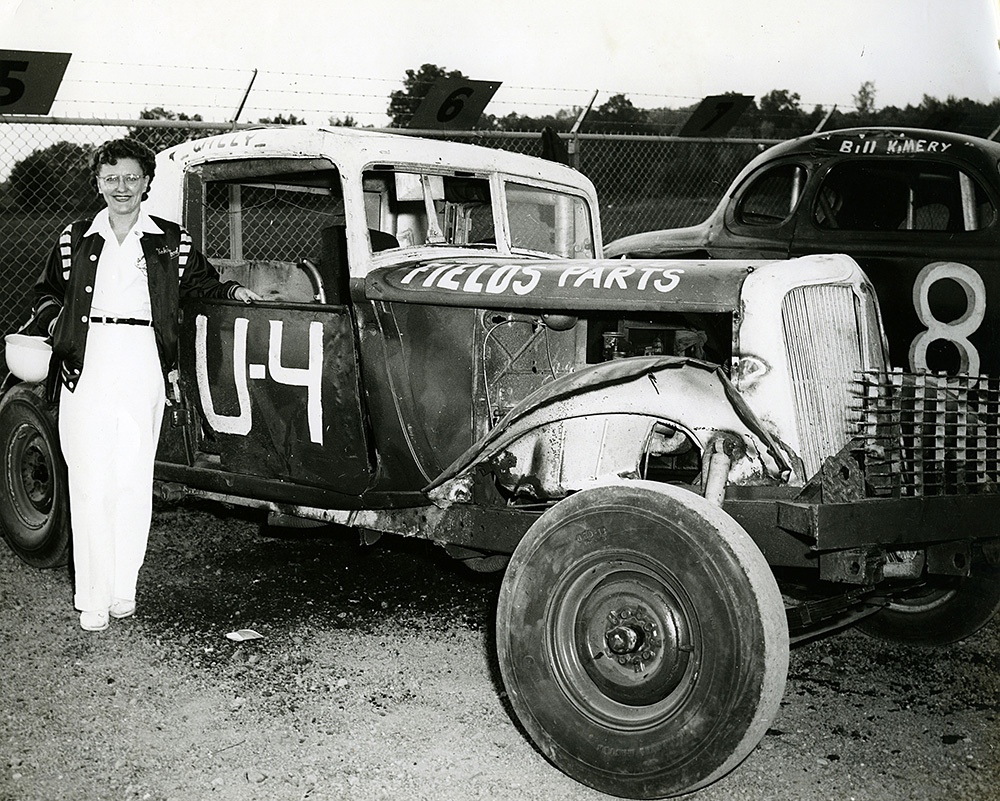 Vicki Wood got her start in auto racing competing in this jalopy in the Detroit area in 1953. Photo courtesy of NASCAR Archives & Research Center via Getty Images.

Wood was a favorite of France, who not only allowed her to compete in the time trials on the beach, but once Daytona International Speedway opened in 1959, Wood set a woman’s record, running a lap of more than 130 mph, this time in a 1959 Pontiac. When she first went to the track, Wood was stopped and told women weren’t allowed in the pits. France intervened, telling the track officials, “Vicki Wood is not a woman. She’s a driver, and she’s allowed in the pits.”

After her record-setting run at Daytona, “Family Weekly” magazine did a profile of Wood, dubbing her the “Fastest Woman in the World.” The article went on to say “Racing drivers of both sexes eat dust when this Michigan grandmother gets behind the wheel.”

The following year, Wood would set the all-time speed record for a stock-bodied automobile on the sands of Daytona Beach, running 150.375 mph. 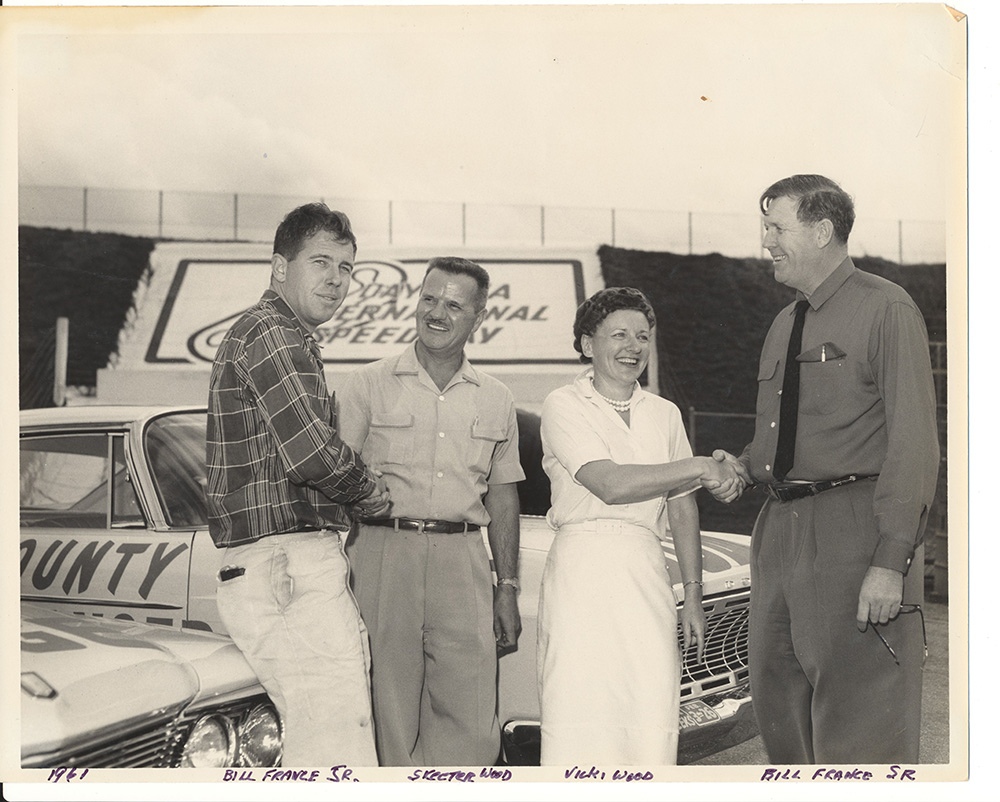 Wood always raced with a scarf and sometimes in a skirt and heels. She quit competing in 1963, eventually moving to South Florida, where she worked in a department store. Wood was known as a good storyteller and was a popular fixture in the Daytona Beach racing community, where many retired racers live. She was feted last year for her 100thbirthday and by accounts still had her characteristic charm, good humor and sharp wit.

And while Wood is no longer with us, her proud legacy remains – and so do the speed records she set.