The inside story behind Dale Jr.: Glory Road Champions from the NASCAR Hall of Fame’s guest curator. 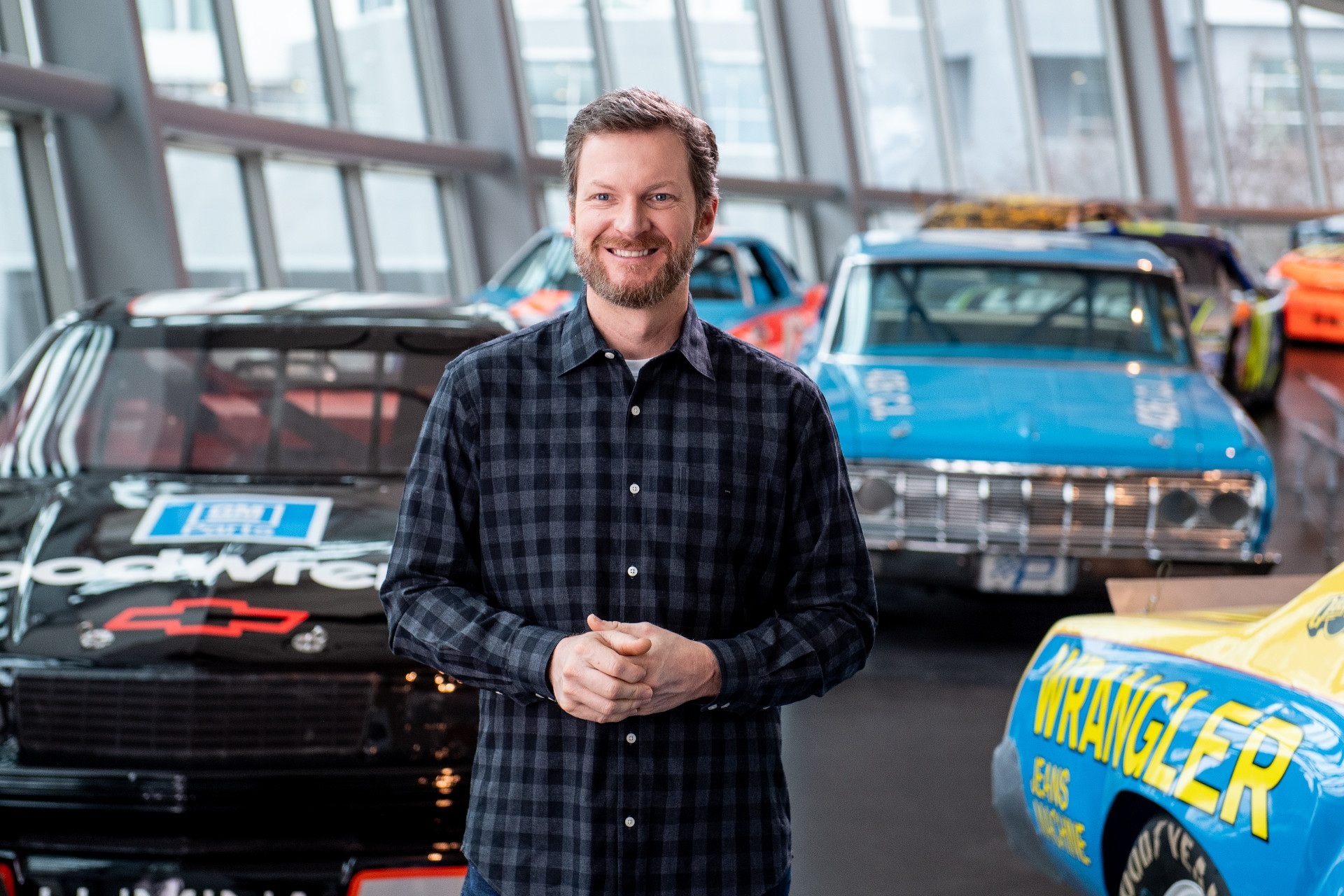 Now Earnhardt can add the title of “Guest Curator, NASCAR Hall of Fame,” to his already impressive resume. Earnhardt personally selected all 18 cars on the new Hall of Fame exhibit, “Dale Jr.: Glory Road Champions,” which will be on display until January 2023.

Included in the 18 on Glory Road are two cars each from the three seven-time NASCAR Cup Series champions, Hall of Famers Richard Petty (2010) and Dale Earnhardt (2010), along with Jimmie Johnson, who is still actively racing.

In an exclusive interview with Hall of Fame Curatorial Affairs Manager Tom Jensen, Earnhardt talked about the new Glory Road exhibit and why he selected the cars he did. Earnhardt’s passion and knowledge of the sport and its history, are obvious.

That’s why he was the perfect choice to assemble the cars for the new Glory Road. Excerpts from our interview follow. 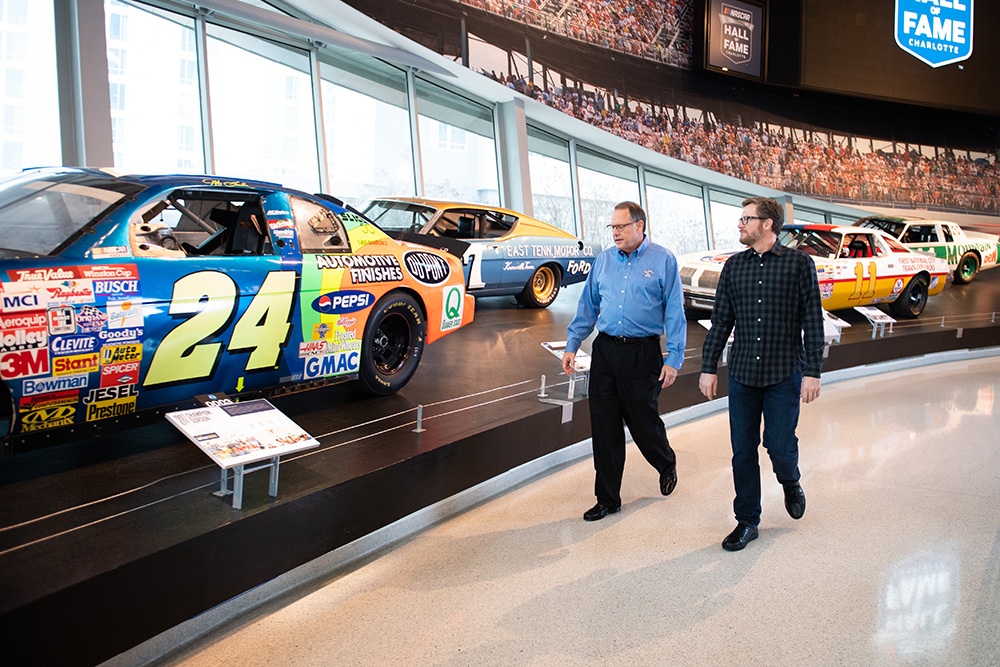 Tom Jensen: What were your criteria for selecting the cars?

Dale Earnhardt Jr: Obviously, not every car is available, so you get documentation of all the cars that are out there, and I guess you just kind of get a little selfish and think about which ones you liked. Maybe it’s the car. Maybe it’s nothing about the driver. Maybe it’s the paint scheme, maybe it’s that particular era, the ‘70s or the early ‘80s or whatever.

I picked cars for this exhibit for many different reasons. But I definitely wanted to represent a broad history of the sport as a whole, so we could also see the progression of the cars. It’s really cool when they’re all there together and you can see all that’s changed in the technology from where we started to where we are today.

I definitely wanted to represent a broad history of the sport as a whole, so we could also see the progression of the cars. 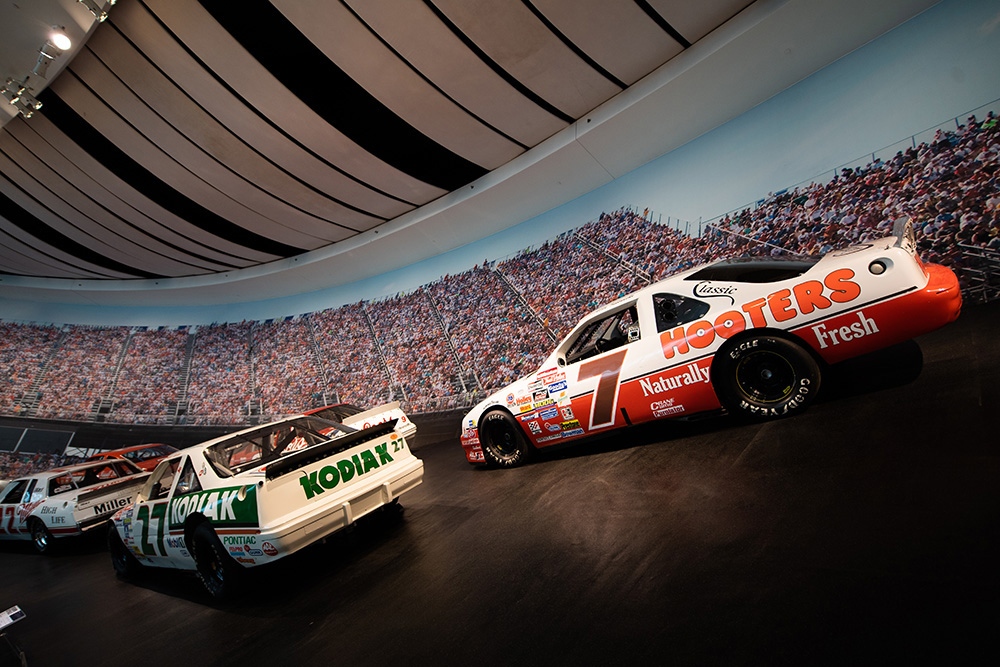 What does it mean to have your dad's first and last championship cars on Glory Road?

Well, it’s going to be great to have the first championship car up there, because it’s the car that Talladega had given to me, and we’ve actually taken that car and cleaned it up a little bit and re-decaled it and painted it, so I’ll have a personal invested interest in one of the cars up there. I’ll have a much more major connection to that car than any other car. So that’ll be very special for me. 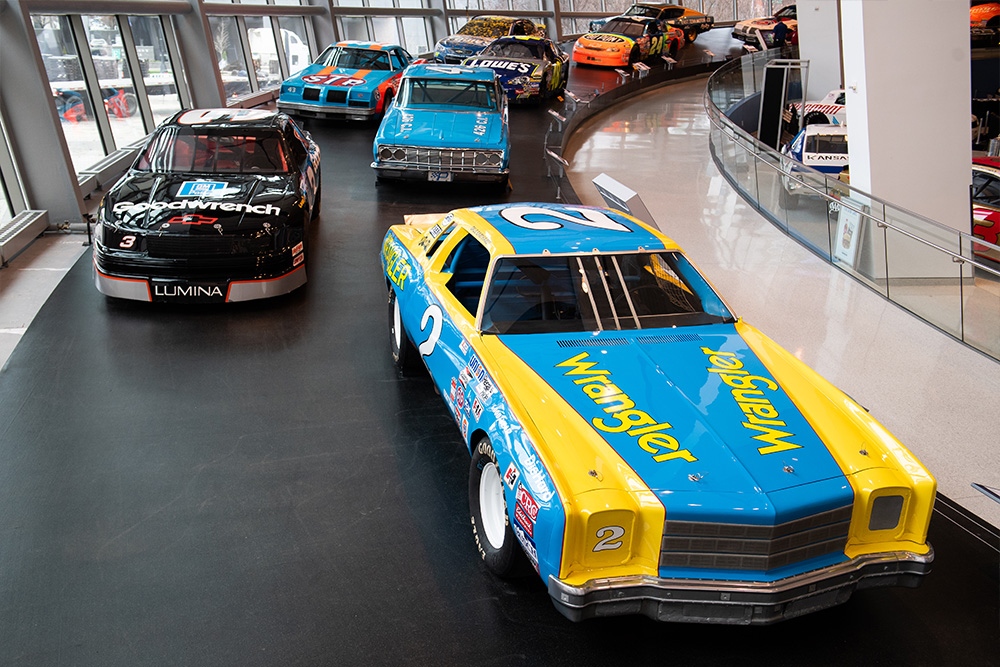 The three seven-time champions - Richard Petty, Dale Earnhardt and Jimmie Johnson have two cars each on Glory Road. Why?

I just felt they deserved to have the recognition to have two cars, if anybody did. Their careers and successes spanned such a large space in the sport, especially Richard Petty, that it made sense to have to cars up there to help sort of tell that story of champions.

I love being able to celebrate Jimmie and Richard. My dad was a seven-time champion, and I love to think of my father as the greatest who ever raced, but there’s two guys who accomplished as much as he did. There’s not many people who have won multiple championships, and here are three guys that have won seven.

Jimmie’s five in a row is the most impressive accomplishment I believe we have in our sport today. Jimmie’s a great guy, a great spokesman for our sport, represents our sport so well. And Richard Petty is Richard Petty. He’s still at the track today, still putting everything he has into NASCAR and being such an amazing ambassador for our sport.

So it’s awesome to be able to celebrate those guys. It would be very shortsighted of me to put two cars of Dad’s up there without putting two cars of theirs’ up there. They belong there, too. 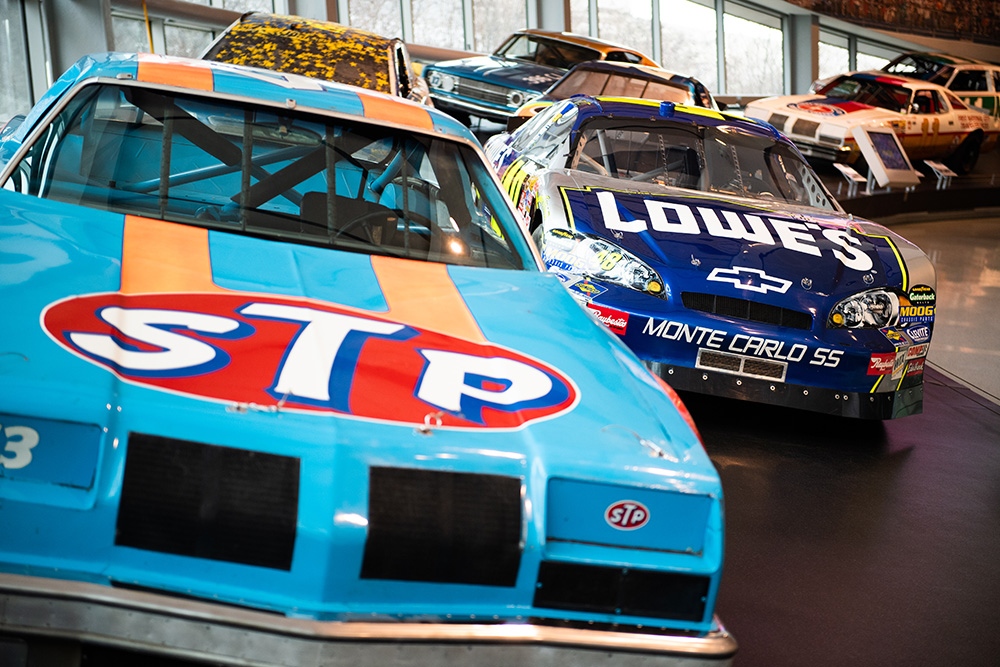 I love to think of my father as the greatest who ever raced, but there’s two guys who accomplished as much as he did.

Do you have a favorite year or era of race cars?

My favorite era of race cars is probably going to be the late ‘70s. I really enjoyed the ‘80s, lived it. The ‘80s were great. The cars were fun – old (Buick) Grand Nationals and (Chevrolet) Monte Carlo SS and all that was really amazing. But the late ‘70s for me, the Chevy Laguna, the 442 – there’s a couple of Oldsmobile 442s in the exhibit – I just love the character and body styles.

I also loved fashion and the personalities that we had in the sport. Where the sport was in its growth to me was interesting. It was still a bit of a niche thing … it was just starting to really get cool to like NASCAR and go to a NASCAR race or pull for a NASCAR driver. And they were starting to get into mainstream and pop culture. So that had to have been a really interesting time for the sport. I would have loved to have been at the race track and walking around in the garage back in the late ‘70s and seeing what everyone was doing. 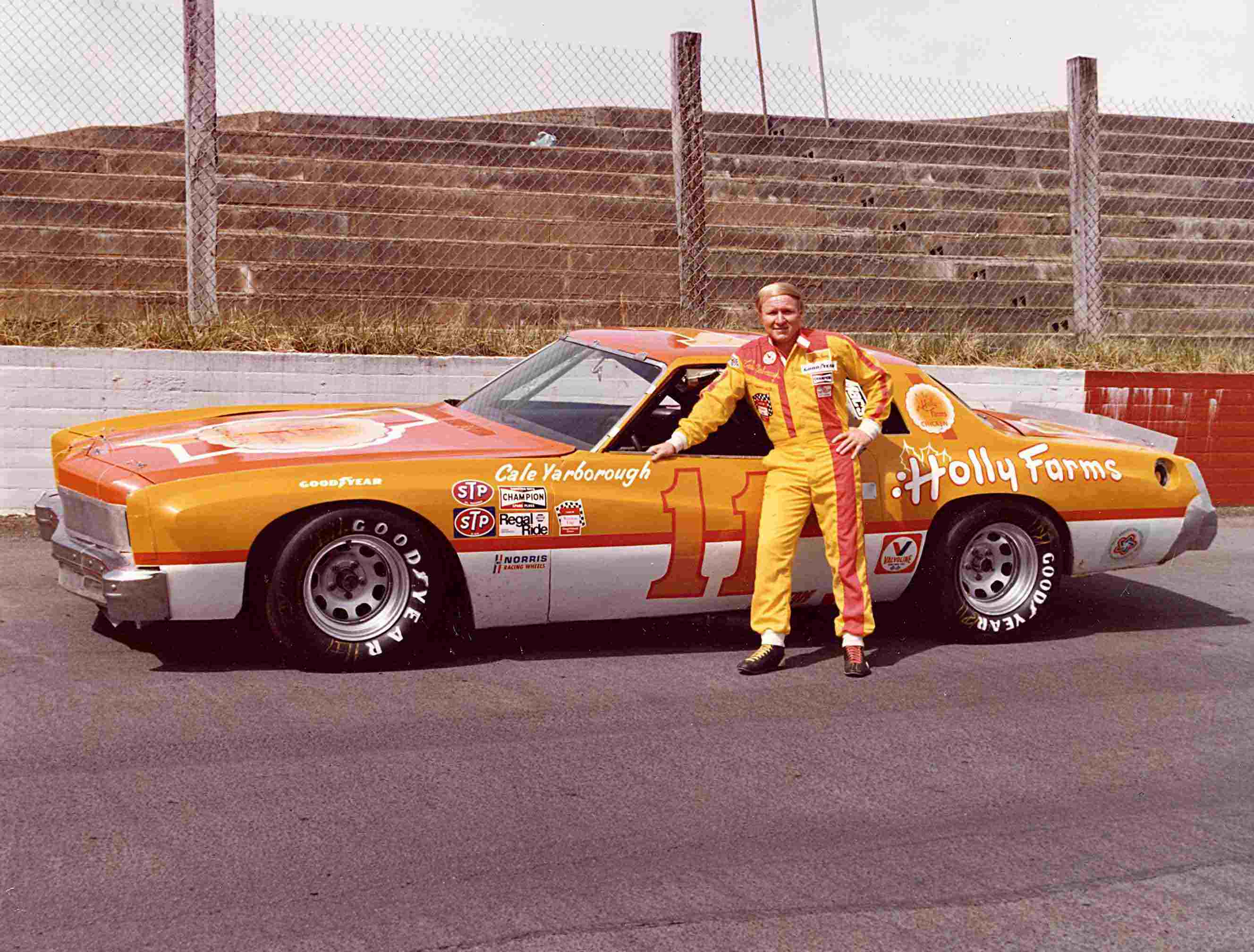 Dale Earnhardt Jr's favorite era in NASCAR is the late 70's. Cale Yarborough stands next to his Chevrolet. Photo courtesy of Getty Images

Why is having real race cars in the exhibit and not just show cars important to you?

It’s obviously much cooler when you’re standing there looking at an exhibit and the car that you’re looking at is the car, the car that actually ran that race or won that championship or competed. The recreations are great and sometimes that’s all you can do in certain cases. And they’re commendable for sure, but it has to be a much more personal experience and worth the time to go and visit the Hall of Fame when you can see the actual car that competed. The fact that they even exist, I just … I think this is something that’s a passion of mine that sort of caught fire over the last several years. 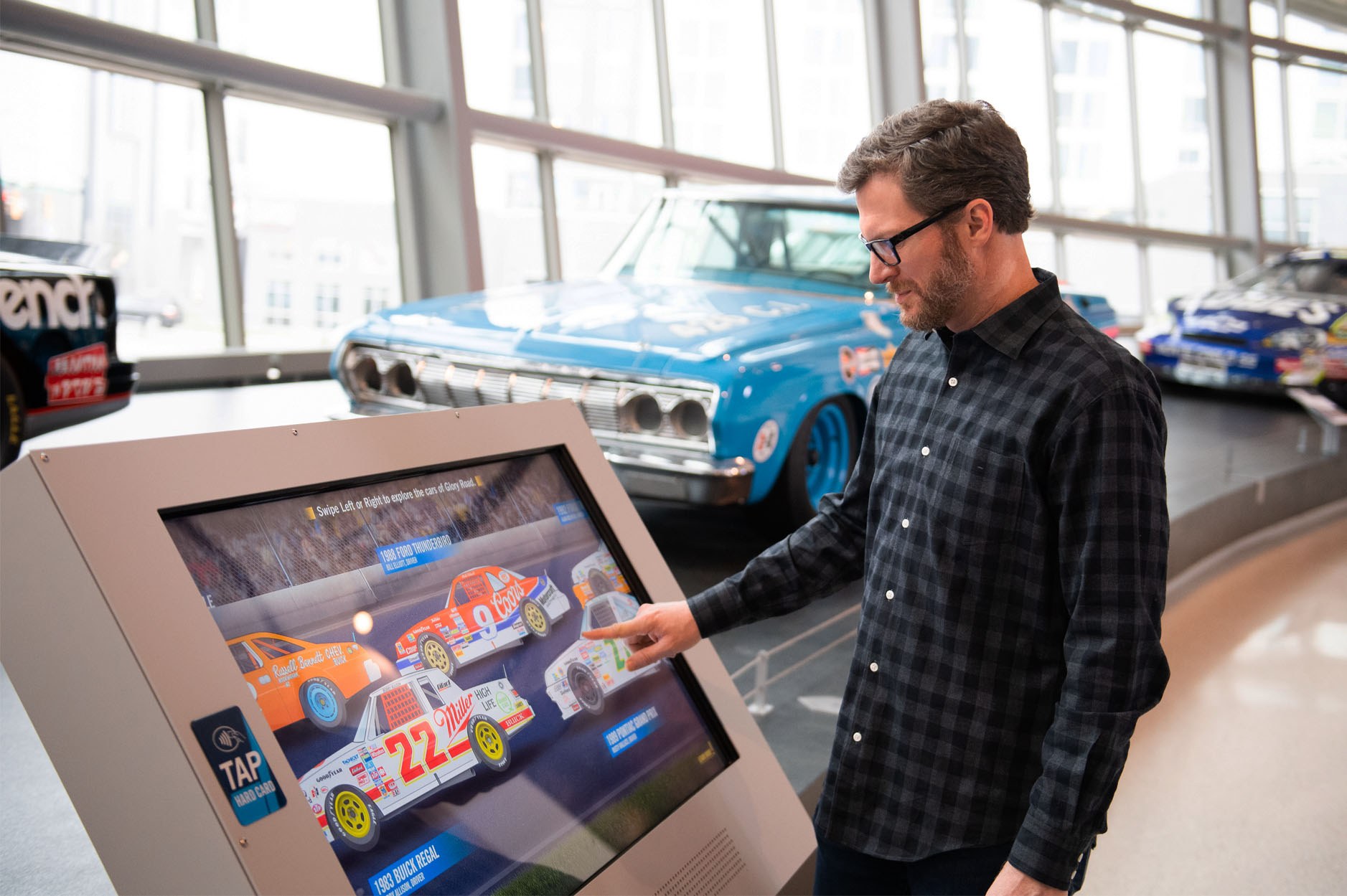 Dale Jr. also had time to explore the new interactives at the Hall of Fame. Photo credit: Jamey Price

I’ve got a couple of cars that I’m working on – one’s going to be in the exhibit – that are cars my Dad drove. And I’ve been getting closer in friendship with (Hall of Famer) Ray Evernham (2018), who’s also put a lot of effort in restoring and maintaining history, historic cars with real racing history.

This stuff, it’s one of a kind. These cars that will be on this exhibit, there’s not another car like it out there. It’s something we should hold dear and cherish and protect. I think to be able to say, like, when somebody walks into the Hall of Fame and you tell them about this exhibit and show them that it’s champions, they know those are the cars. That makes it real. That makes it legitimate that those cars have that history.