The first race at a new NASCAR track was the sport’s first on Halloween and a final taste of glory for a legendary wheelman. 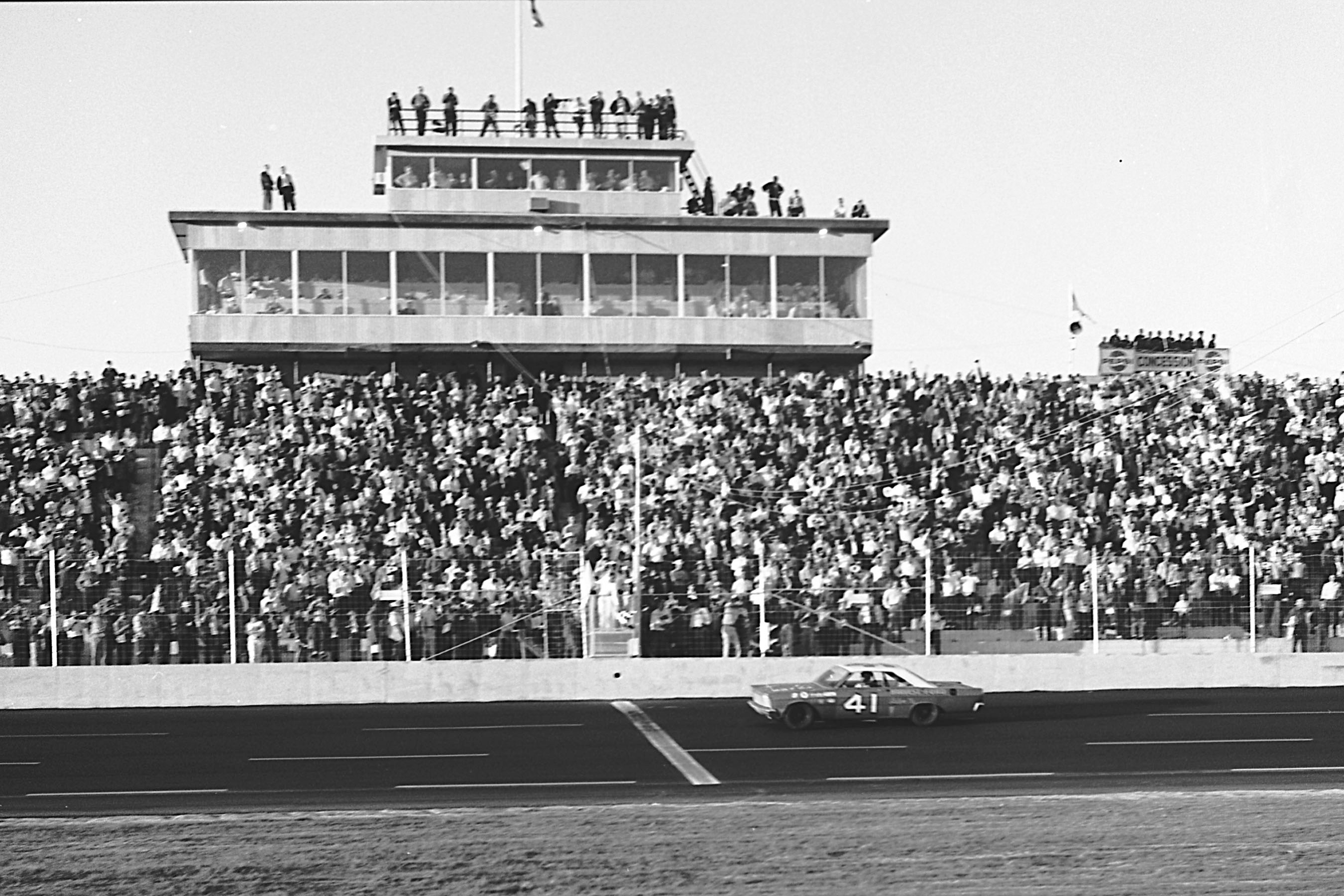 In a first race at a new track a NASCAR star won for the final time. Photo courtesy of NASCAR Archives & Research Center via Getty Images.

In the entire 73-year history of NASCAR, the premier series has raced on Halloween just five times, the first coming in 1965 when North Carolina Motor Speedway in Rockingham hosted the American 500.

The race was historically significant for several reasons. First, it was the inaugural race at Rockingham, which would go on to host 78 premier series races before becoming a casualty of NASCAR’s expansion into bigger markets in 2005.

Some 35,000 fans showed up for the first race, a huge crowd, given the track’s relative isolation in rural North Carolina.

Another significant factor was that the winner was Hall of Famer Curtis Turner (2016), who was driving the No. 41 Ford Galaxie fielded by fellow Hall of Famers Glen (2012) and Leonard Wood (2013) and the Wood Brothers Racing team.

Turner had been banned for life by NASCAR founder and Chairman William H.G. France (2010) in 1961 for attempting to unionize the drivers. In 1965, France lifted the ban, allowing Turner to return to competition.

Turner had been banned for life by NASCAR founder and Chairman William H.G. France in 1961 for attempting to unionize the drivers.

In the late 1950s and early ‘60s, Turner was one of the sport’s biggest attractions, a swashbuckling Virginian who grew up running moonshine and made and lost fortunes in the timber industry. A man with deft car control and a larger-than-life personality, Turner’s return was welcomed by race fans eager to see him work his magic again.

The Rockingham race was the penultimate event on NASCAR’s 55-race schedule, and it was Turner’s first victory since winning on the 0.500-mile Concord (North Carolina) Speedway on March 8, 1959. So Turner’s Halloween triumph at “The Rock” broke a drought of more than six-and-a-half years, an eternity in auto racing.

At Rockingham, Turner won by a margin of 11 seconds over Cale Yarborough (2012) in a Banjo Matthews-owned Ford. Coming in third was Marvin Panch in the No. 21 Wood Brothers Racing Ford. Turner’s triumph was worth $13,090.

Turner would compete in 31 races over the next three seasons, but Rockingham would be his 17th and final career premier series win, a memory cherished by the driver, the team and a lot of NASCAR race fans.

The rest of this week in NASCAR: 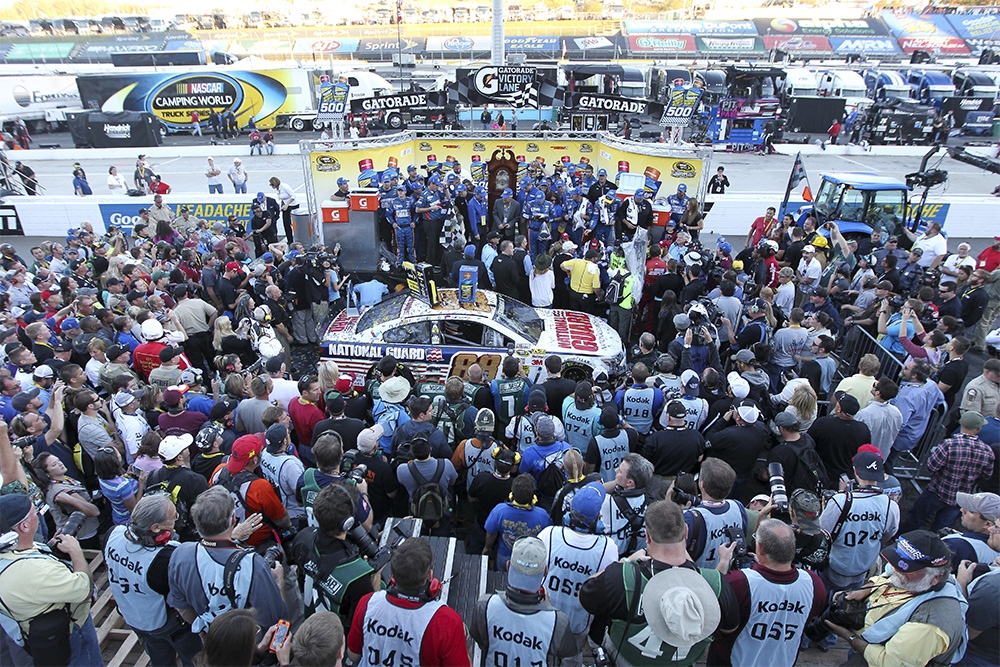 Dale Earnhardt Jr. was greeted by a huge throng after winning at Martinsville. Photo courtesy of NASCAR Archives & Research Center via Getty Images

Even though it’s short and slow, Martinsville Speedway is one of the tracks that every driver wants to win at, and that’s exactly what Hall of Famer Dale Earnhardt Jr. (2021) did in the Goody’s Headache Relief Shot 500. Driving the No. 88 Hendrick Motorsports Chevrolet, Earnhardt won by 0.344 seconds over his teammate and fellow Hall of Famer Jeff Gordon (2019). Earnhardt led 79 laps to capture the $155,125 first-place money and the famed grandfather clock trophy. The victory was the fourth of the year for Earnhardt, who had earlier won the Daytona 500 and both Pocono races. 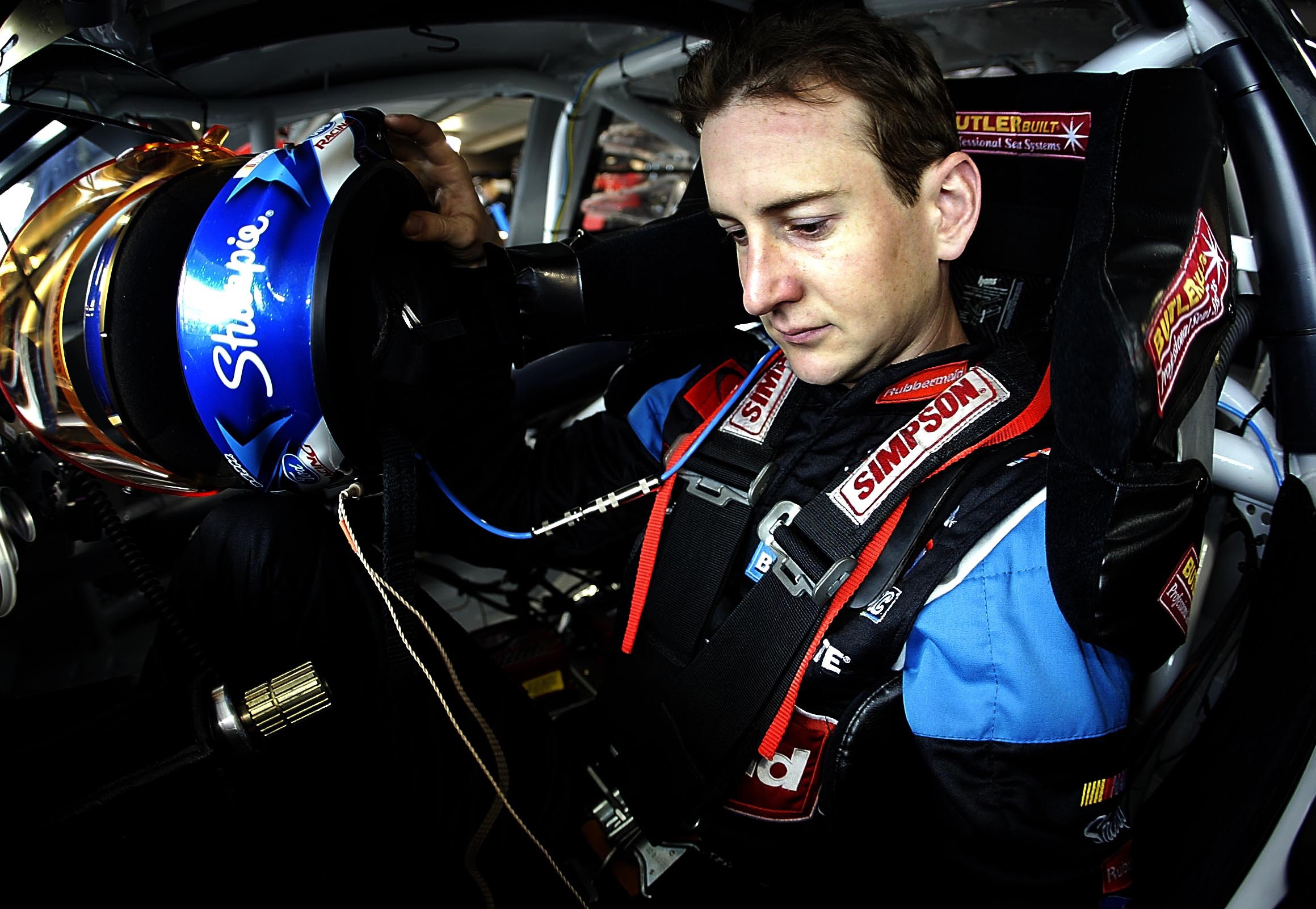 Driving for Hall of Fame team owner Jack Roush (2019) in the No. 97 Ford Taurus, second-year premier series driver Kurt Busch led 84 of 248 laps to capture the rain-shortened NAPA 500 at Atlanta Motor Speedway over Joe Nemechek. The next four drivers behind Nemechek were all Hall of Famers: Dale Jarrett (2014) finished third, followed by Tony Stewart (2020), Dale Earnhardt Jr. (2021) and Jeff Gordon (2019). The victory, just the third of Busch’s young career, was worth $212,100. Fourteen of the top 15 finishers drove for teams owned by Hall of Famers. 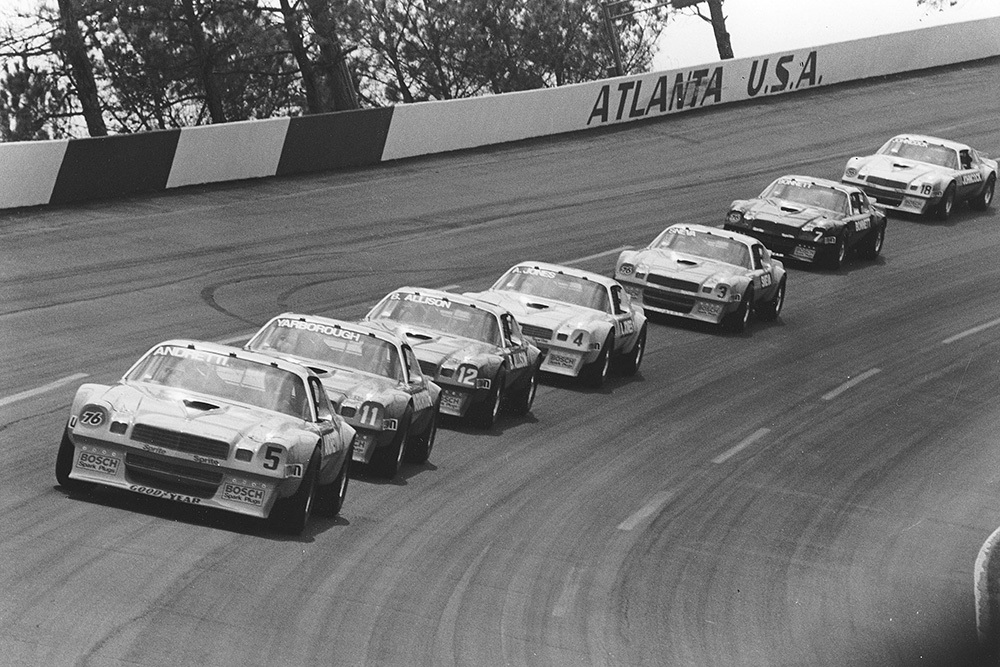 The stars of NASCAR showed up well in the final road race of the 1980 International Race of Champions (IROC) season at Riverside International Raceway in Southern California. There, Darrell Waltrip (2012) beat fellow Hall of Famer Bobby Allison (2011) by 1.48 seconds in the 30-lap battle on the 2.54-mile road course. Even though the race was run in 1979, it counted in the 1980 IROC championship—which Allison later claimed. Waltrip was the runner-up. 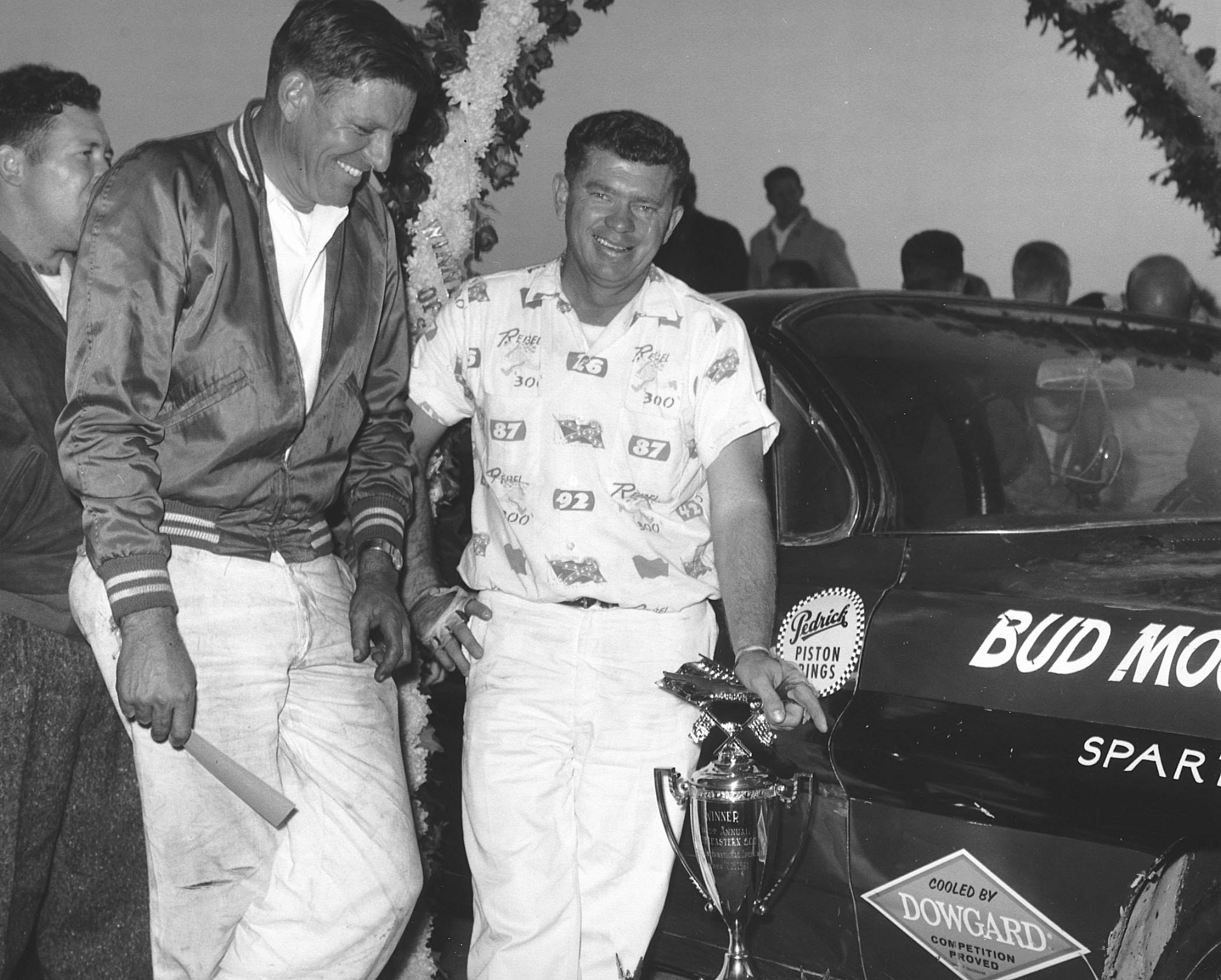 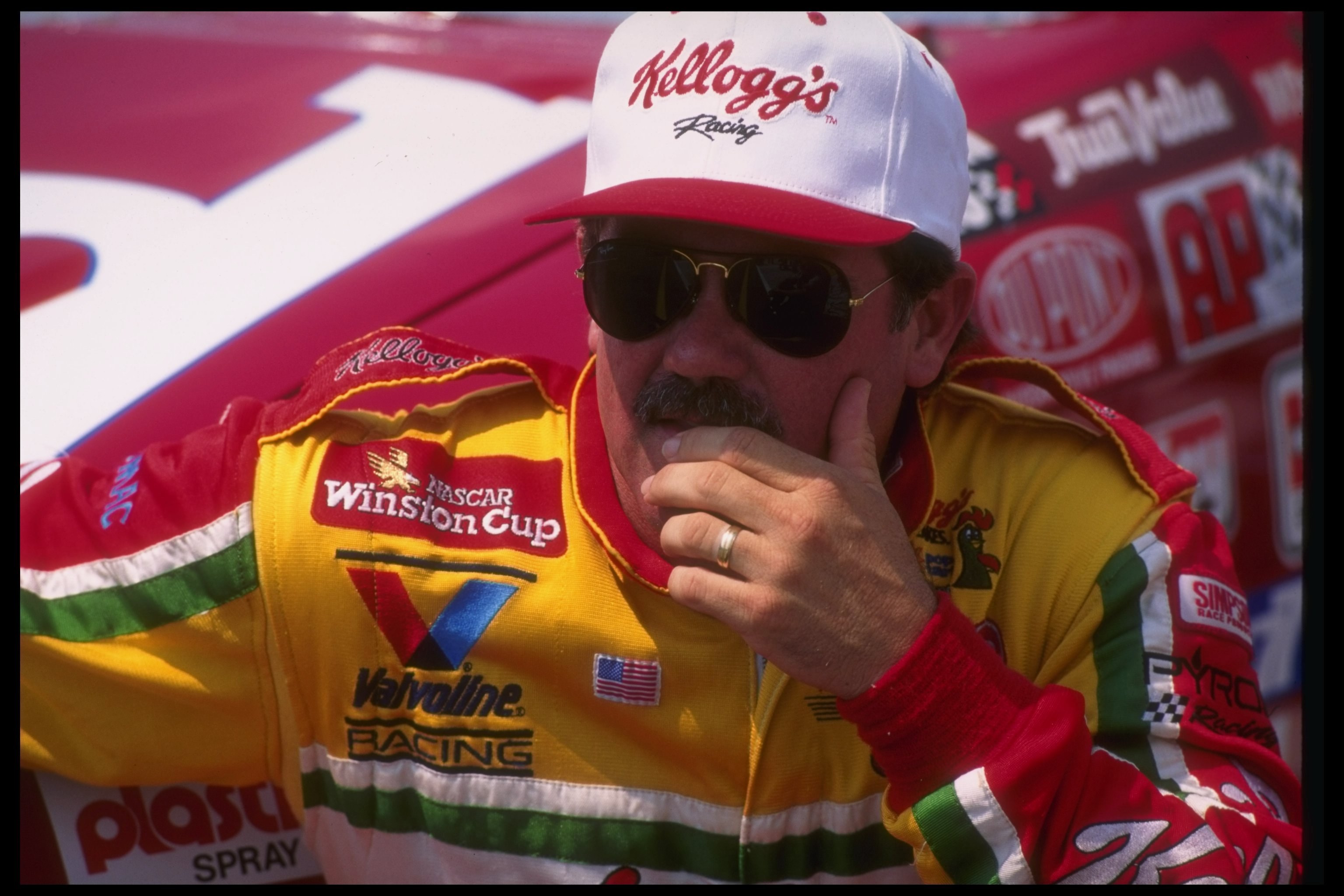 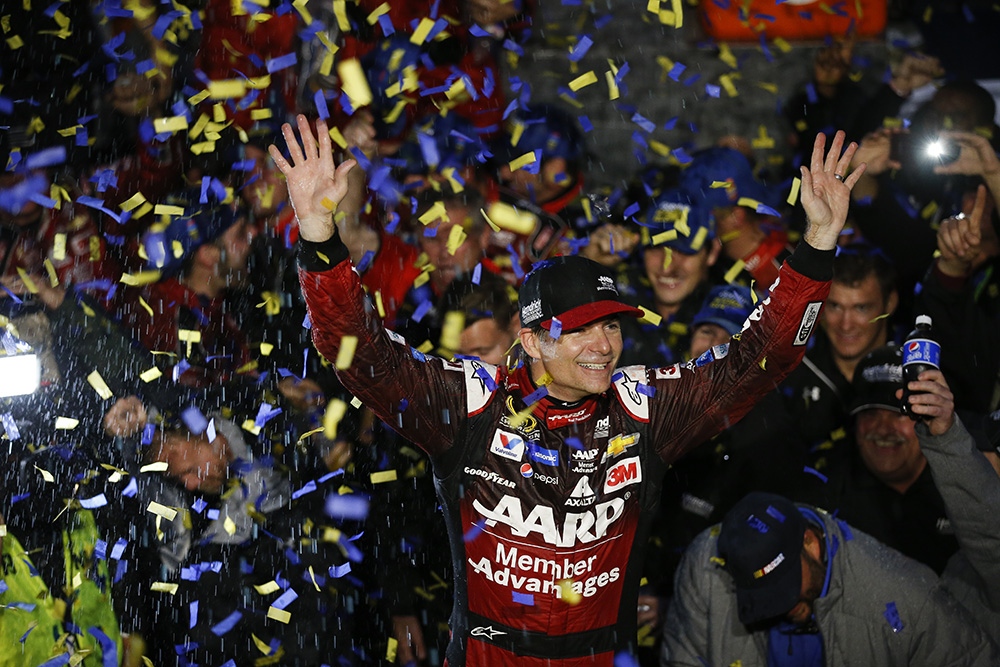 Jeff Gordon’s final victory was one of his most emotional as well. Photo courtesy of NASCAR Archives & Research Center via Getty Images.

Martinsville (Virginia) Speedway was Hall of Famer Jeff Gordon’s (2019) favorite track and his most productive, too. Gordon earned nine of his 93 career premier series race victories at the tiny, paper-clip-shaped 0.526-mile track, making it the single track where the four-time champion won the most races. Gordon’s 93rd and final career victory came in the Goody’s Headache Relief Shot 500, where he passed A.J. Allmendinger with 22 laps to go to secure a hugely emotional victory. With the win came $199,836 and, perhaps more importantly, a chance to race for a championship in the season-finale at Homestead-Miami Speedway.