Back on the premier series schedule for the first time in 27 years, North Wilkesboro Speedway was there when NASCAR began.

North Wilkesboro Speedway is back.

After last hosting a premier series race in 1996, the fabled short track deep in the heart of North Carolina moonshine country will be the home to the 2023 NASCAR All-Star Race.

The return to the 0.625-mile North Wilkesboro track is a return to some of NASCAR’s oldest and deepest roots. Located in the western part of the state, Wilkes County, was once known as “The Moonshine Capital of the World.” 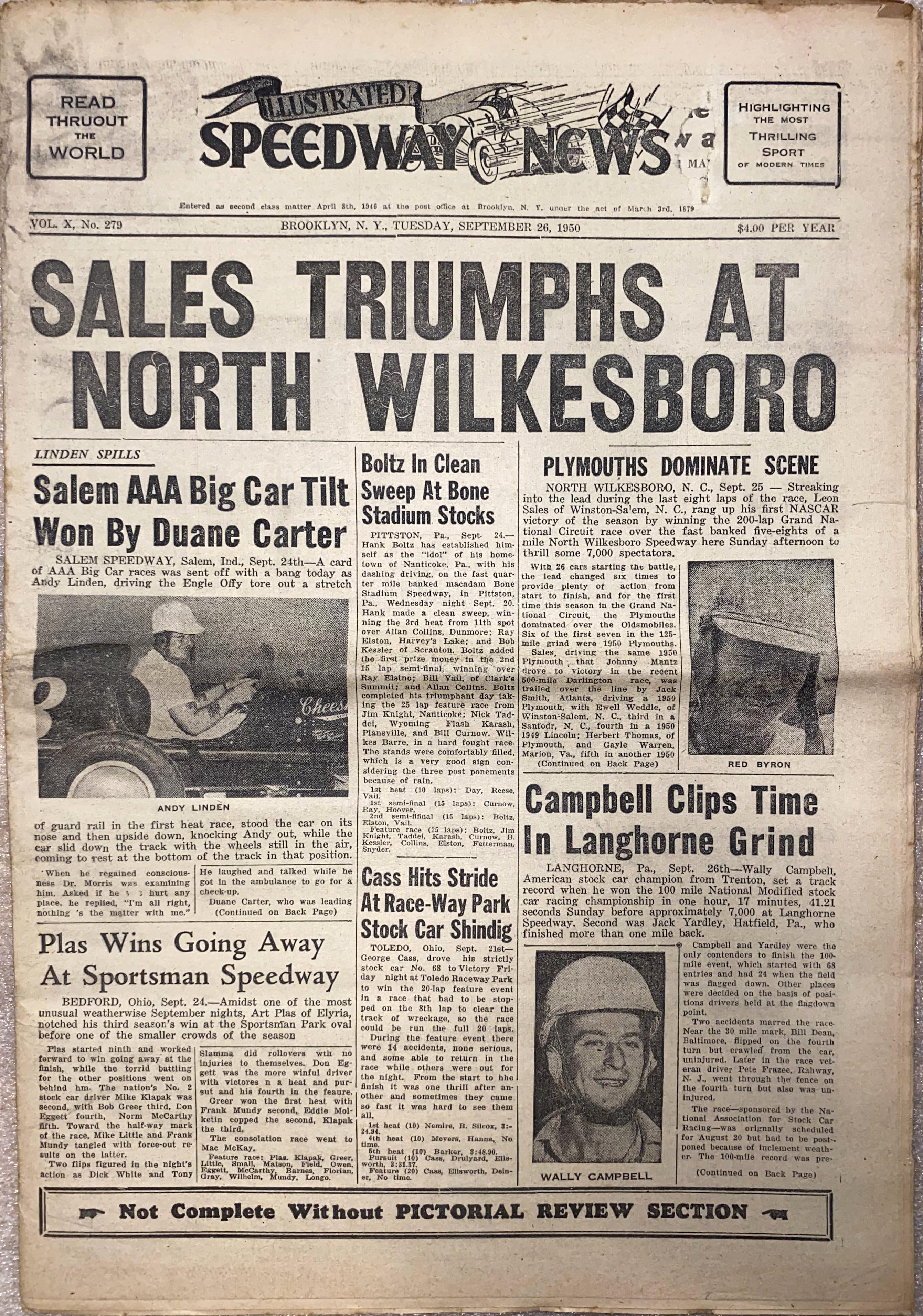 And its most famous native, Hall of Famer Junior Johnson (2010), was regarded as one of the best moonshine runners ever. A full-sized moonshine still designed and built by Johnson has been on display in the NASCAR Hall of Fame since the facility opened in 2010. An aside: Johnson came to the Hall and assembled his still using only a pipe wrench and pliers.

Given the region’s love of fast cars and illegal liquor, it’s no surprise that North Wilkesboro was one of the sport’s oldest tracks. The track hosted a Modified Division race in NASCAR’s first season of 1948 then added Strictly Stock races when that series was launched a year later. 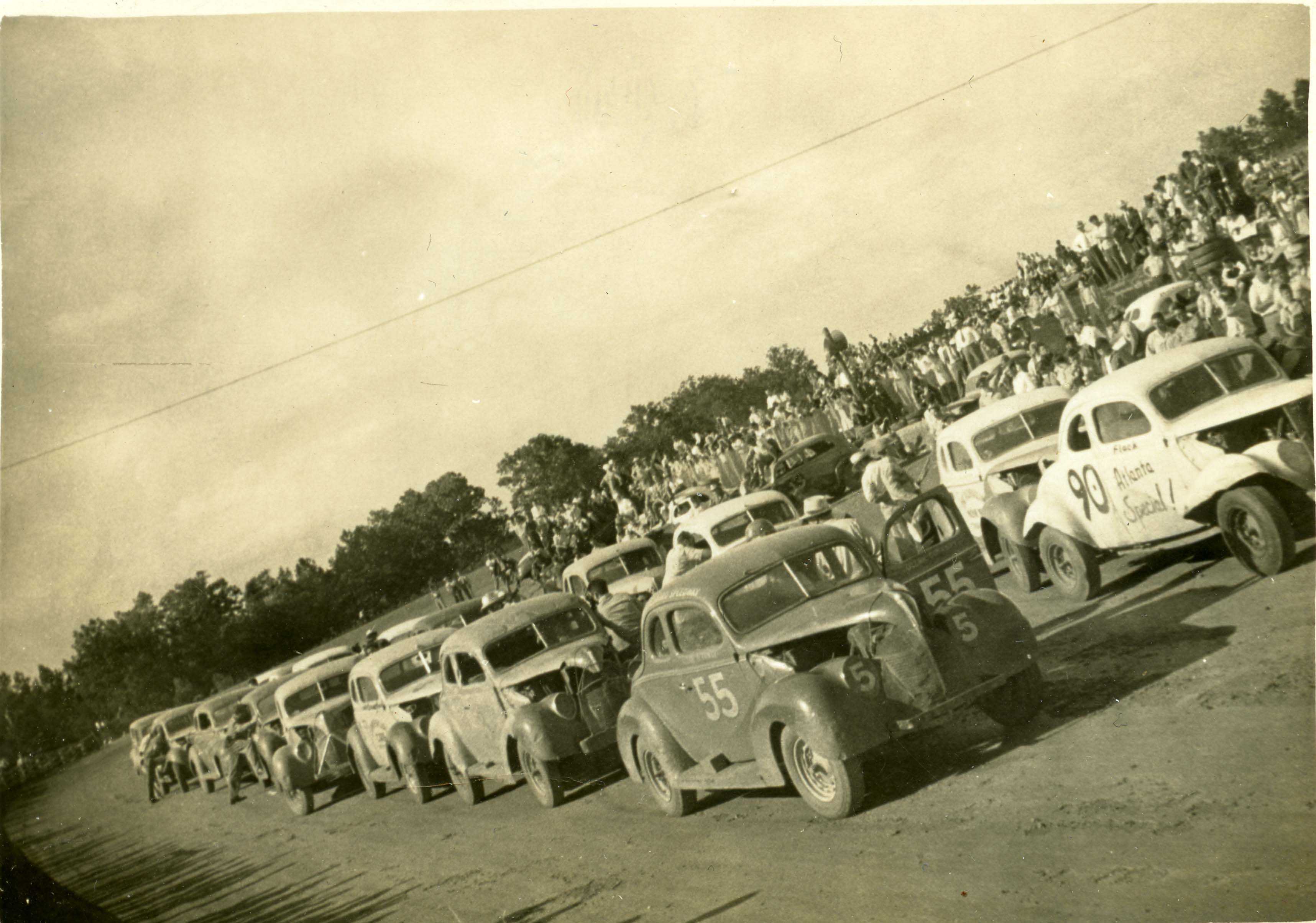 The field lines up for a race at North Wilkesboro Speedway in the late 1940s. NASCAR Hall of Fame Permanent Collection, Courtesy of Glenn Kelley

North Wilkesboro Speedway hosted its first race on May 18, 1947, nearly a year before the founding of NASCAR. Like almost all the tracks in the post-World War II Southeast, North Wilkesboro was a dusty dirt track when it opened. The racing surface was not paved until 1957. 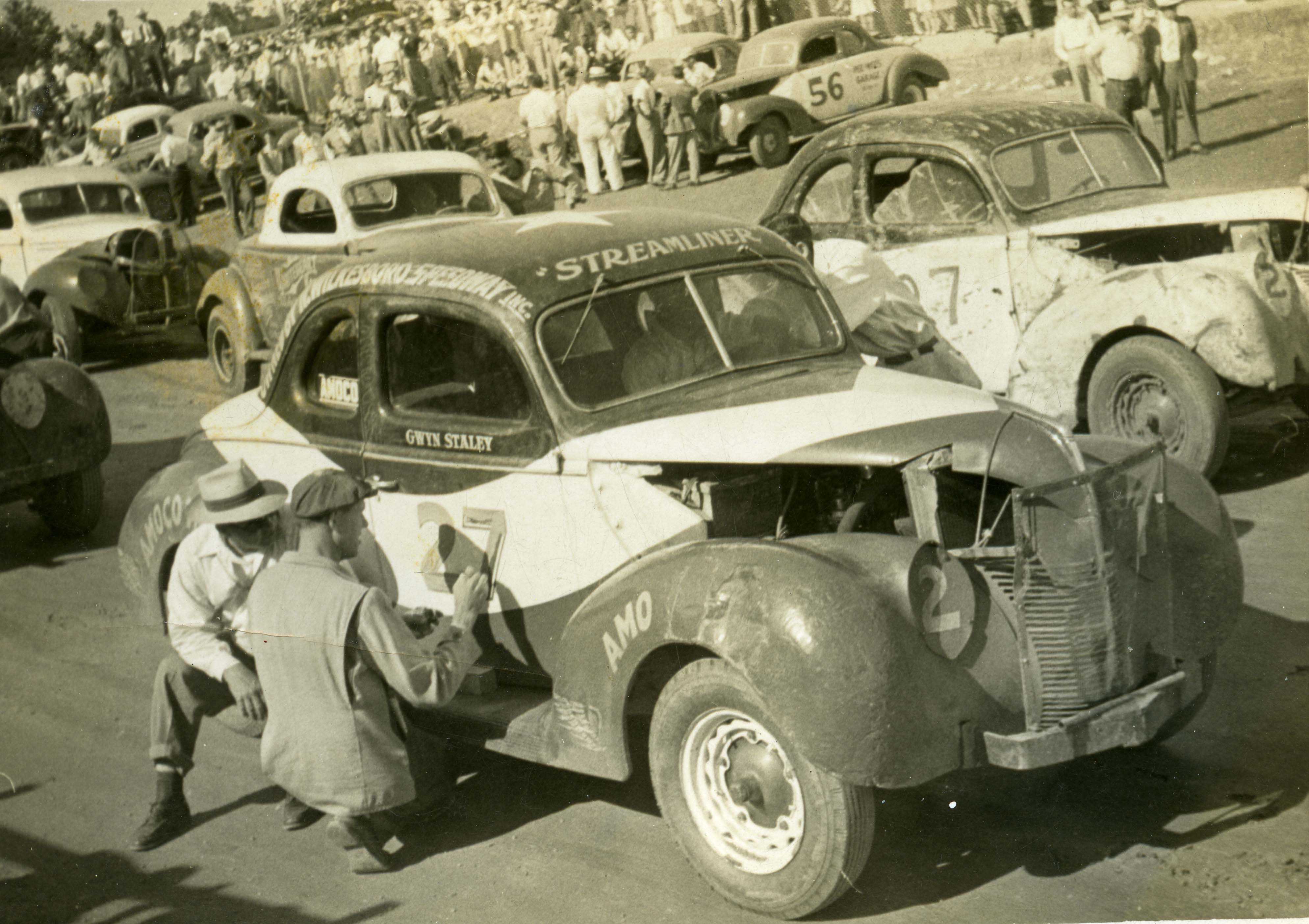 NASCAR founder and chairman William H.G. France hand painted the number on the side of Gwyn Staley’s race car prior to an early race at North Wilkesboro. NASCAR Hall of Fame Collection, Courtesy of Glenn Kelley

In the earliest days of NASCAR, survival for the sanctioning body depended on forming strong bonds with local track owners and promoters like North Wilkesboro’s Enoch Staley. From the very start, North Wilkesboro was a fixture on the NASCAR schedule, hosting one premier series race in both 1950 and ’51, and then two races a year from 1951 onward. 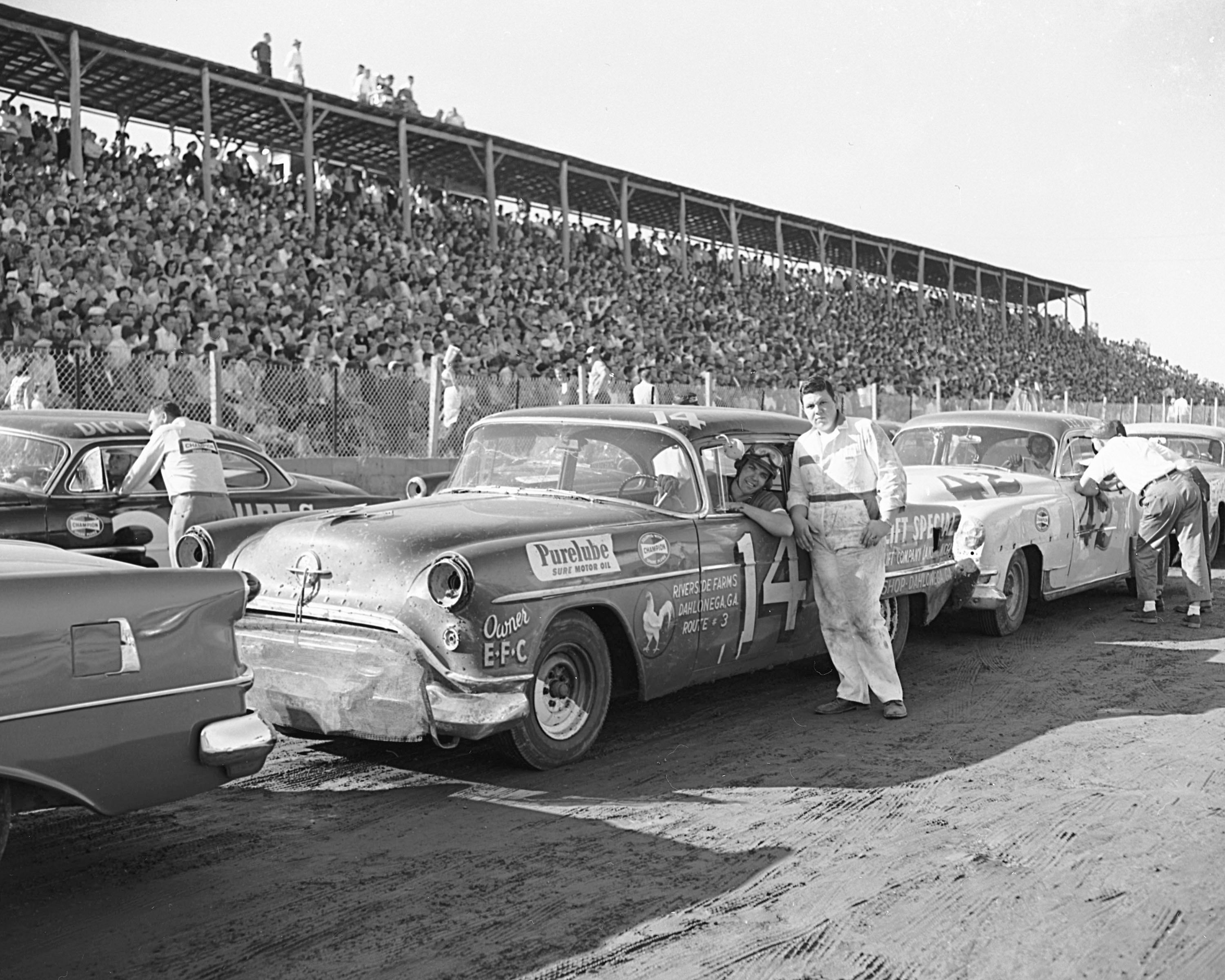 Oregon racer Hershel McGriff, a member of the NASCAR Hall of Fame Class of 2023, scored one of his four premier series race wins in 1954 during the fall race at North Wilkesboro, where he held off two members of the Hall’s Class of 2013, runner-up Buck Baker and third-place Herb Thomas. 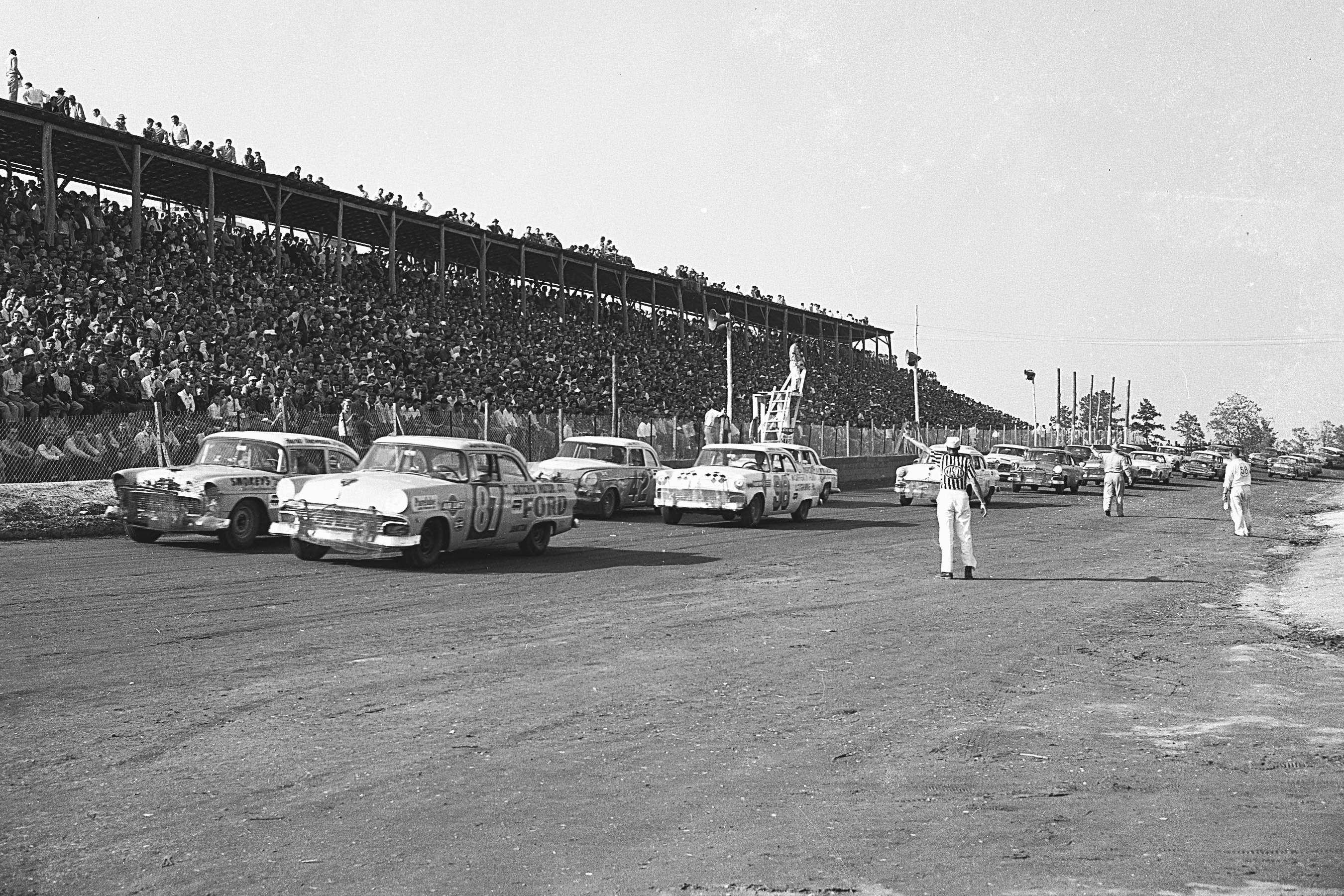 Buck Baker rarely raced Fords, but he won at North Wilkesboro in 1955 behind the wheel of Pete DePaolo’s Ford. Photo courtesy of NASCAR Archives & Research Center

Buck Baker won the 1956 premier series championship in a Carl Kiekhaefer-owned Chrysler and won the ’57 title in his own “Black Widow” Chevrolet, a replica of which is on display at the NASCAR Hall of Fame as part of our “Dale Jr.: Glory Road Champions” exhibit. But in 1955, Baker swept at North Wilkesboro, winning the spring race in an Oldsmobile and the fall race from the pole in a Ford. 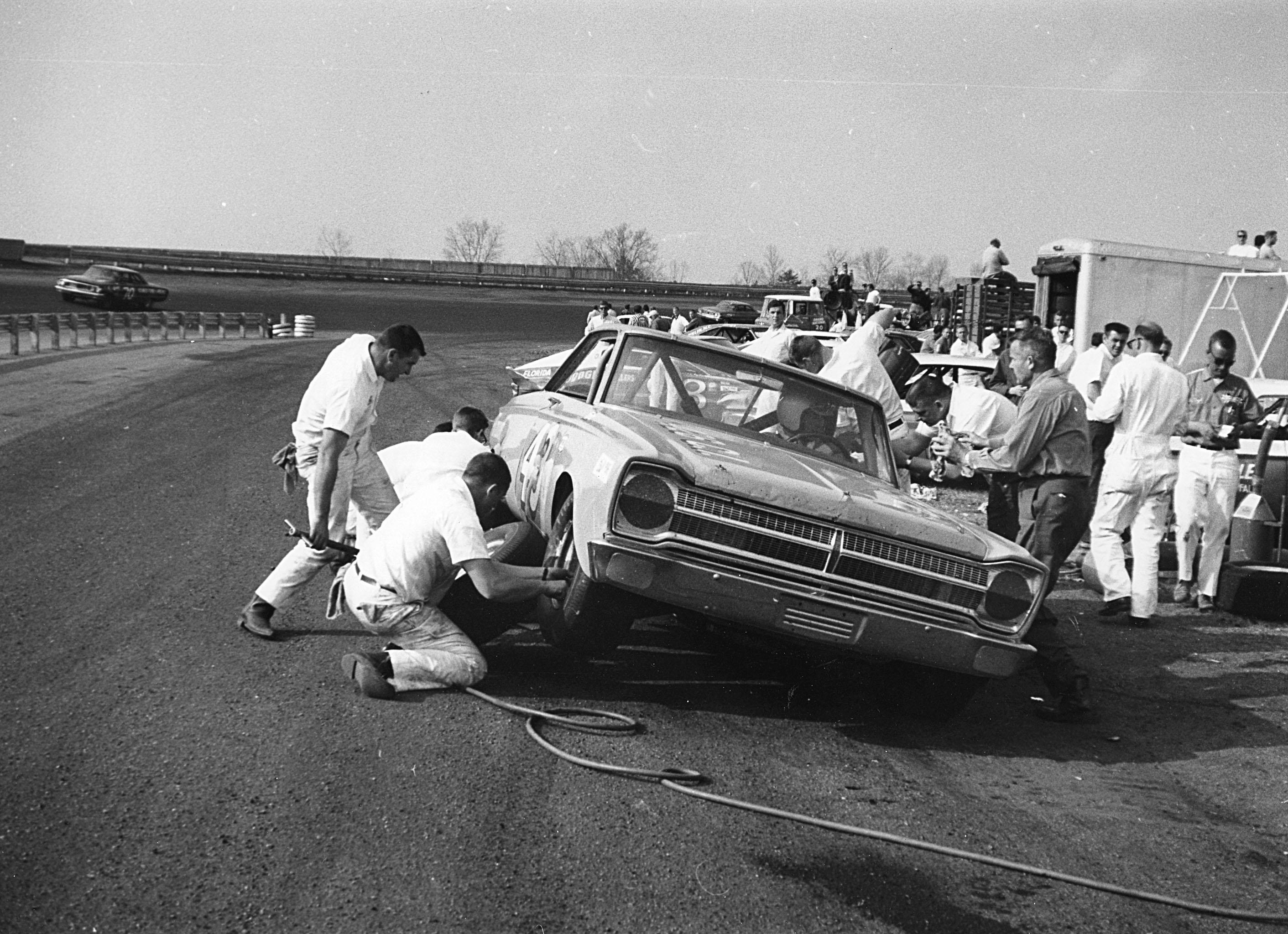 Fit For The King 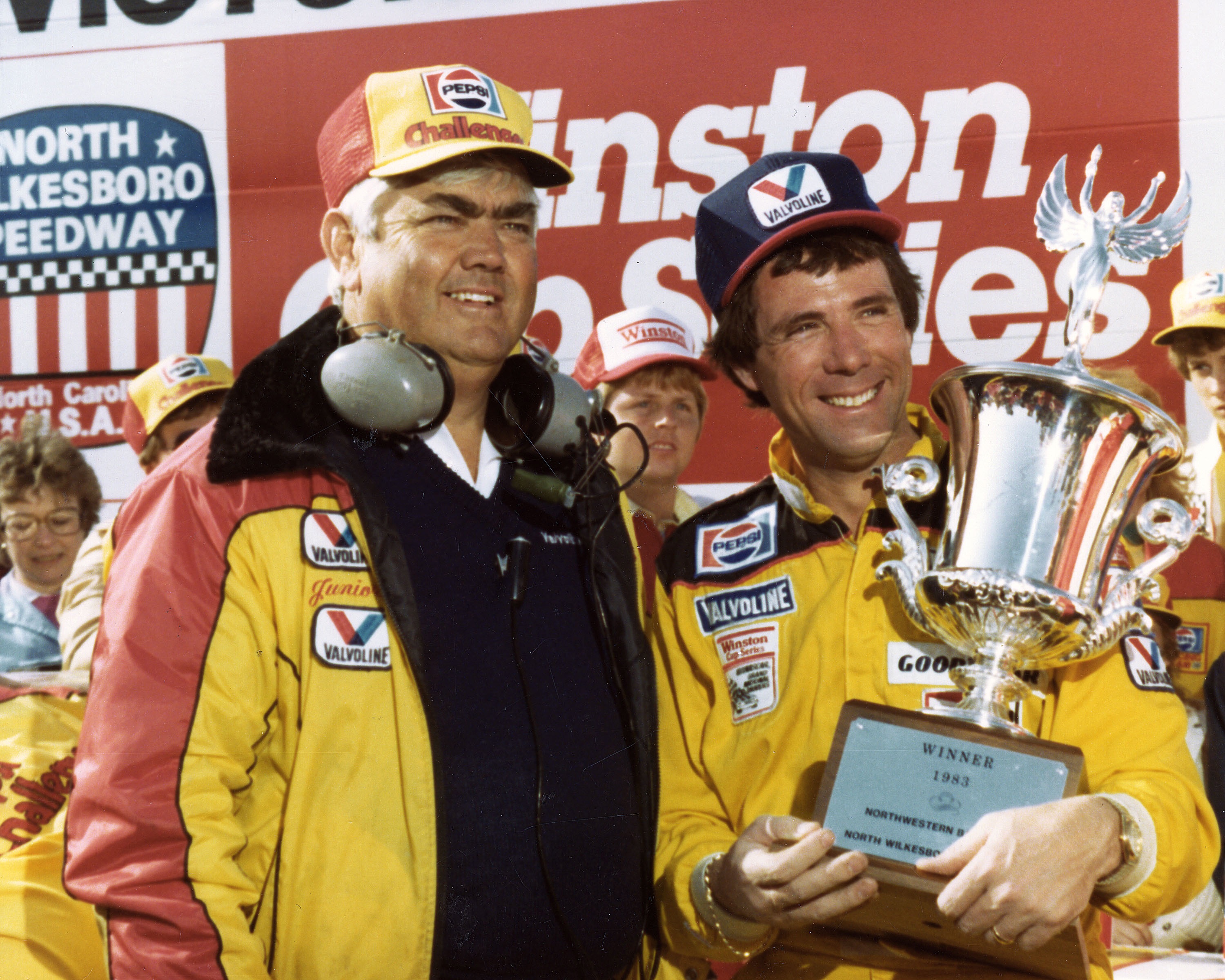 Given that team owner Junior Johnson’s home track was North Wilkesboro Speedway, it was important for his cars to run well there. And they did. From 1976-78, Cale Yarborough (2012) won four times in Johnson’s cars. Yarborough’s replacement, Darrell Waltrip (2012) did even better, winning five straight races at North Wilkesboro from 1981-83. 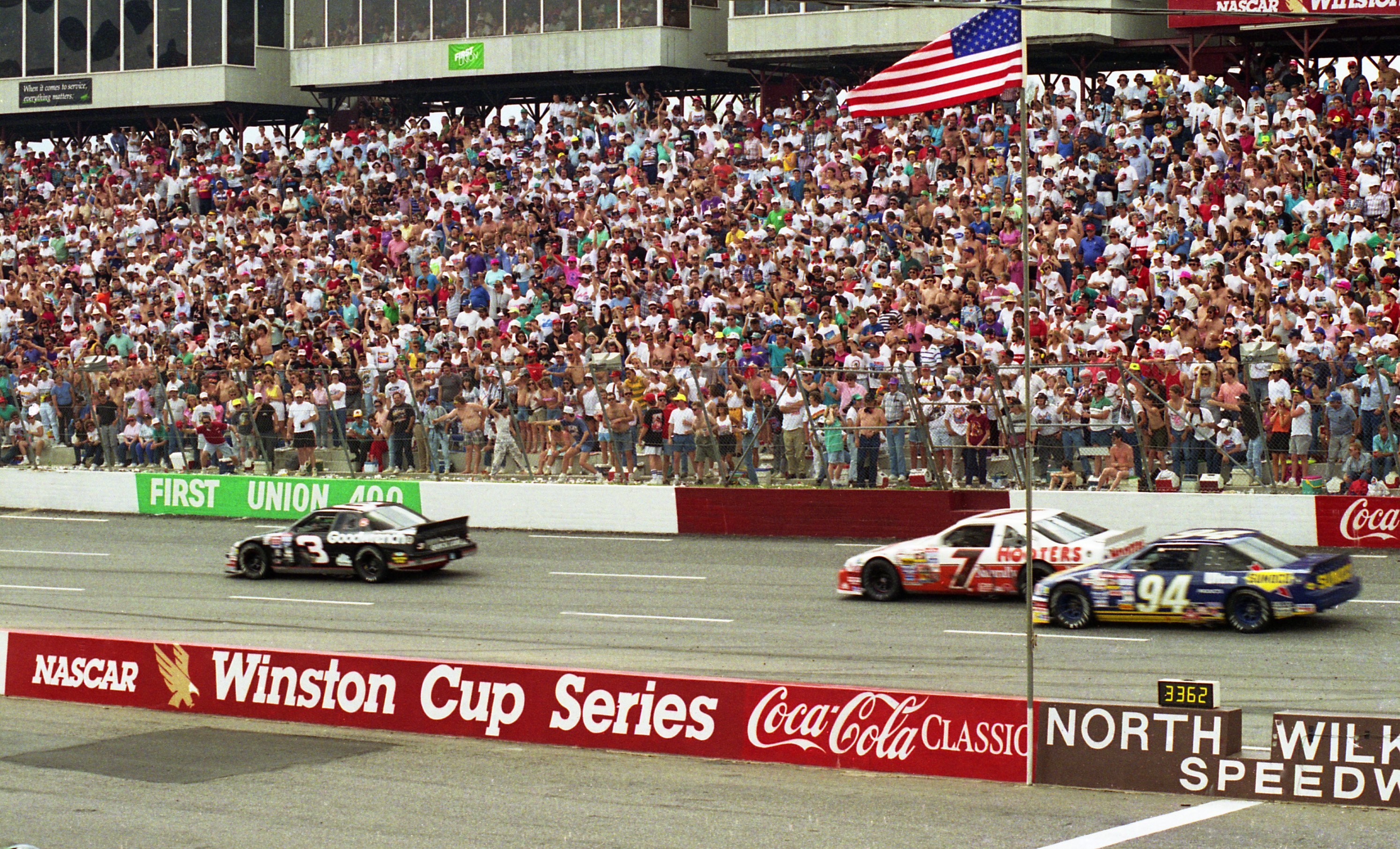 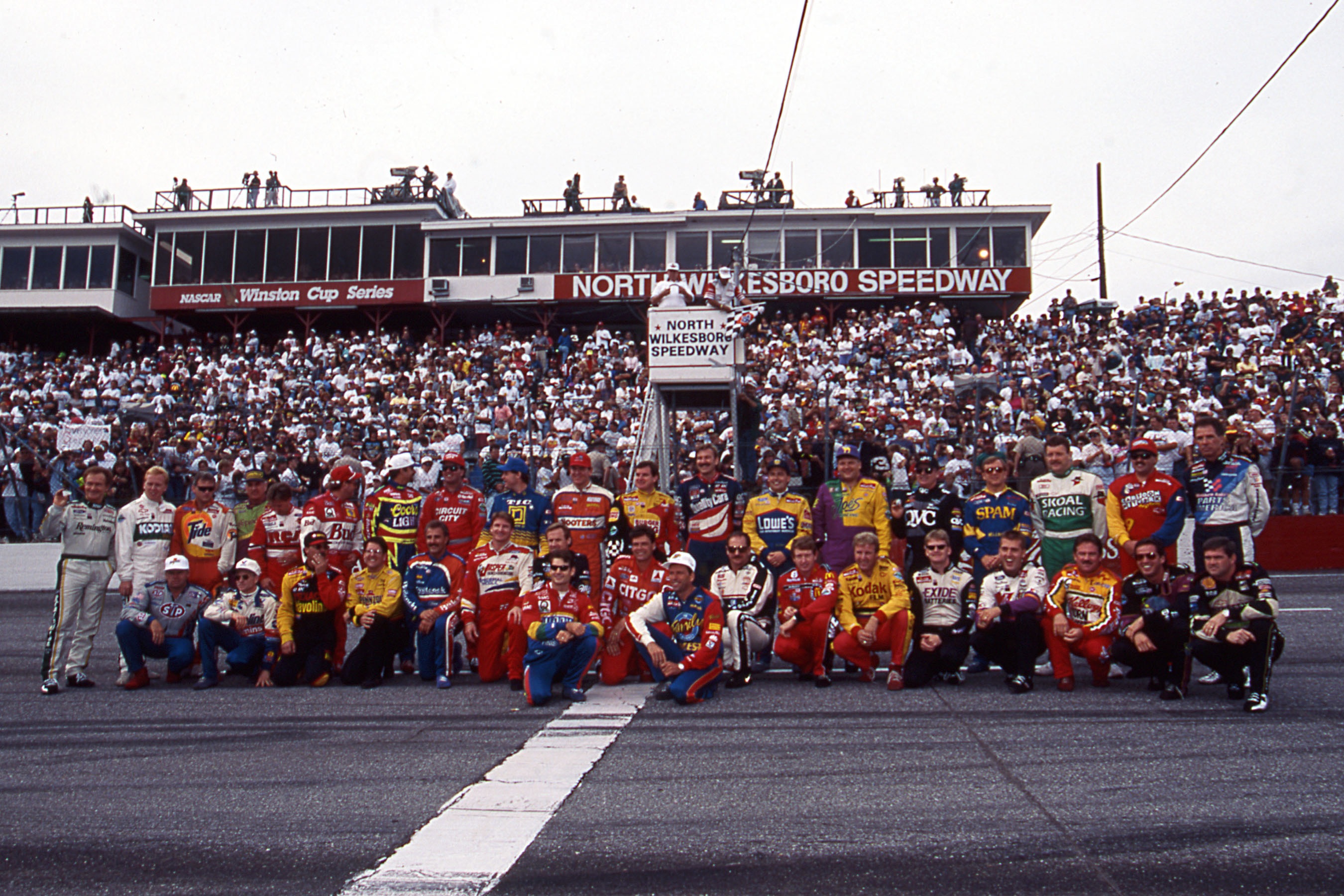 For the final race at North Wilkesboro, NASCAR got all the drivers together for one last photo at the historic track. Photo courtesy of NASCAR Archives & Research Center via Getty Images

On September 29, 1996, North Wilkesboro hosted what was thought to be its final premier series race, the Tyson Holly Farms 400.

Although Ted Musgrave qualified on the pole, he never led a lap as the race quickly turned out to be a battle between two of the sport’s all-time greats, Hall of Famers Dale Earnhardt (2010) and Jeff Gordon (2019). Between them, the two rivals paced the field for 242 of 400 laps, leading a total of 10 times. Gordon and Earnhardt traded the lead four times in the final 142 laps, when they were the only drivers out front.

Gordon made the race-winning pass on Lap 322, when he pushed his rainbow-colored No. 24 Hendrick Motorsports Chevrolet ahead of Earnhardt and the black No. 3 Richard Childress Racing Chevrolet. The victory, which marked North Wilkesboro’s final chapter, was one of the 13 on the season for Gordon, tying him with Richard Petty for the most wins in a season during NASCAR’s Modern Era.

And about that moonshine connection: Back in the day, when reporters covered races at North Wilkesboro, after their work was finished for the night and they were heading out the door, the track’s operators would open a couple of refrigerators and hand out gallon milk jugs filled with Cherry Bounce, Apple Jack or other flavors of genuine Wilkes County-distilled liquor. It was the way they said “thank you” in Wilkes County. 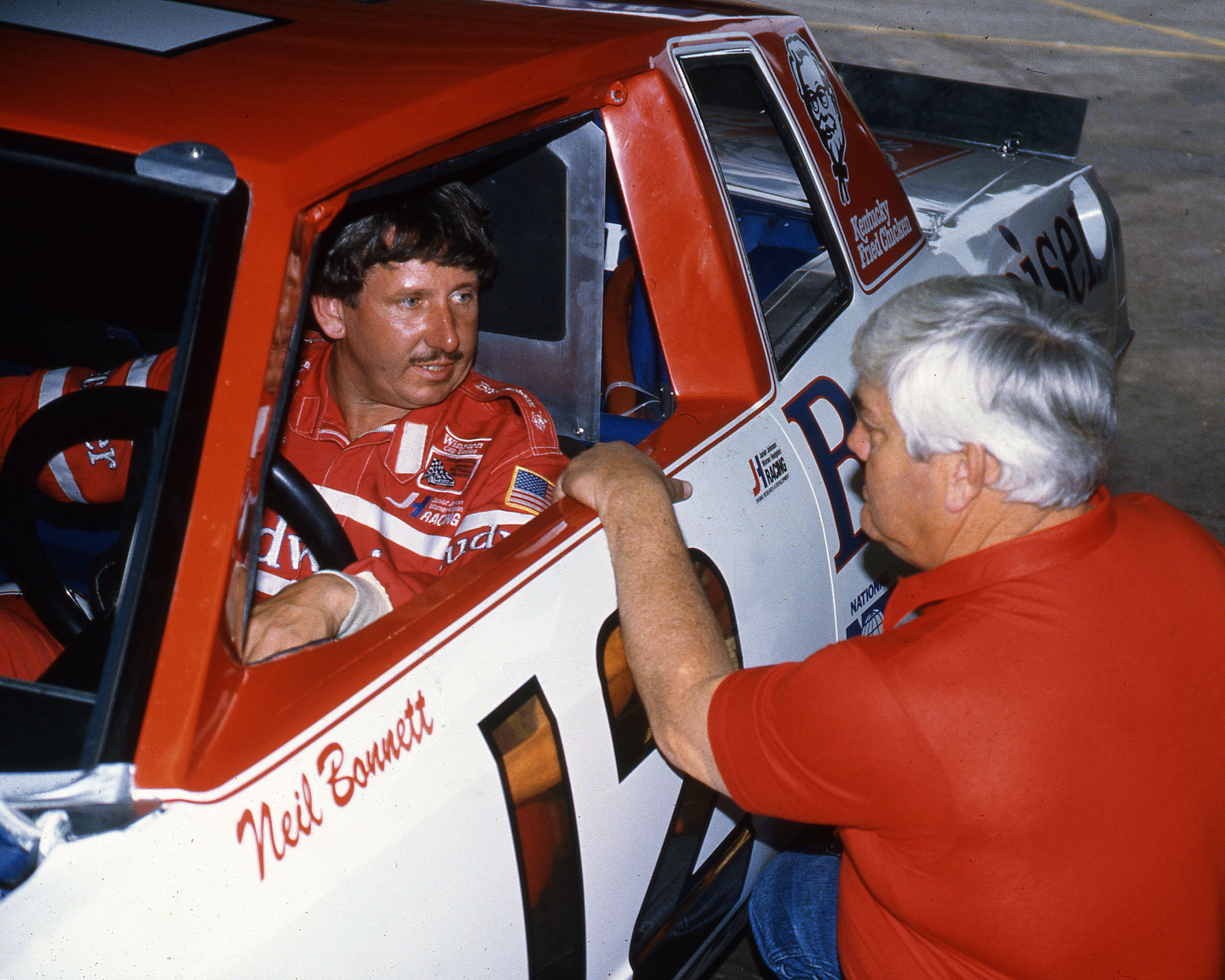 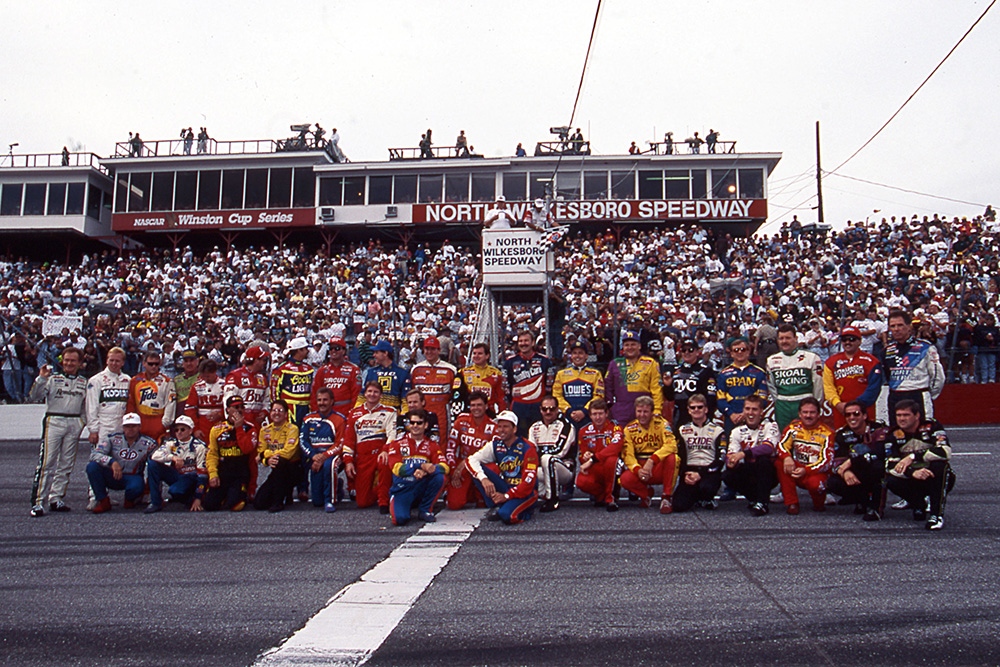