Since 1949, NASCAR has visited 55 tracks across the country where the premier series raced once and once only.

When the NASCAR Strictly Stock Series (now premier series) began competing in 1949, the schedule was a mere eight races. By 1951, the series had been rebranded as the NASCAR Grand National Division and the schedule was expanded to a much-more-ambitious 41 races.

In order to grow that dramatically, NASCAR and its founder, Hall of Famer William H.G. France (2010) had to find places to race and promoters willing to do the work to make those races successful. Some early partnerships paid huge dividends. For example, NASCAR has raced at Martinsville Speedway continuously since 1949 and Darlington Raceway since 1950.

But not every venue – especially early on – was a hit. Between 1950 and 1971, the premier series raced once and once only at 55 different tracks. Those tracks were spread all over North America, from Florida in the south, all the way up to Canada and New York state in the east and as far west as Washington state and California.

Here’s some trivia about tracks where the premier series raced just one time. 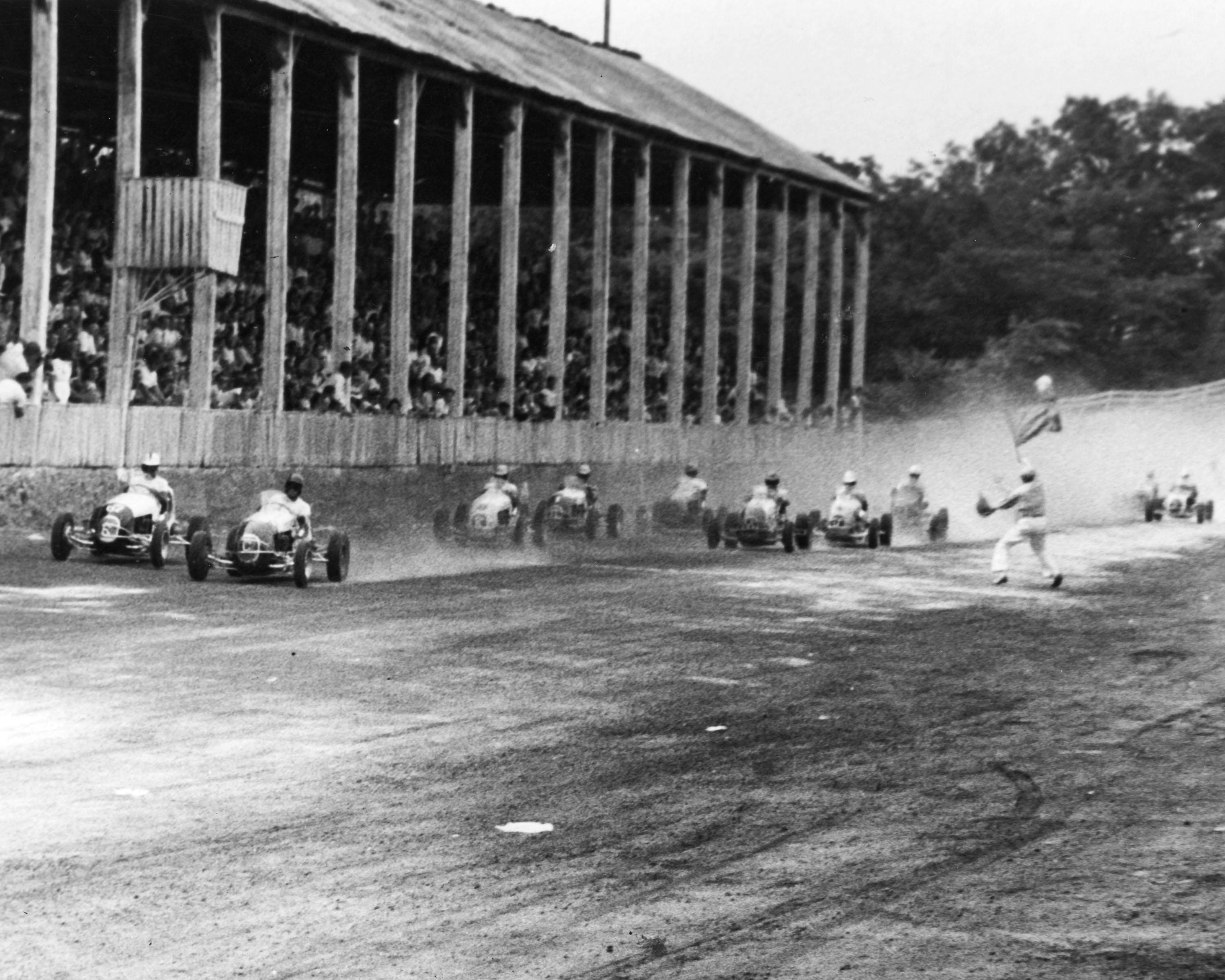 A field of open-wheel midgets competed at Winchester Speedway in 1948. Photo courtesy of NASCAR Archives & Research Center via Getty Images.

Opened in 1916, Winchester Speedway is a half-mile track about 90 miles northeast of Indianapolis. It’s still in use today and over the years has played host to a wide variety of racing series, including open-wheel cars and regional NASCAR series. The one and only premier series visit came on October 15, 1950, when Lloyd Moore won a 200-lap race behind the wheel of a 1950 Mercury owned by Julian Buesink, who was also the car owner for 1950 series champion Bill Rexford. First place at Winchester paid $1,000. 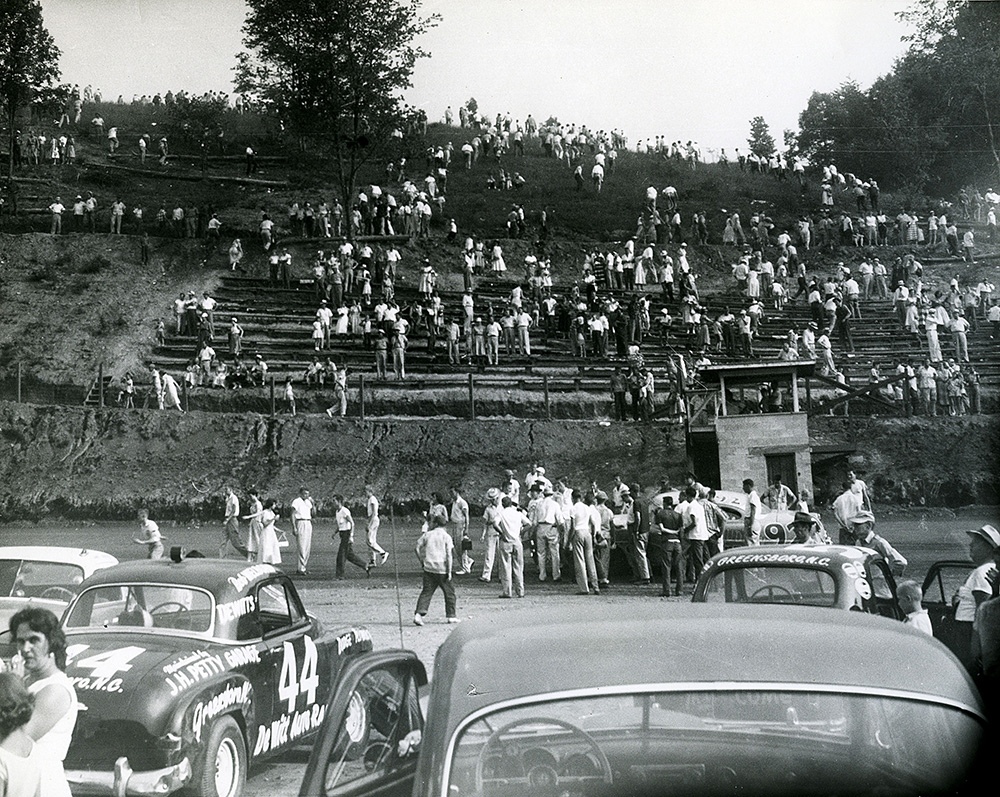 Of the 55 times NASCAR visited a track just once, the biggest winner was Hall of Famer Herb Thomas (2013), driver of the Fabulous Hudson Hornet. Thomas won nine of those 55 races, all on 0.500-mile dirt tracks. Those nine victories were earned in eight different states: North Carolina, Ohio, Florida, South Dakota, Iowa, Virginia, Pennsylvania and California. Eight of Thomas’s nine victories in these one-off races paid $1,000 each to win. The lone exception was at Merced (California) Fairgrounds in 1956, where winning paid a mere $910. At Merced, Thomas won driving one of Carl Kiekhaefer’s Chryslers; the other eight one-offs were all won in Thomas’ Hudson.

Two other Hall of Famers were big winners in these 55 races: Lee Petty (2011) and Tim Flock (2014) won six times each at the one-time-only race tracks. 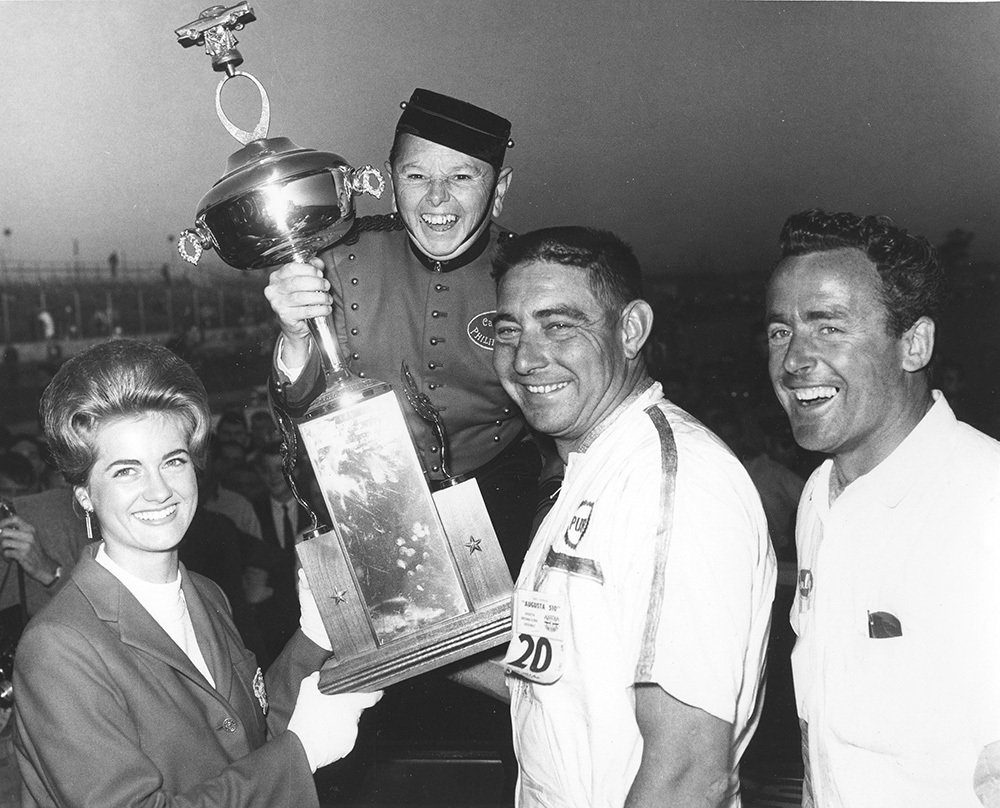 Fireball Roberts' last victory was one of the top-paying races of 1963. Photo courtesy of NASCAR Archives & Research Center via Getty Images.

Show Me the Money

Of the 55 tracks where the premier series raced only once, the average first-place payout was $1,250. Most races paid $1,000 to win in those days. Far and away the biggest payday at a one-and-done track came on November 17, 1963, when Hall of Famer Fireball Roberts (2014) earned $13,190 for capturing the First 510 on the 3.0-mile Augusta International Raceway road course in Georgia. Roberts’ victory, which came just five days before the assassination of President John F. Kennedy, was his 33rd and final triumph of his premier series career.

The smallest payout in the 55 races came on June 12, 1958, at New Bradford Speedway in Bradford, Pennsylvania. There, Hall of Famer Junior Johnson (2010) earned just $550 for winning. 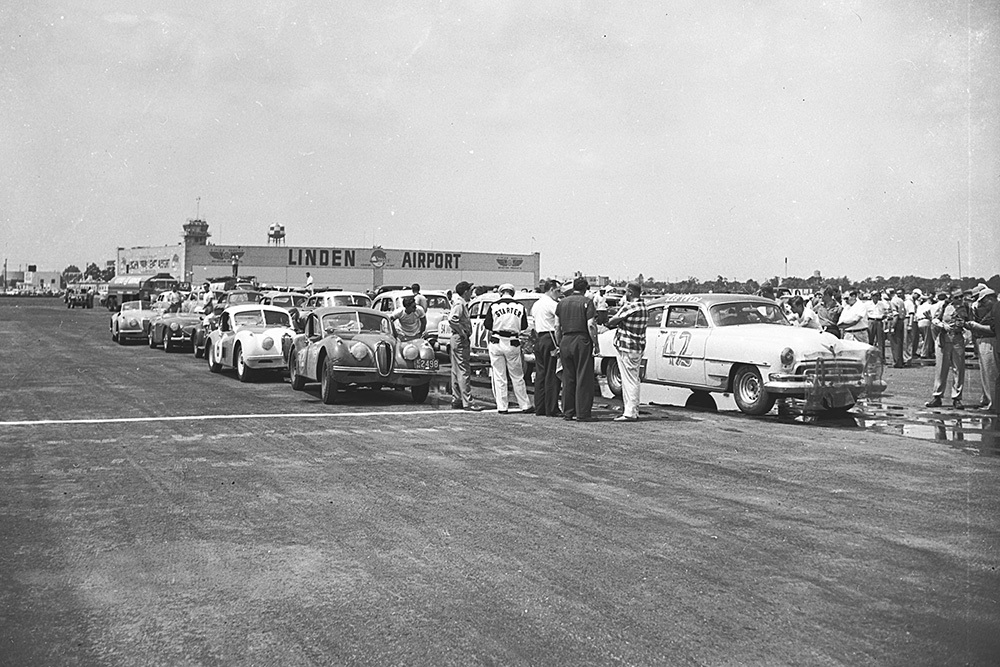 Al Keller was the only driver to win a premier series race in a Jaguar. Photo courtesy of NASCAR Archives & Research Center via Getty Images.

The oddest of these 55 races might have been the 1954 International 100, conducted on a 2.0-mile road course at New Jersey’s Linden Airport. As the name implies, the race had an international flavor, as it was opened up to include foreign cars. Al Keller scored one of his two career victories driving a Jaguar. In fact, Jaguars occupied four of the top six finishing spots. Other marques represented in the race included MG, Austin-Healey, Porsche, Morgan and Henry J, along with the usual assortment of Hudsons, Fords, Oldsmobiles and Plymouths. 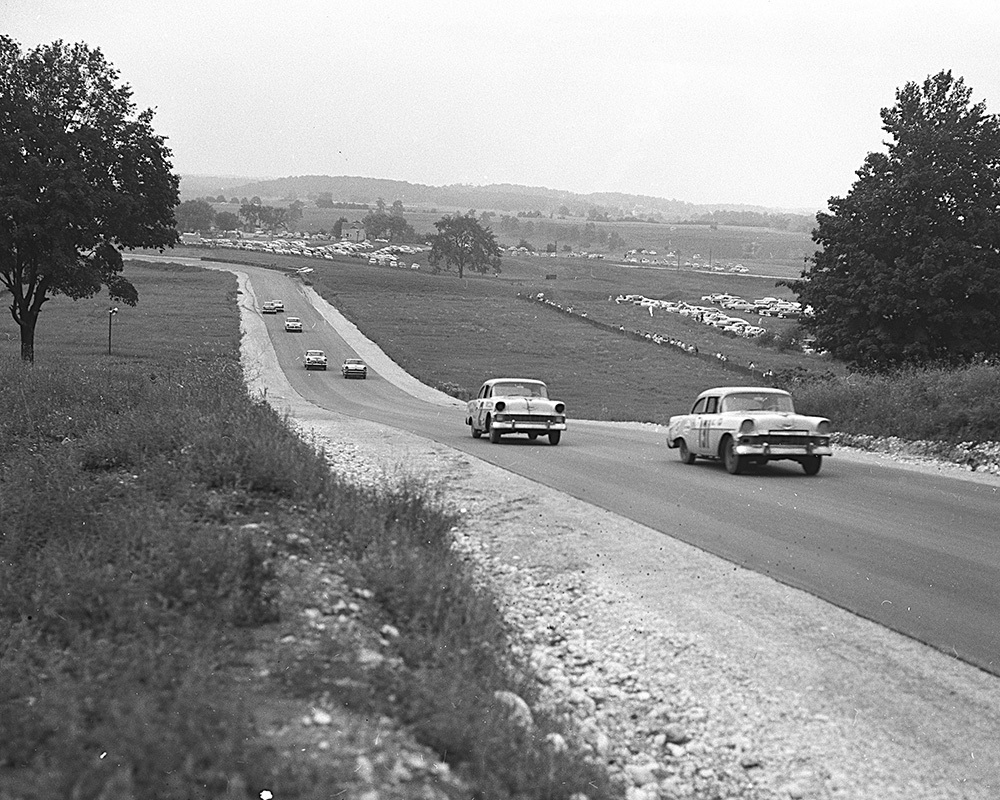 In addition to Al Keller’s victory at Linden Airport and Fireball Roberts’ Augusta win, there were three more road- course events among the 55 one-time races. In 1956, Hall of Famer Tim Flock (2014) scored his final career victory in the only premier series race ever run on the 4.1-mile Road America circuit in Elkhart Lake, Wisconsin. The NASCAR Xfinity Series has run annually at Road America since 2010. 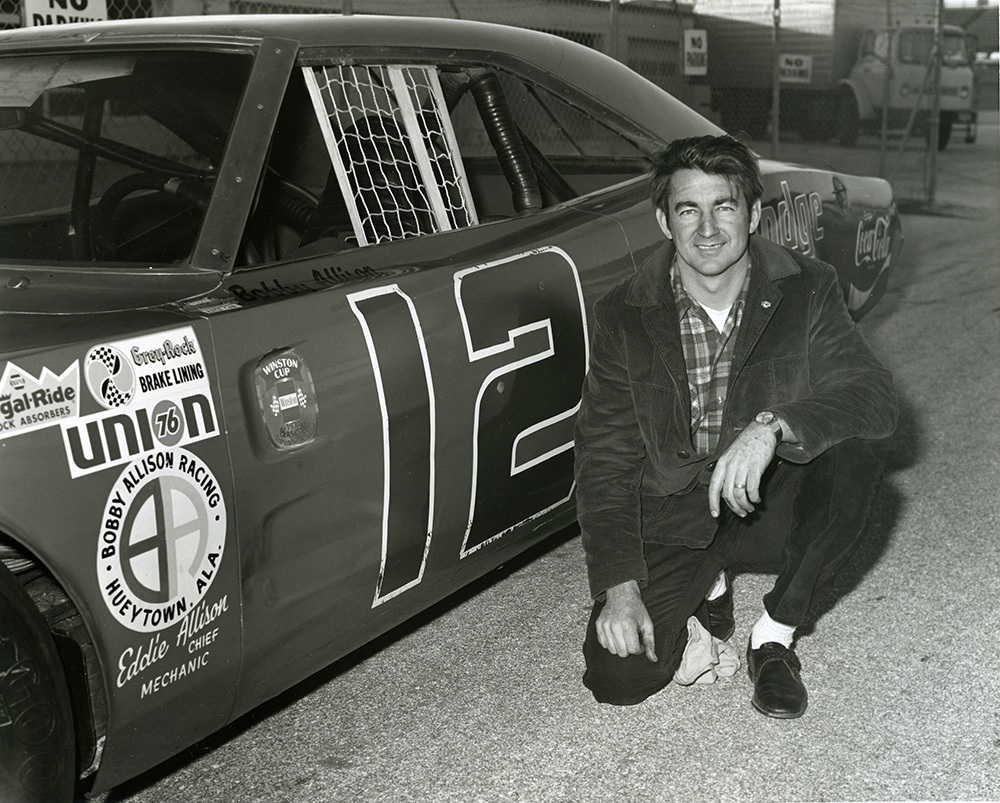 Last But Not Least

The final time that the NASCAR premier series raced for the first and last time at a new track came on June 21, 1971 at Meyer Speedway, a 0.500-mile paved track in Houston. Before an estimated crowd of 9,000, Hall of Famer Bobby Allison (2011) led 253 of 300 laps in his 1971 Dodge to claim the first-place prize of $2,200. The race was notable because it was Allison’s fifth consecutive race victory dating back to the World 600 at Charlotte Motor Speedway over Memorial Day weekend.