It took two attempts and a lot of preparation, but in 2001 Tony Stewart became the only driver in history to finish on the lead lap of the Indianapolis 500 and the Coca-Cola 600 on the same day. 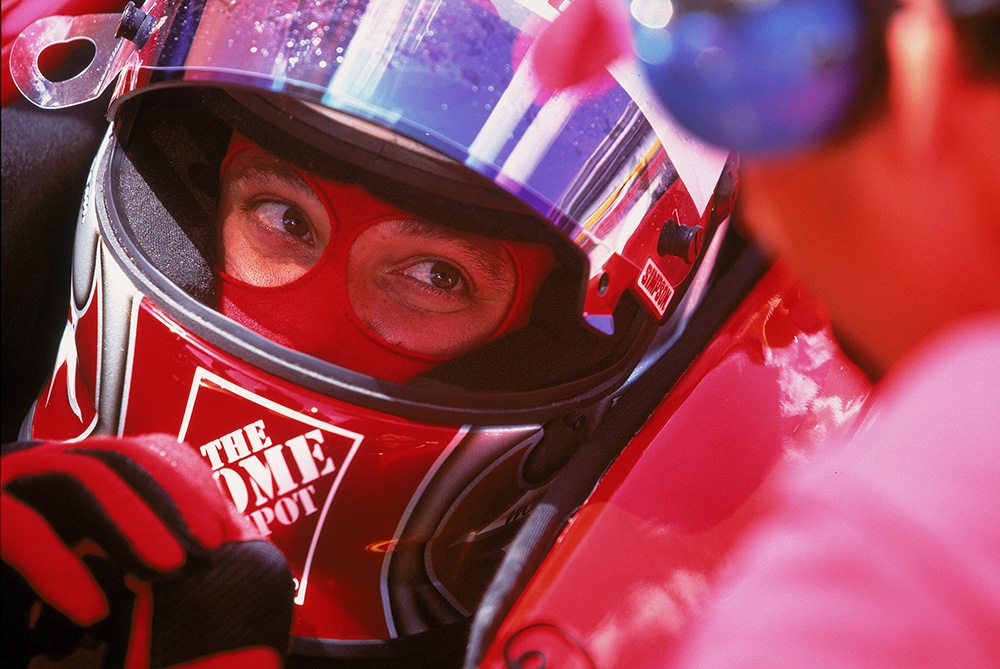 In a career filled with impressive feats, one of Tony Stewart’s finest accomplishments was completing the Indianapolis 500-Coca-Cola 600 double, a same-day, 1,100-mile marathon on Memorial Day weekend.

Stewart, a member of the NASCAR Hall of Fame Class of 2020, pulled double duty twice, the first time in 1999 and the second in 2001. In ’99, he finished ninth at the Indy 500, completing 196 of 200 laps driving for Tri-Star Motorsports. Driving a Pontiac for Hall of Fame team owner Joe Gibbs (2020), Stewart then finished fourth in his rookie appearance in the Coca-Cola 600, NASCAR’s longest race. That was impressive, but what the Indiana native did two years later verged on remarkable.

In 2001, Stewart piloted one of Chip Ganassi’s open-wheel cars to a sixth-place, lead-lap finish at Indianapolis, following that up with a third-place finish at Charlotte Motor Speedway behind the wheel of his familiar No. 20 Joe Gibbs Racing Pontiac. To this day, Stewart remains the only driver to finish on the lead lap of the Indy 500 and Coca-Cola 600 on the same day.

Stewart’s two helmets from his 2001 double-duty effort at Indy and Charlotte are in his artifact case as part of his Hall of Honor display in the NASCAR Hall of Fame. 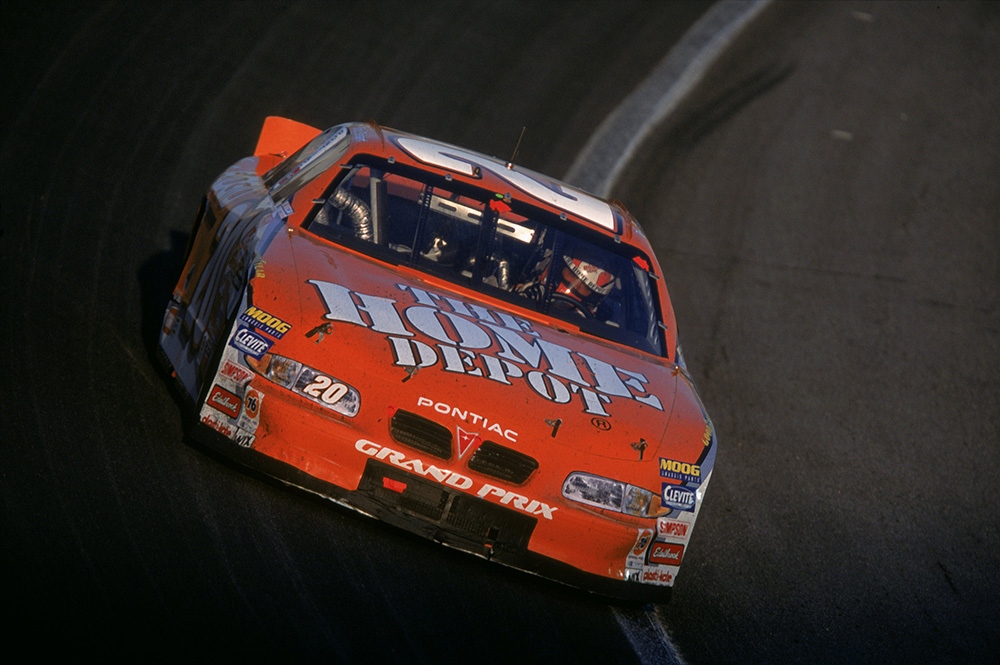 Tony Stewart completed his historic double with a third-place finish in the Coca-Cola 600 at Charlotte Motor Speedway. Photo courtesy of Craig James/Allsport

While Stewart’s double-duty accomplishments have withstood the test of time, he remembers them as being very different. In 1999, Stewart did not properly train for the Indy-Charlotte double duty and paid a steep price, physically.

“The first year it was terrible. It was a terrible experience,” Stewart said, laughing. “I had no idea what I needed to do, nutrition-wise. I’m not a workout guy. I’m not a nutrition guy. And I realized very, very quickly that day – I learned at the end of the 500, that I had a long day ahead of me still.”

The first year it was terrible. It was a terrible experience.

The 1999 Coca-Cola 600 occurred on a heat-thick Southern night and after the race, Stewart passed out in his car as he sat on pit road. Fortunately for Stewart, a fellow driver walked over and pulled him out of his car. That driver was named Dale Earnhardt (2010), and his act of kindness is something Stewart remembers vividly.

“He (Earnhardt) leaned in and he’s like, ‘Have you had enough yet?’ And I’m like, ‘Yeah. I’m exhausted.’ And he actually helped me get out,” said Stewart. “He didn’t let me live that down for a couple of weeks, but when a guy like that who understands the significance of what you were trying to do that day comes and checks on you right away, that means a lot. This was a guy that intimidates so many people, but he had that side of him that was compassionate. It was kind of like a father-son moment, where he’s proud of you for what you’re doing.” 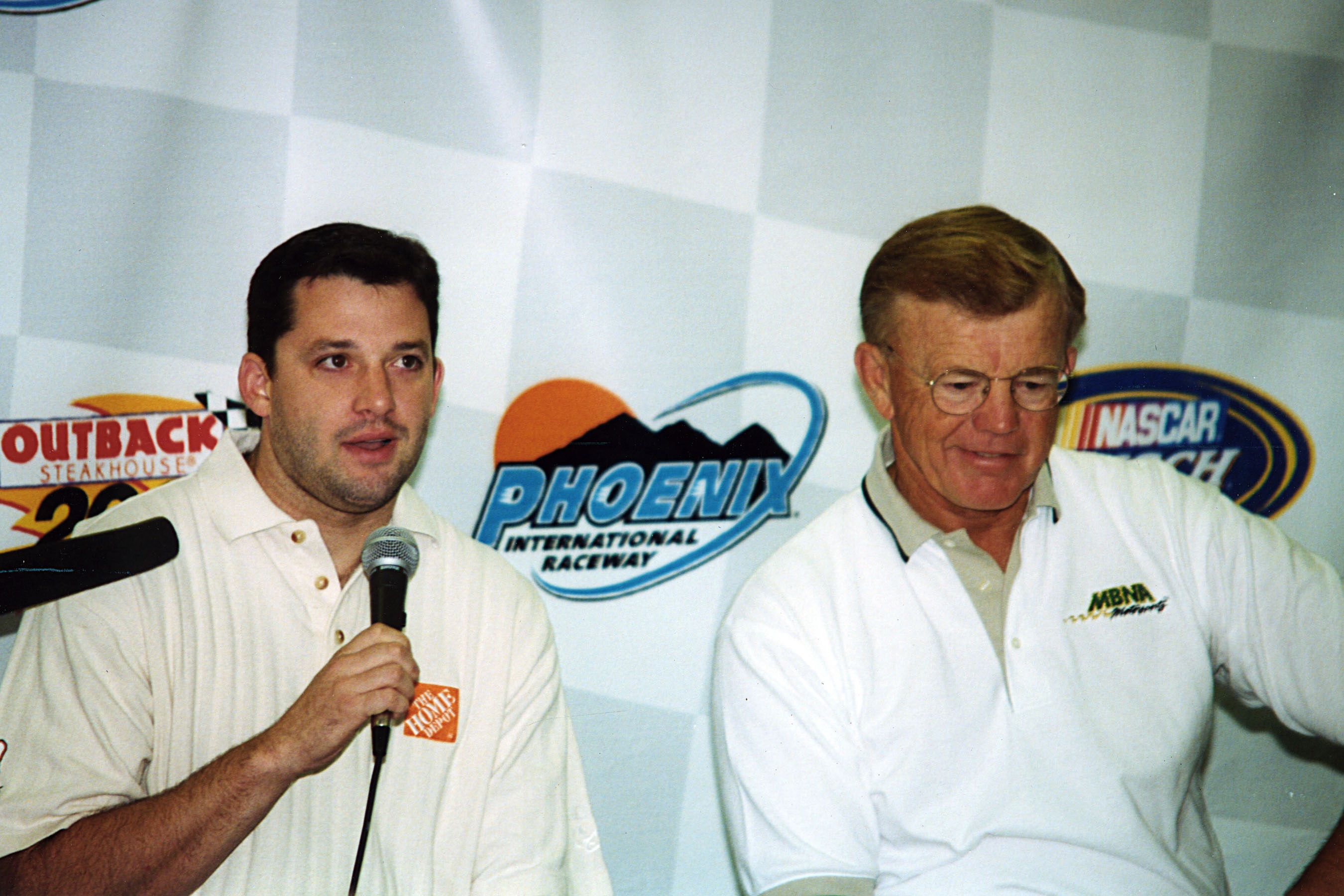 Tony Stewart (left) and his former team owner Joe Gibbs were both inducted into the NASCAR Hall of Fame Class of 2020. Photo courtesy of NASCAR Archives & Research Center via Getty Images

After going through a rough time at the double in 1999, Stewart came prepared in 2001. He didn’t have much choice, as his NASCAR team owner Joe Gibbs told Stewart he would have to do serious physical preparation the next time around.

The hard work paid off well for Stewart, who made history in 2001 with lead-lap runs in both races. “I finished sixth in the 500 and was leading when the rain came — had a legitimate shot to win that race, which is all you can ask for,” he says. “Then went to Charlotte, and to drive from the back and end up third.”

And the contrast between 1999 and 2001 was evident after Stewart left Charlotte Motor Speedway following his second double-duty run. “The first year in ’99, my girlfriend drove me home and every time she turned the corner or got on the gas or got on the brakes, I thought I was going to puke,” says Stewart. “And then the second time, two years later in 2001, she slept in the car while I drove us home that night. If I could have found a dirt race that I could have run and tagged the tail of the field, I would’ve run a 30-lap main event that night and been fine.”

The second year we did it in 2001, having a trainer with us for three-and-a-half weeks was a game changer.

Stewart would go to greater glory at Indianapolis Motor Speedway, winning the Brickyard 400 NASCAR premier series race in 2005 and ’07. On occasion Stewart talked about possibly coming back to the famous track and try to win the Indianapolis 500, but that door is now closed.

“People don’t understand why I say no,” says Stewart. “I respect the guys that are doing it. The guys that are running at Indy, the respect I have for them about how good they are at what they do and how technical everything is. The days of jumping in a car and just saying, ‘Hey, it’s tight. It’s loose,’ and they fix it, you go out there and you’re running up front. Those days are over. You don’t do that.”

More importantly, perhaps, the racer in Stewart wants to win every time he buckles himself into a race car.

“I don’t want to go to Indy and just make the race and be part of the race,” says Stewart. “I’ve been there, done that, got the shirt. I only want to do it if I feel like I’ve got a shot to win the race. And to do that, you’d have to run two, three years, probably to really be on your game at the level those guys are at. They have raised the bar so high that the days of jumping in a car and being competitive – that’s over.”