This recent Artifact donation highlights a 1952 program from Morristown Raceway. 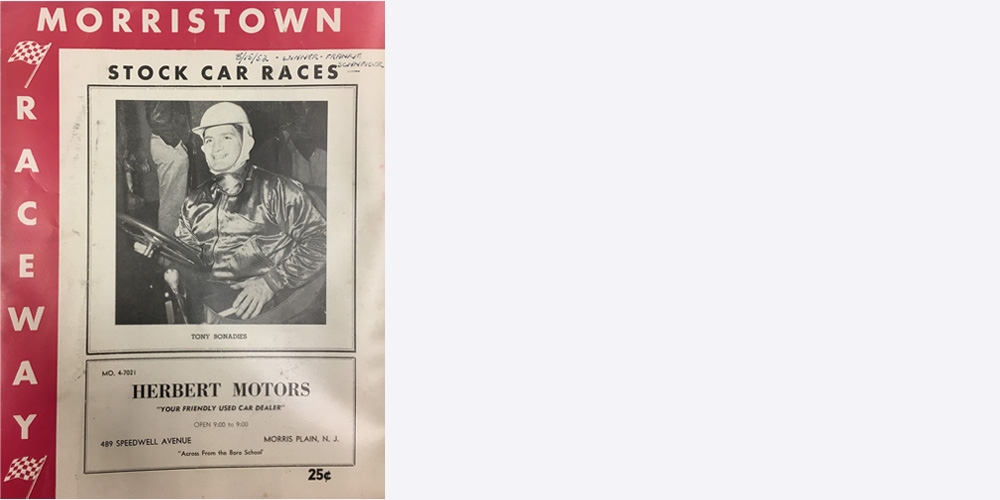 Dating back to its inception in 1948, NASCAR sanctioned countless events at small tracks scattered throughout the Northeast. This program is from Morristown (New Jersey) Raceway, which hosted NASCAR-sanctioned modified races throughout the summer in the first half of the 1950s. It became a hotbed for local and regional racers, such as Tony Bonadies (on the cover), who found success in various types of racecars throughout his career before losing his life in a crash during a race at Williams Grove (PA) Speedway in 1964. Joe Soranno, a local florist, founded and owned the ½-mile dirt track, and William H. G. “Big Bill” France (2010) worked closely with enthusiasts and supporters such as Soranno to bolster NASCAR’s popularity outside of the Southeast. In fact, five NASCAR premier series races were held at Morristown from 1951-1955. Located roughly 30 miles west of New York City, Morristown parallels the story of many short tracks during NASCAR’s early years. It was popular for a short period of time and then succumbed to residential and commercial development. Three ice arenas now occupy the site of the former Morristown Raceway.

The NASCAR Hall of Fame possesses a large holding of newer programs representing the sport’s most famous tracks and biggest races. This Morristown Raceway program, however, represents an important addition to the Hall’s small, yet growing, collection of programs from local fairgrounds and sometimes forgotten speedways.

Frankie Schneider prevailed in the feature on August 15, 1952; he would go on to become the 1952 NASCAR Modified Division champion. Nicknamed “The Old Master,” Schneider, for a time, was NASCAR’s oldest living champion of a national series. He passed away on November 12, 2018, near his hometown of Lambertville, New Jersey.