In just 21 years, there’s already been plenty of dramatic NASCAR history made at Homestead-Miami Speedway. 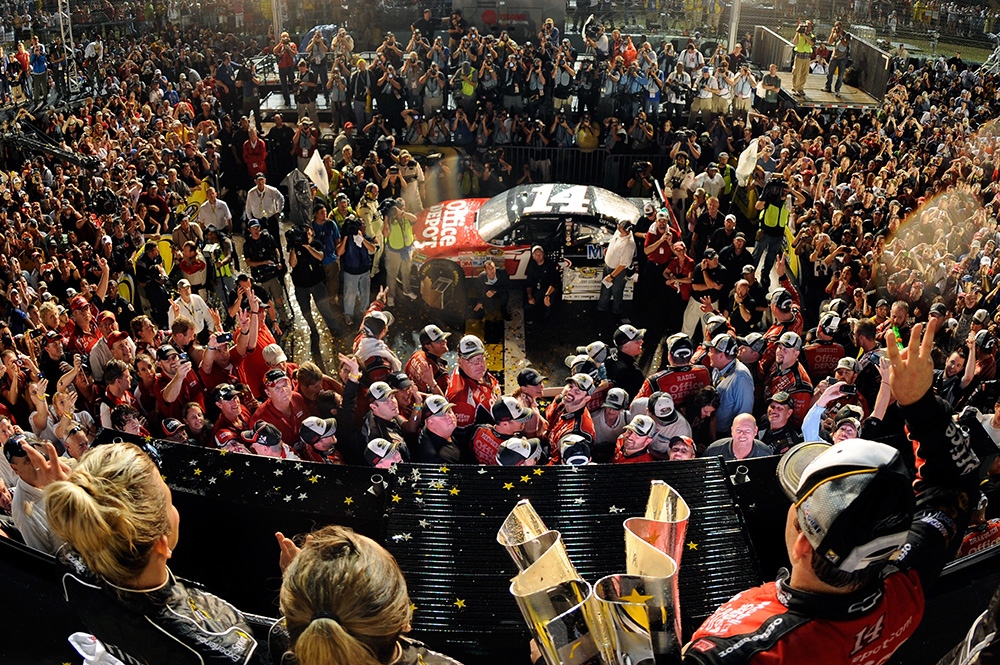 Even though Homestead-Miami Speedway is one of the youngest tracks in NASCAR, it’s played a crucial role in determining premier series champions in recent years.

Seven times in its first 21 seasons on the NASCAR schedule, the winner of the Homestead race also won the season championship. Of course, Homestead’s race dates have helped in that department: For the past 18 seasons, Homestead has been the final race on the schedule each year, and in 2014, NASCAR introduced a winner-take-all format that pretty much guaranteed the Homestead victor would be that season’s premier series champion.

That in no way diminishes the drama that Homestead has produced over the years. The 1.5-mile South Florida oval has seen some tremendous battles and likely will see another one on June 14, when the track hosts the Dixie 400, the 12th of 36 points races on this year’s Cup schedule.

Here are five Hall of Fame moments from Homestead-Miami Speedway: 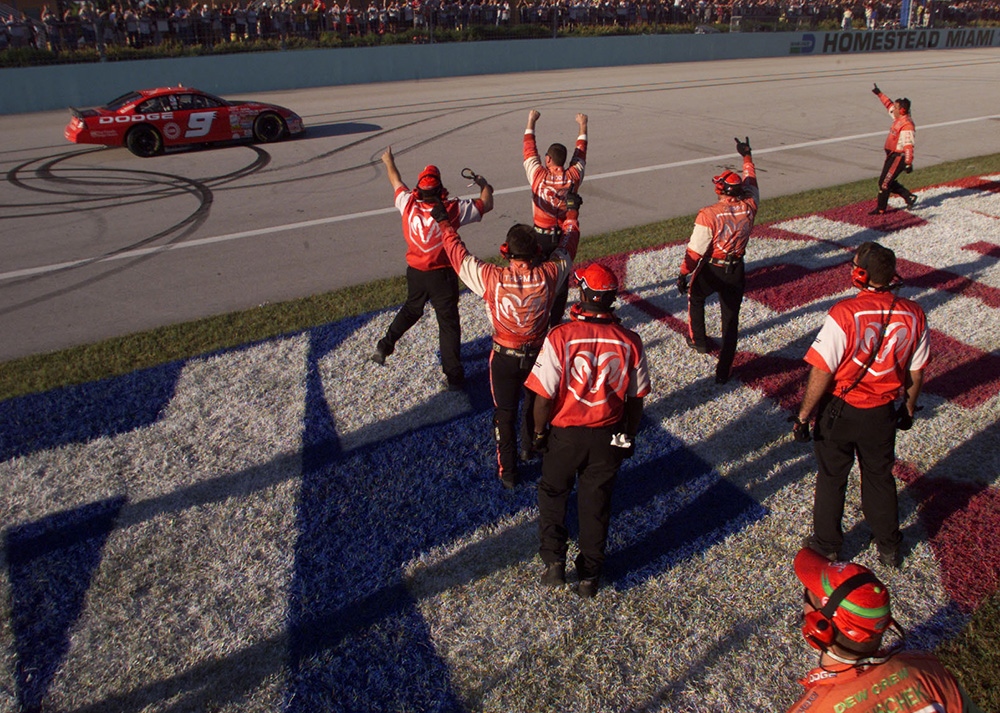 The crew at Evernham Motorsports saluted Bill Elliott as he did a celebratory burnout after his 2001 victory at Homestead-Miami Speedway. Photo courtesy of NASCAR Archives & Research Center via Getty Images.

In late 1999, Hall of Fame crew chief Ray Evernham (2018) took what many would consider the biggest gamble of his career. Having already won three premier series championships with driver Jeff Gordon (2019) and team owner Rick Hendrick (2017), Evernham walked away from a secure position with Hendrick Motorsports, one of NASCAR’s elite teams to chase an even bigger dream: Bring Dodge back to NASCAR after a 16-year absence. That meant building a new team, a new race car and a new engine, all from scratch and all in time for the 2001 season.

To help in the development of his new car, Evernham hired Hall of Famer Bill Elliott (2015) as one of his two drivers, the other being young Casey Atwood. Although the two had some good runs during the season – including a Daytona 500 pole for Elliott in the first race for Evernham Motorsports – it wasn’t until the final race of 2001 that the team struck gold. In the season-ending Pennzoil Freedom 400 at Homestead-Miami Speedway, Elliott and Atwood qualified 1-2, with Elliott passing Atwood with five laps to go to earn his 41st career win.

Not only was the win big for Dodge and Evernham, but it was also Elliott’s first victory since the 1994 Southern 500 at Darlington Raceway. Asked if he ever doubted whether he’d win again, Elliott was resolute. “With Ray and these guys behind me, no,” he said. “… These guys stood behind me through thick and thin.” 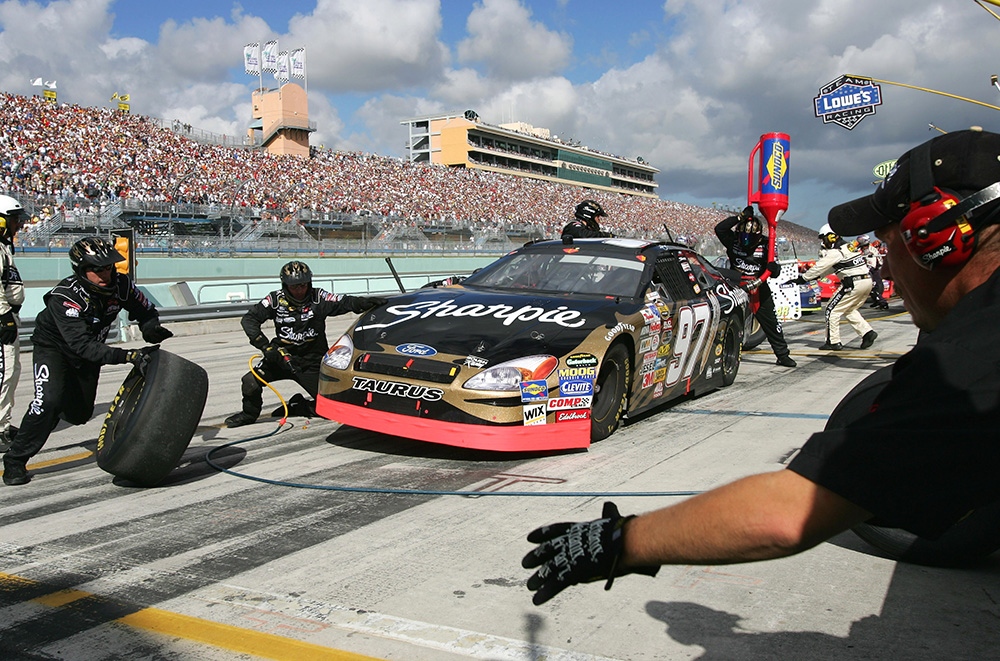 It’s safe to say that no one knew what to expect when NASCAR took the unprecedented step of creating a playoff system in 2004. From 1949 to 2003, the championship formula was simple: Whichever driver ended the full season with the most points was the champion. That all changed in 2004, when NASCAR began what then was called the Chase for the Nextel Cup. At the conclusion of the 26-race regular season, the top 10 drivers in points would race for the title over the final 10 races of the year.

Kurt Busch, who drove for Hall of Fame team owner Jack Roush (2019), won the first Chase race of 2004, gaining a points lead he would carry into the final race of the season at Homestead-Miami Speedway. Meanwhile, after stumbling early in the Chase, Jimmie Johnson won four times in five weeks to pull within 18 points of Busch as the teams got ready for the final race of the season.

And what a race it was. Busch lost a right-front wheel on the 93rd of 267 laps, miraculously missing hitting the outside pit wall by less than a foot, somehow staying on the lead lap and rebounding from 28th place to finish fifth. Johnson ended up runner-up in the race to Greg Biffle (Busch’s teammate) and second in points as Busch took the title by eight points over Johnson and 16 points over four-time champion and Hall of Famer Jeff Gordon (2019). “I'm overwhelmed,” said Busch after the race. “I'm completely exhausted about what these final 10 races meant. But it's a true testament to what a team has to do, to what a driver has to do, to what an owner sees as a leader, in the way you have to compete at your top level for 10 races against the 10 toughest competitors.” 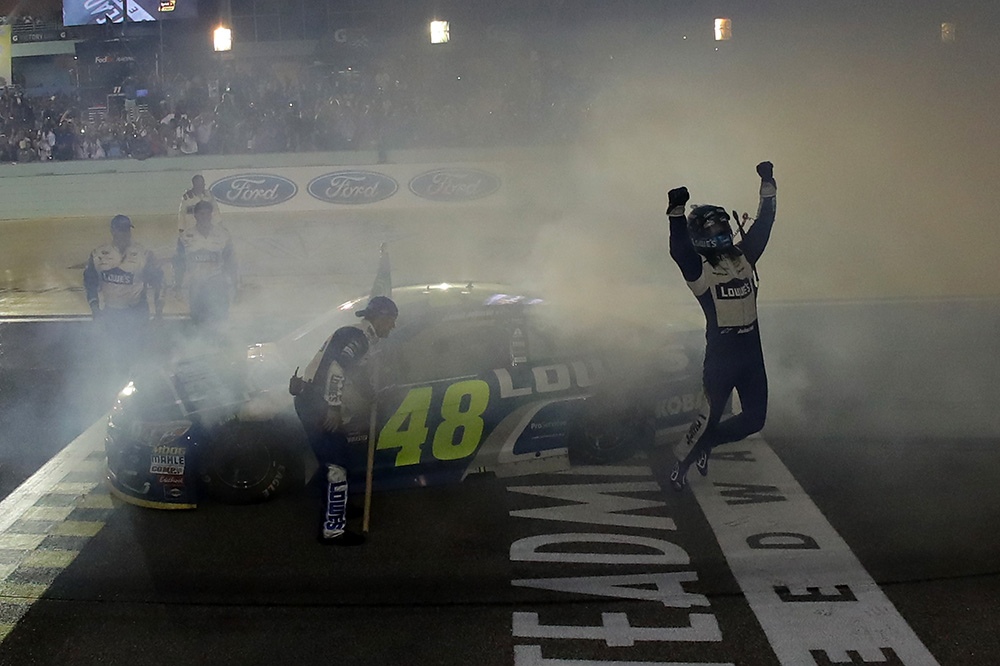 NASCAR might never see another championship run like the one Jimmie Johnson pulled off when he won a record-tying seven premier series titles in just 11 seasons, including a phenomenal five consecutive crowns from 2006-10. That mark alone set Johnson apart from any other driver since only Hall of Famer Cale Yarborough (2012) has won as many as three consecutive championships.

Johnson’s most recent championship in 2016 may have been his most unlikely, as he didn’t enter the season-ending Ford EcoBoost 400 at Homestead-Miami Speedway as the pre-race favorite. On top of that, he didn’t have the fastest car in the race among the four championship hopefuls, which included Carl Edwards, Joey Logano and Kyle Busch. Edwards appeared headed for the victory until a late-race caution on Lap 253 of 268—due to a car spun on the backstretch. Edwards led on the restart, but as the field headed towards Turn 1, Logano made a bold move underneath him. Edwards tried to block the onrushing Logano, but the two made contact with Edwards getting shoved into the wall and out of the race.

That handed the lead to Kyle Larson, but after another yellow, Johnson timed the restart perfectly and went to the front for the first time all race long. Johnson led only the final three laps, but they were enough to earn him his seventh premier series title, tying him with 2010 Hall of Fame inductees Richard Petty and Dale Earnhardt and giving Hall of Fame team owner Rick Hendrick (2017) his record 12th title. “There was just something really interesting and different about my calmness and the relaxed nature that I had in the car,” said Johnson. “I didn't know what the outcome would be, but I was very content and peaceful with whatever was coming my way, and then it ended up being the greatest thing in the world. So it's just wild.”

"I didn't know what the outcome would be, but I was very content and peaceful with whatever was coming my way, and then it ended up being the greatest thing in the world." 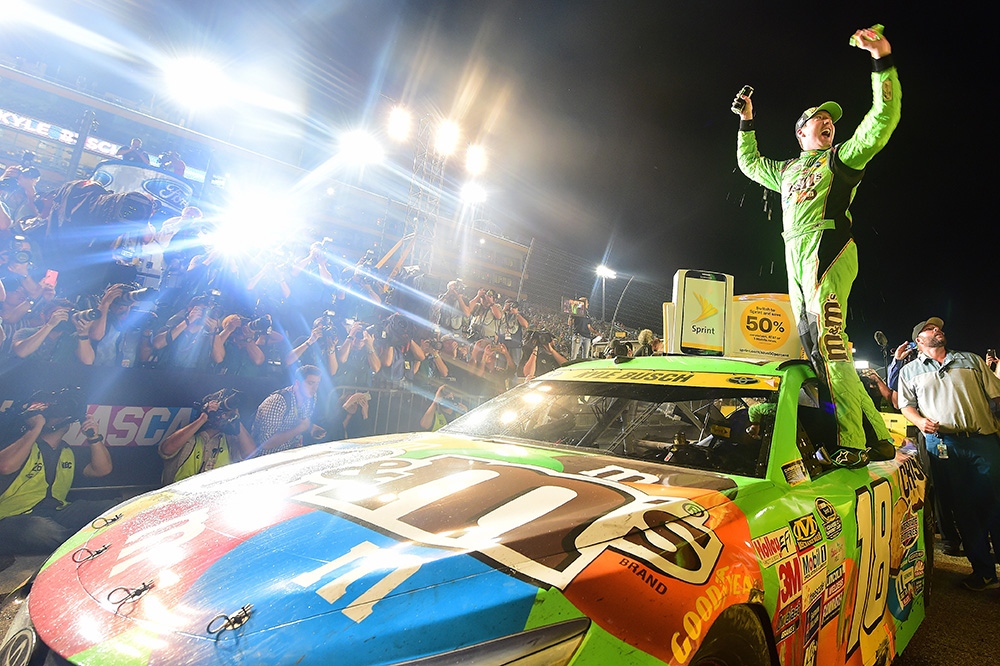 After the first weekend of NASCAR racing in 2015, it literally seemed impossible that Kyle Busch could win his first premier series championship. In the season-opening NASCAR Xfinity Series race at Daytona International Speedway, Busch had a horrifying high-speed crash, going head-on into a concrete infield wall. In the collision, Busch broke his right leg and left foot, which forced him to miss the first 11 races of the premier series schedule. Ordinarily, that would have made Busch ineligible for championship contention, but NASCAR granted him a medical waiver, which allowed him to compete for a title after he came back; he won four regular-season races and placed in the top 30 in points.

As a result, Busch rolled into the season-ending Ford EcoBoost 400 at Homestead-Miami Speedway as one of four drivers in title contention, the others being defending series champion Kevin Harvick, Martin Truex Jr. and Hall of Famer Jeff Gordon (2019). Over the final 106 laps of the 267-lap race, Busch and Brad Keselowski traded the lead back and forth six times, with Busch making the race-winning pass on Keselowski after a restart with seven laps to go. With the win, Busch became the third driver to claim a premier series championship for Hall of fame team owner Joe Gibbs (2020).

“So far it feels amazing,” Busch said after the race. “You know, I don't know that anybody could have ever dreamt of this year especially, but to have dreamt of my career path the way it's kind of gone, it's certainly amazing to have the opportunity right now to be in this position with Joe Gibbs and M&M's and Toyota and (crew chief) Adam Stevens.” 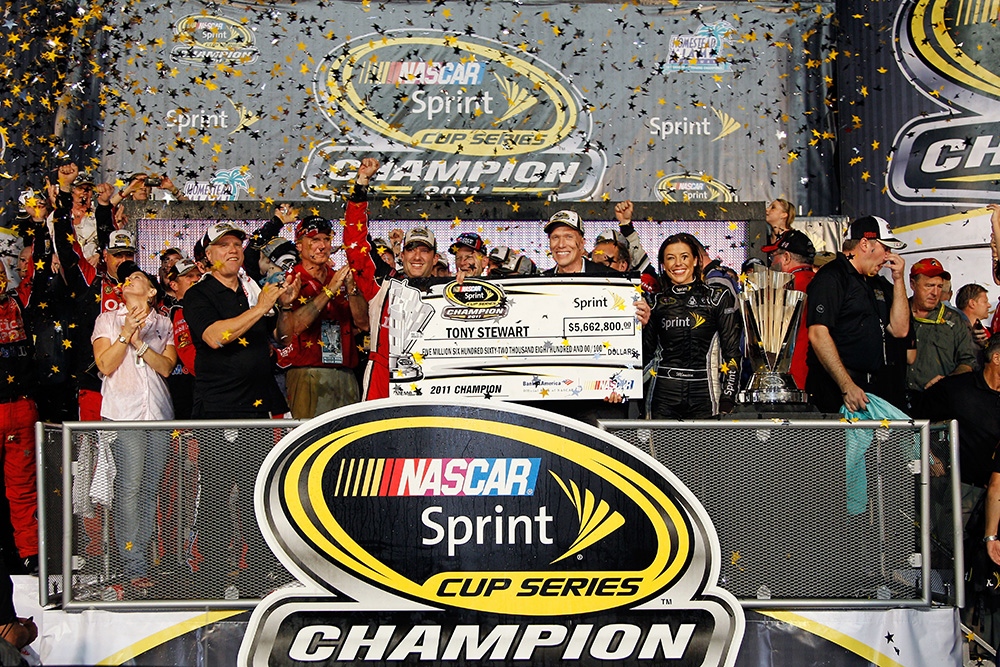 In winning his third championship, Tony Stewart had to make 118 passes on track in the season finale at Homestead-Miami Speedway. Photo courtesy of NASCAR Archives & Research Center via Getty Images.

In 2011, Hall of Famer Tony Stewart (2020) put on an epic performance in the NASCAR playoffs that has never been equaled, let alone surpassed. After going winless in the 26-race premier series regular season, Stewart won four of the first nine playoff races to put himself in position for a third championship. But first he had to beat points leader Carl Edwards in the season-ending Ford 400 at Homestead-Miami Speedway.

In that race, a series of maladies including a hole in the front end of his car caused by a u-joint that fell off another car, contact with another driver and a bad pit stop sent Stewart clear to the rear of the field three times. But each time he was able to quickly work his way back to the front, making a total of 118 passes on the night. By winning the race, Stewart tied Edwards in points, taking the NASCAR championship on a tiebreaker for most series victories on the season.

“I don’t know how you would ever top – at least for my career – the championship run and the championship race in 2011 at Homestead,” said Stewart. “There were so many things that happened that night, with the damage from the u-joint at the beginning of the race to getting that repaired and patched up and getting halfway up through the field and running into David Reutimann. Having to come back in and fix it and getting back up there. The rain delay, getting going, a bad pit stop, a rain delay again. There were just so many things. … If you took all of those individually, that’s enough drama for one race, let alone having all five of those in one race to decide a championship.”