At the NASCAR Hall of Fame, we said goodbye to Ricky Craven’s iconic Tide-sponsored 2003 Pontiac and added another great race car to one of our signature exhibits.

There’s been a significant change at the NASCAR Hall of Fame.

The very first artifact ever loaned to the Hall, a 2003 Pontiac that Ricky Craven drove to victory in the closest finish in NASCAR history, has been returned to its owner.

Craven and his Tide-sponsored Pontiac won the 2003 Carolina Dodge Dealers 400, crossing the Darlington Raceway start-finish line a mere 0.002 seconds ahead of Kurt Busch’s Ford, which was fielded by Hall of Famer Jack Roush (2019). In the closing laps, Craven and Busch put on an incredible show, banging fenders and trading paint as they raced to the checkered flag.

The bright orange Pontiac Craven so graciously loaned us was the centerpiece of the Hall’s Greatest Finishes exhibit for nearly 11 years. 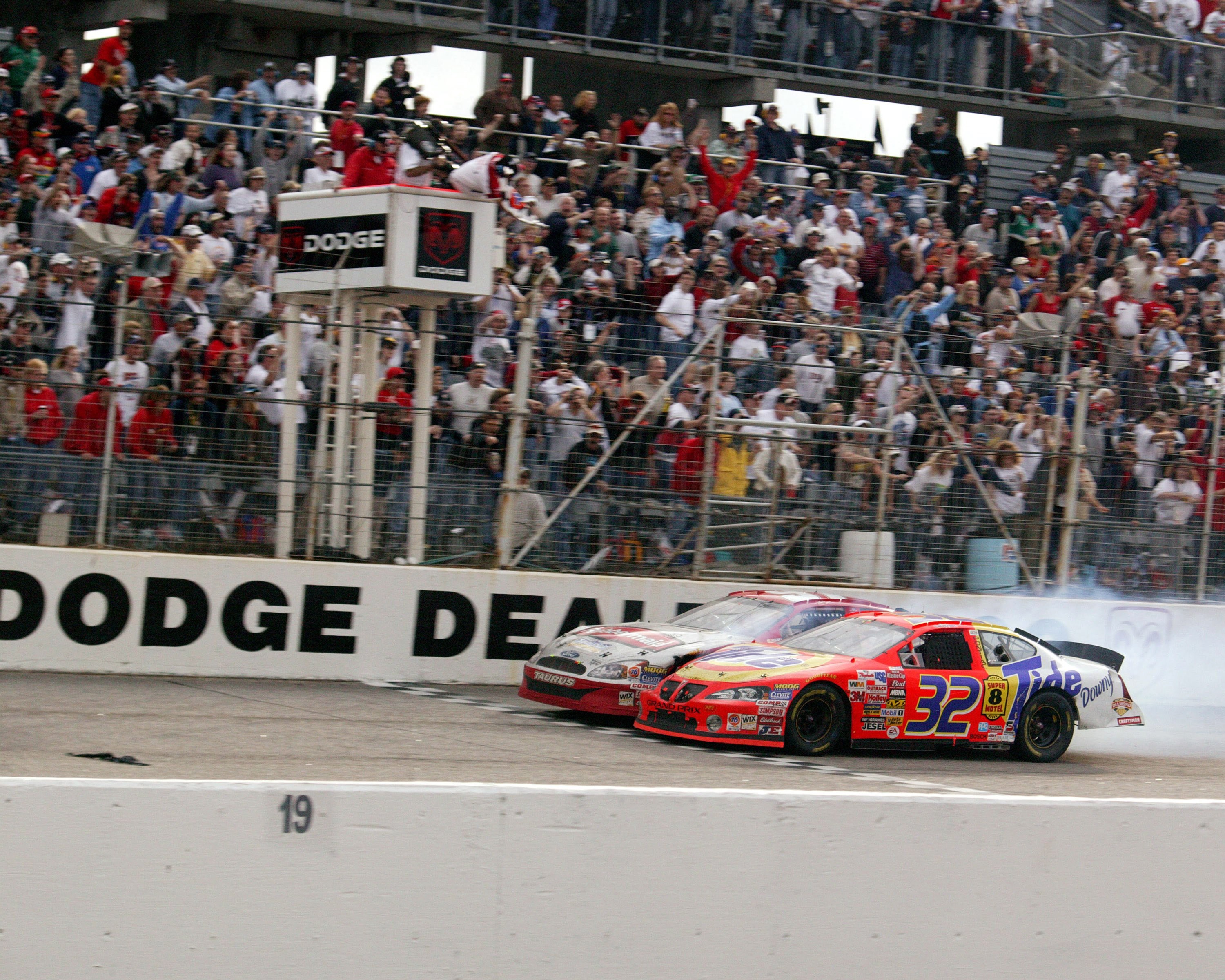 Ricky Craven (No. 32) electrified the Darlington crowd in the 2003 Carolina Dodge Dealers 400, when he beat Kurt Busch by just 0.002 seconds in what at the time was the closest finish in NASCAR history. Photo courtesy of NASCAR Archives & Research Center/CQ-Roll Call Group via Getty Images

But the story of how the car wound up in the Hall dates back 3 ½ years before the building ever opened.

In October 2006, Craven and the Hall’s Executive Director Winston Kelley ran into each other at a shareholder meeting at Duke Energy Corp, where Kelley formerly worked. “I had no knowledge of Winston being there,” said Craven. “In fact, he was the only person present that I knew.”

Call it fate, call it meant to be, but Craven and Kelley quickly struck up a conversation. “I don’t believe in coincidences,” Craven said. “We sat together and just somehow created this opportunity. I said, ‘I’ve got an automobile that might be of interest to you. … It’s got a lot of value to me, but I’d like to share it with the world.’”

That quickly got Kelley’s attention.

I’ve got an automobile that might be of interest to you. It’s got a lot of value to me, but I’d like to share it with the world.

“When he told me what it was, I immediately knew the significance of the car, as the closest finish at that time and still tied for the closest finish in the premier series at 0.002 seconds,” Kelley said. “And I said, ‘Hold that thought. I feel confident that we’ll have a use for your car, just not 100 percent sure what it is standing here today.’”

Keep in mind the Hall was still in the design phase at the time, which gave Kelley and his staff plenty of time to work with museum design firm Ralph Applebaum Associates to plan the space and expand the area that ultimately became the Greatest Finishes exhibit.

Getting Craven’s car was a true win-win for the museum and the driver.

For Craven, having his car on display at the Hall of Fame helped race fans to continually relive the drama of the victory.

“I just love the way people have been able to celebrate that race,” Craven said of his Darlington victory. “It’s not that they were fans of me, necessarily, or fans of Kurt. But they are fans of auto racing. And no matter where I go, even to this day, when people recognize me, typically the first topic of discussion is that Darlington finish in 2003."

Craven said having his Pontiac in the NASCAR Hall of Fame was a great experience, one that helped build relationships.

“I’d be remiss if I didn’t acknowledge Winston Kelley, who has been a lifelong friend,” said Craven. “I have the same regard for Winston that I do for the Petty family and the Wood Brothers family. They all welcomed me when I moved here in the early 90s. For Winston and his team – all of you – to preserve this car for a dozen years, I can’t even express my gratitude, because that car is part of my family.”

“Ricky and I had been friends,” said Kelley. “But we’ve become even closer friends. … Ricky is one of the most cerebral people in this sport and one of the best analysts. And I just enjoy talking to him about life in general and business and things like that.”

While we will certainly miss the Pontiac, the Hall of Fame is extremely grateful for the generosity and friendship of Craven, who enjoyed considerable success as both a racer and later a NASCAR television analyst.

I have the same regard for Winston [Kelley] that I do for the Petty family and the Wood Brothers family.

And don’t worry race fans: We have a more-than-worthy successor to Craven’s Pontiac. The new car is a 2003 Roush Fenway Racing Ford Taurus driven by and now owned by 2003 premier series champion Matt Kenseth (2023), who graciously agreed to loan it to us.

Bearing chassis number MMR 25, Kenseth’s car has a brief but compelling racing history. It competed in just three premier series races, all at North Carolina Speedway in Rockingham. In February 2003, Kenseth drove his No. 17 Ford to a third-place finish behind Hall of Famer Dale Jarrett (2014) and Kurt Busch.

In the penultimate race of the 2003 season, Kenseth wound up fourth in the Pop-Secret Microwave 400, behind Bill Elliott (2015), Jimmie Johnson and Jeremy Mayfield. Kenseth’s fourth-place finish was enough to clinch the premier series championship, his first title and the first for team owner Roush. 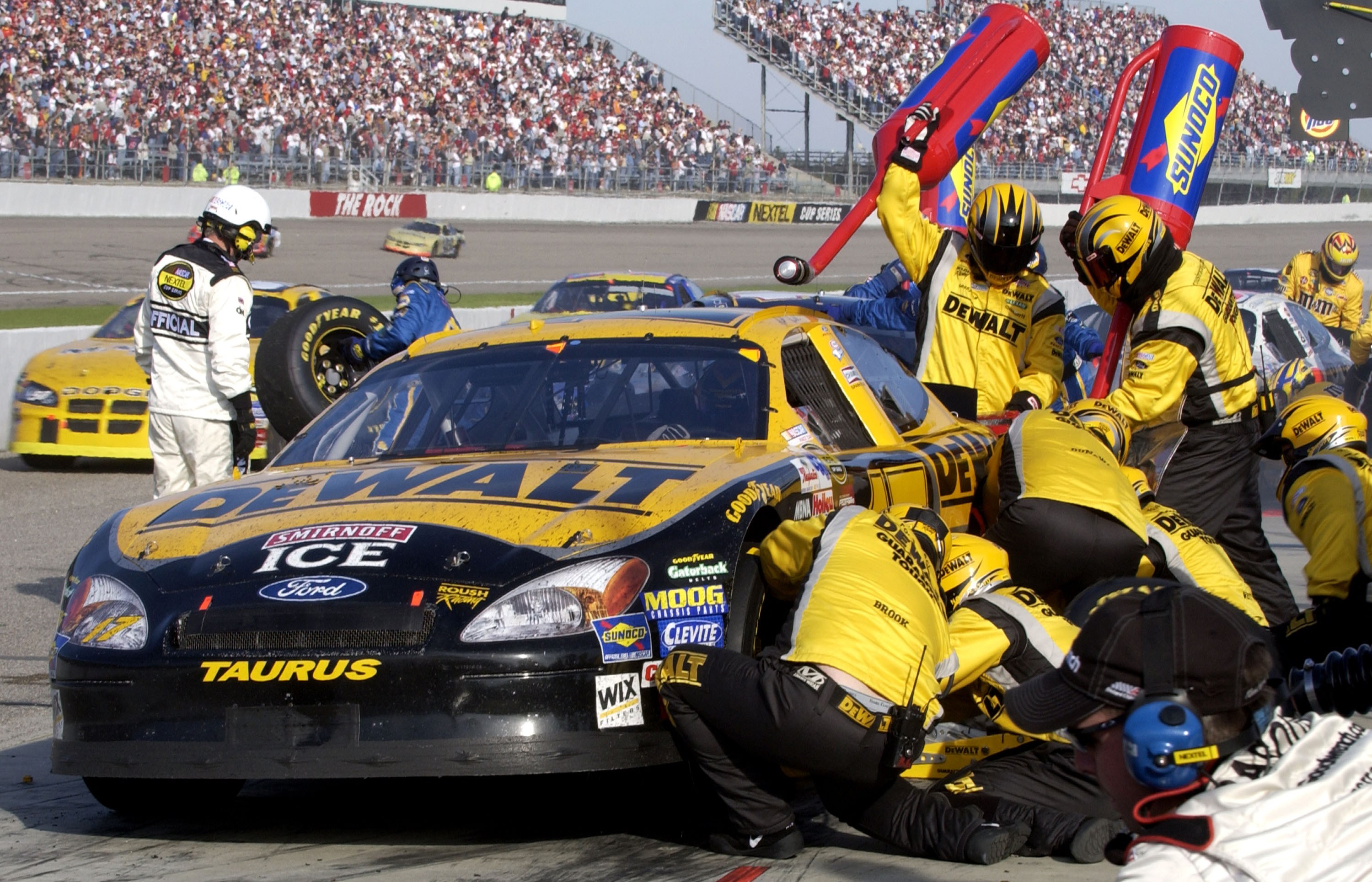 Last but certainly not least is the race that earned this car a spot in the Greatest Finishes exhibit in the first place, the 2004 Subway 400. In that race, Kenseth held off a furious late charge by Kasey Kahne in one of Ray Evernham’s (2018) Dodges to win by a mere 0.010 seconds. As it turned out, that was the final premier series race ever run at “The Rock.”

In summation Kenseth’s car had one victory and three finishes of fourth or better in its only three appearances and was the chassis he used to clinch his championship and win the last premier series race at the track in a near-photo finish. Those are some serious bonafides.

Not only did Ricky Craven and Matt Kenseth deliver a couple of NASCAR’s Greatest Finishes, they were both tremendous racers and remain great friends of the sport and of the NASCAR Hall of Fame. We thank them for lending us their cars so that we can create memorable experiences for our guests.