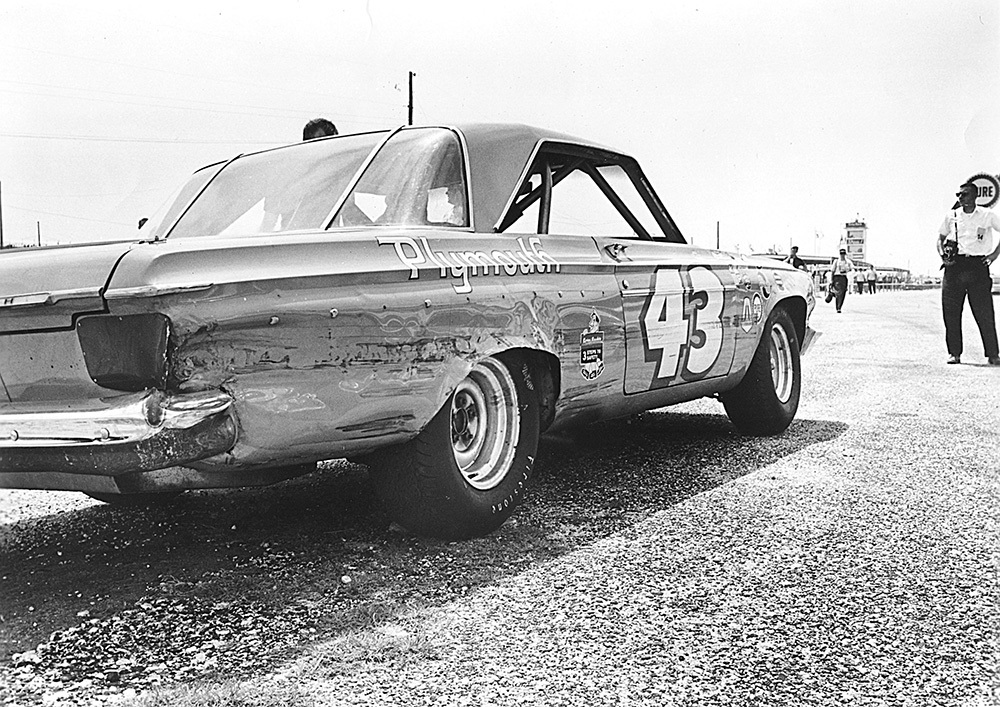 Darlington Raceway has always left its mark on NASCAR drivers – and on their fenders, too. Photo courtesy of NASCAR Archives & Research Center via Getty Images.

The “Lady in Black” is back.

The 2020 NASCAR premier series schedule resumes on Sunday, May 17th at Darlington Raceway, the high-speed, egg-shaped oval in the heart of the Pee Dee region of South Carolina.

Darlington has a well-earned reputation as one of the sport’s most challenging places to race. The track measures just 1.366 miles in length, but Aric Almirola’s track qualifying record is a jaw-dropping 184.145 mph. “The Track Too Tough to Tame,” as Darlington is also known, is fast, unforgiving and treacherous, showing no mercy for even the slightest on-track errors in judgment: Make a mistake here and it will cost you dearly.

And even drivers who get through a race clean usually leave with a “Darlington stripe” from where the right sides of their cars pancake the walls. It really is that tough.

Darlington has been a staple on the NASCAR premier series circuit since it opened in 1950. At that time it was one of only two paved ovals in NASCAR, and the only one longer than 0.500 miles. Darlington was the sport’s first true superspeedway and it remains a vital link to the roots of stock-car racing.

Here are six Hall of Fame memories from Darlington 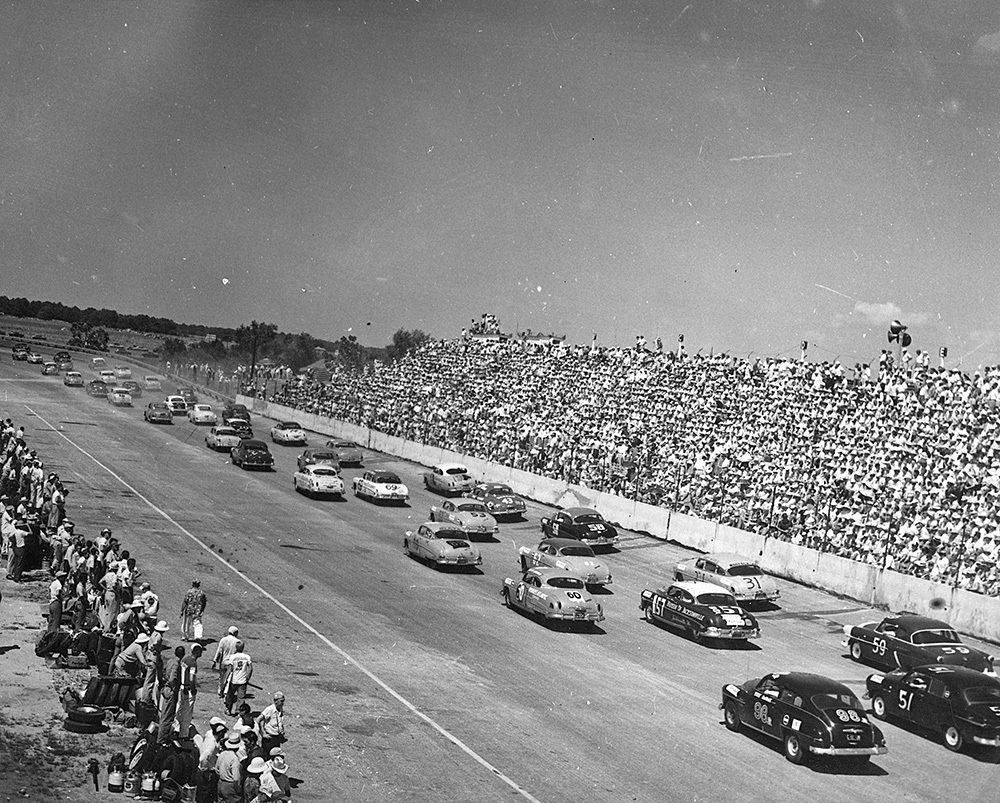 When Darlington hosted the inaugural Southern 500 on September 4, 1950, it drew a huge 75-car field for the first 500-mile race in NASCAR history. Driving a 1950 Plymouth coupe with a six-cylinder engine that got better gas mileage than the big Oldsmobile and Cadillac V-8s, Johnny Mantz won the first Darlington race by 9 laps over Hall of Famer Fireball Roberts (2014). It took Mantz 6 hours, 38 minutes and 40 seconds to win that first race. The first Darlington race was so successful that the following year, the field swelled to a track record 82 cars. 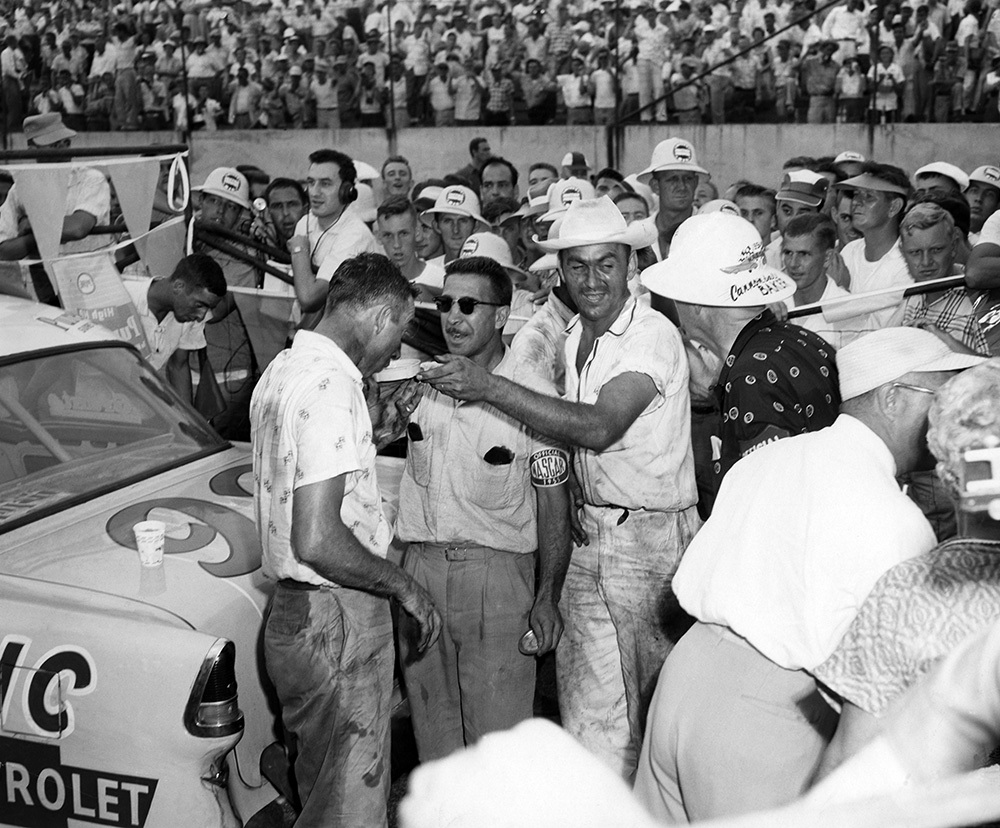 The 1955 Southern 500 was huge for Hall of Famer Herb Thomas (2013) and for Chevrolet. Thomas lapped the entire 69-car field to win his then-record third Southern 500, a race that at the time no one else had even won twice. While Thomas was best known as the driver of the Fabulous Hudson Hornet in the early 1950s, he drove a 1955 Chevrolet to victory at Darlington. Thomas’ Chevrolet was prepared by legendary mechanic Smokey Yunick and featured a special set of hard-compound Firestones that allowed Thomas to run the full race on a single set of tires. 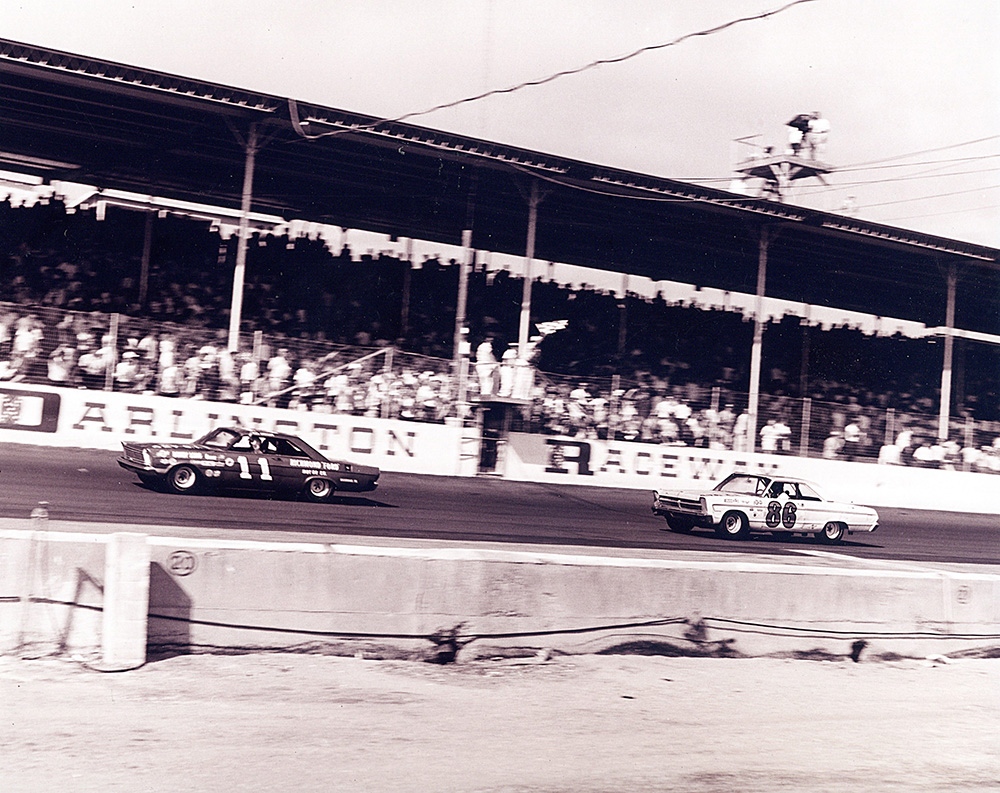 The biggest margin of victory in NASCAR history came at Darlington in 1965. Photo courtesy of NASCAR Archives & Research Center via Getty Images.

Although Hall of Famer Ned Jarrett (2011) only won once at Darlington, he made it count in a big way. In the 1965 Southern 500, Jarrett set a NASCAR record that stands to this day and one likely to stand forever: His margin of victory was a whopping 14 laps ahead of second-place finisher and fellow Hall of Famer Buck Baker (2013). In an era when race cars weren’t as reliable as they are today, just 15 of the 44 starters in the 1965 Southern 500 were still running at the end of the race. 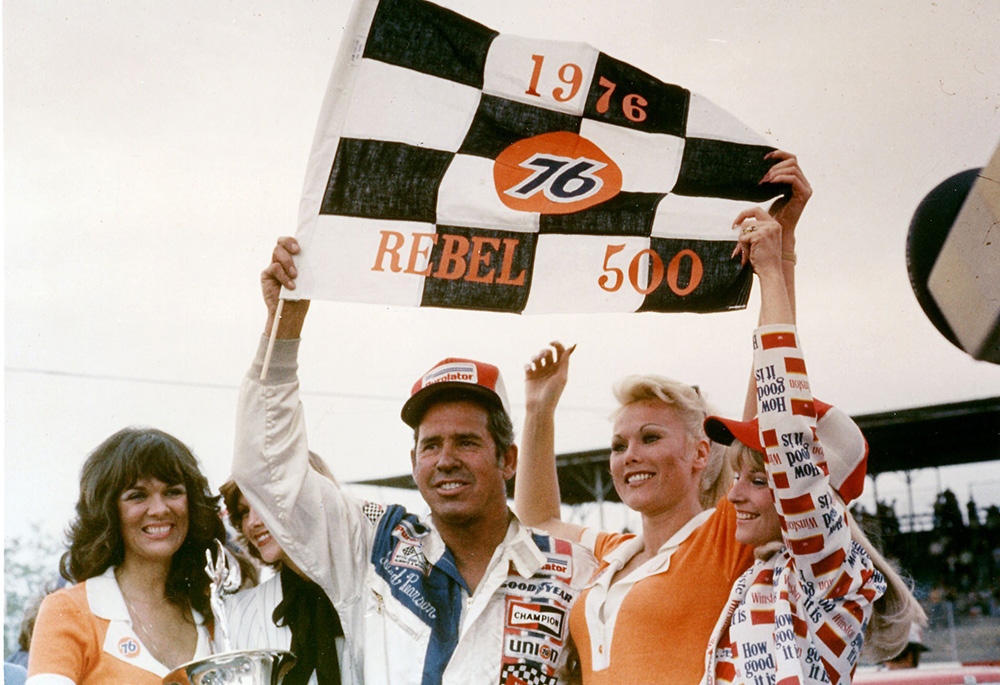 Best of the Best

Given the difficulty of racing at Darlington, it’s no surprise that the drivers who fare the best at the Track Too Tough to Tame tend to be NASCAR’s elite. A total of 22 different Hall of Fame drivers have won premier series races at Darlington, along with more than a dozen Hall of Fame team owners, crew chiefs and engine builders. South Carolina native David Pearson (2011) tops with driver list with 10 Darlington victories. Pearson was closely followed by Dale Earnhardt (2010), a nine-time winner at the 1.366-mile track. Jeff Gordon (2019) won seven Darlington races himself, including a record four consecutive Southern 500s from 1995-98. All told, drivers inducted into the NASCAR Hall of Fame won 75 of the first 116 premier series contested at Darlington. 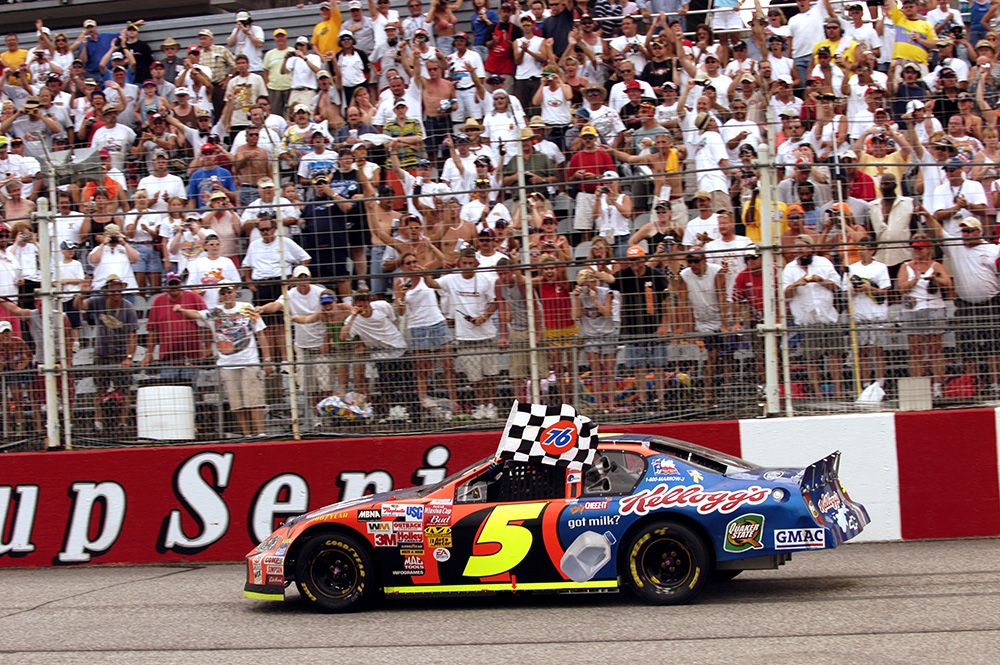 Not many drivers win their first and last race at the same track, but Terry Labonte did. Photo courtesy of NASCAR Archives & Research Center via Getty Images.

Hall of Famer Terry Labonte (2016) won his first and last premier series races at Darlington. In 1980, Labonte wheeled Billy Hagan’s No. 44 Chevrolet past David Pearson (2011) on the penultimate lap of the Southern 500 to score his first victory. Labonte led only the final two of 367 laps in securing the win.

Flash forward 23 years and Labonte won the 22nd and final race of his career, this time behind the wheel of a Chevy owned by Hall of Famer Rick Hendrick (2017). Like his Darlington triumph in 1980, Labonte led only once, pacing the final 33 laps. 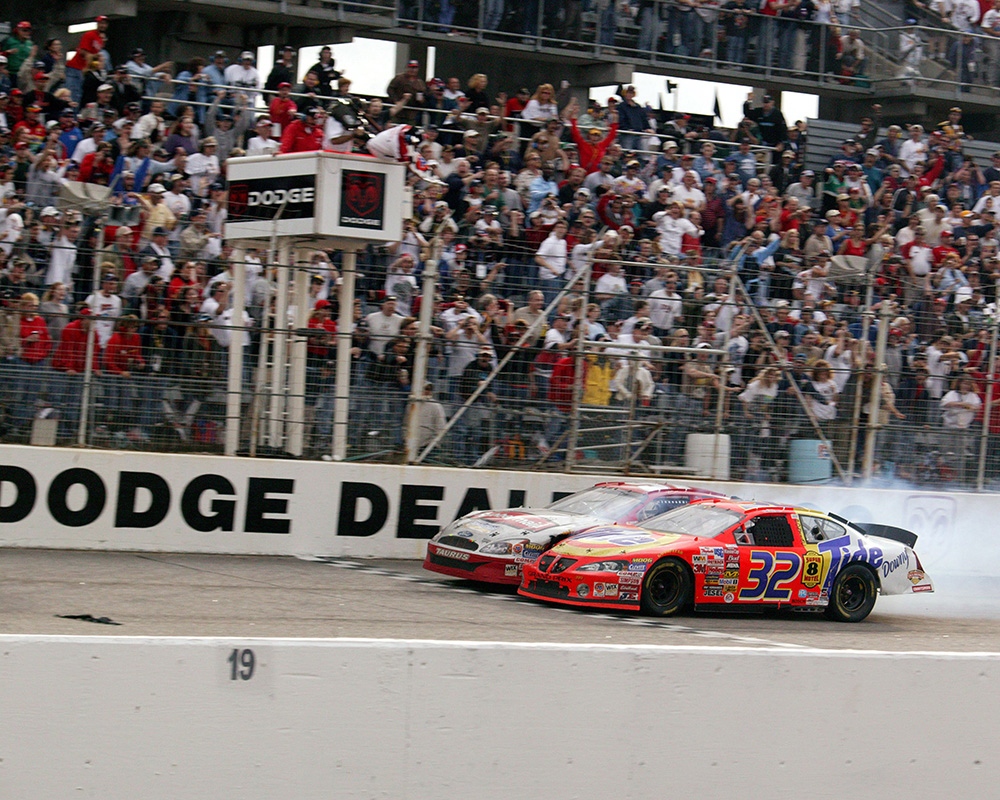 One of the most dramatic finishes in NASCAR history saw Ricky Craven and Kurt Busch trade paint all the way to the checkered flag. Photo courtesy of NASCAR Archives & Research Center via Getty Images.

The 2003 Dodge Dealers 400, the spring race at Darlington Raceway, featured what at the time was closest finish in premier series history, with Ricky Craven outdueling Kurt Busch by a mere 0.002 seconds. During the final few laps, Craven and Busch repeatedly took turns beating and banging on each other in one of the most memorable NASCAR battles of all time. Craven’s Pontiac is on display in Heritage Speedway in the NASCAR Hall of Fame.