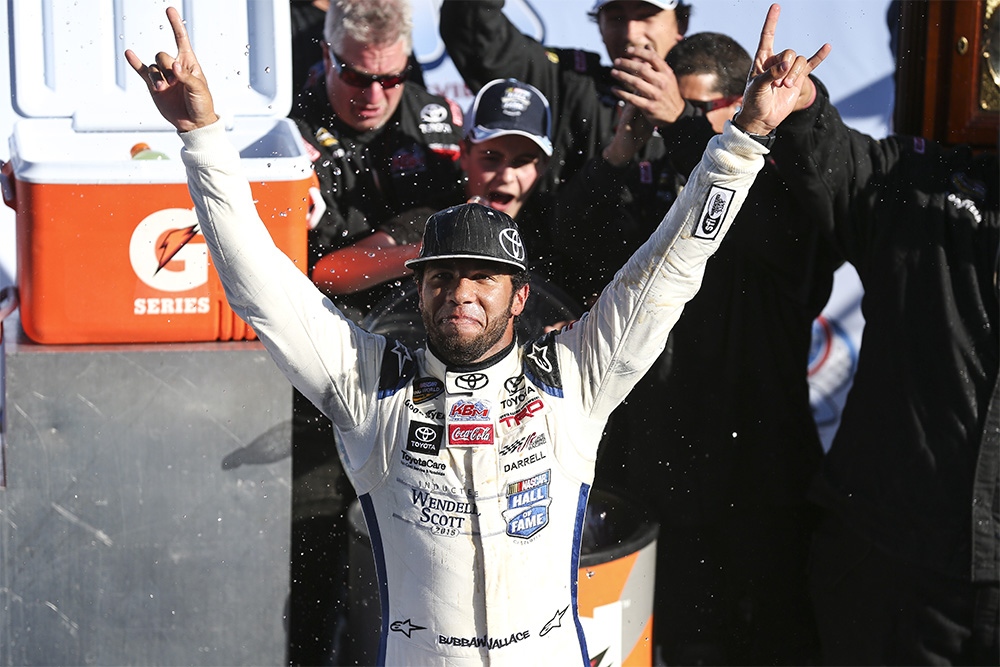 A jubilant Bubba Wallace was all smiles after honoring Wendell Scott’s legacy with a victory in a Truck Series race at Martinsville. Photo courtesy of Sarah Glenn/NASCAR via Getty Images

History and tradition are big parts of the NASCAR experience. The roots of NASCAR stretch all the way back to 1948 when the sanctioning body was formed by Hall of Famer William H.G. France (2010).

Even today, there are NASCAR competitors with ties to the sport’s earliest days.

One of those racers is Darrell “Bubba” Wallace Jr., currently the only full-time Black driver in the premier series. Six years ago, Wallace paid tribute to one of his heroes, Hall of Famer Wendell Scott (2015), in a NASCAR Camping World Truck Series race at Virginia’s Martinsville Speedway. 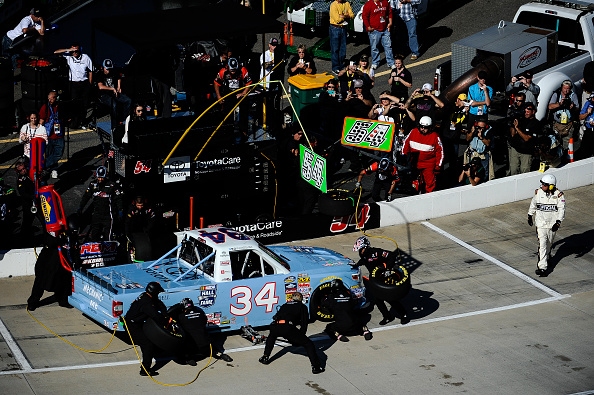 Kyle Busch Motorsports switched from No. 54 to No. 34 for this race to pay tribute to Wendell Scott. Photo courtesy of Rainier Ehrhardt/NASCAR via Getty Images

In the Kroger 250 at Martinsville, Wallace drove a Kyle Busch Motorsports Toyota to victory over Timothy Peters and Matt Crafton. Wallace led 97 of 200 laps at the 0.526-mile short track to claim the victory.

What made the race unique was that Wallace’s KBM truck switched from its usual No. 54 to No. 34, which was Scott’s number. The truck was painted in a light blue similar to what Scott raced and was lettered on the side to say “Mechanic: Me,” just like Scott’s car. 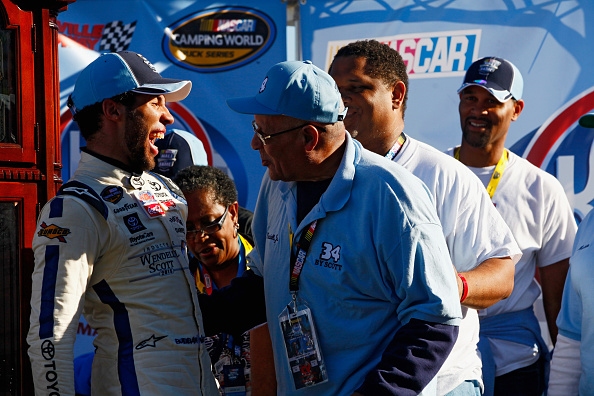 Bubba Wallace’s triumph was cause for celebration in Victory Lane at Martinsville. Photo courtesy of Brian Lawdermilk/NASCAR via Getty Images

Scott, the only Black driver to win a premier series race, was a native of Danville, Virginia, just 30 miles from Martinsville and his family was on hand to see Wallace’s historic victory.

“That was so fun, man,” Wallace said after the race. “Martinsville's my favorite place to come to. With the whole Wendell Scott family here, this is a special moment, a perfect weekend for us, man. It's a true honor to have Wendell Scott on our Toyota Tundra, and to be able to put it in Victory Lane … I know he just said, ‘Hell, yeah,’ up there, so this is as cool as hell.”

Martinsville's my favorite place to come to. With the whole Wendell Scott family here, this is a special moment. 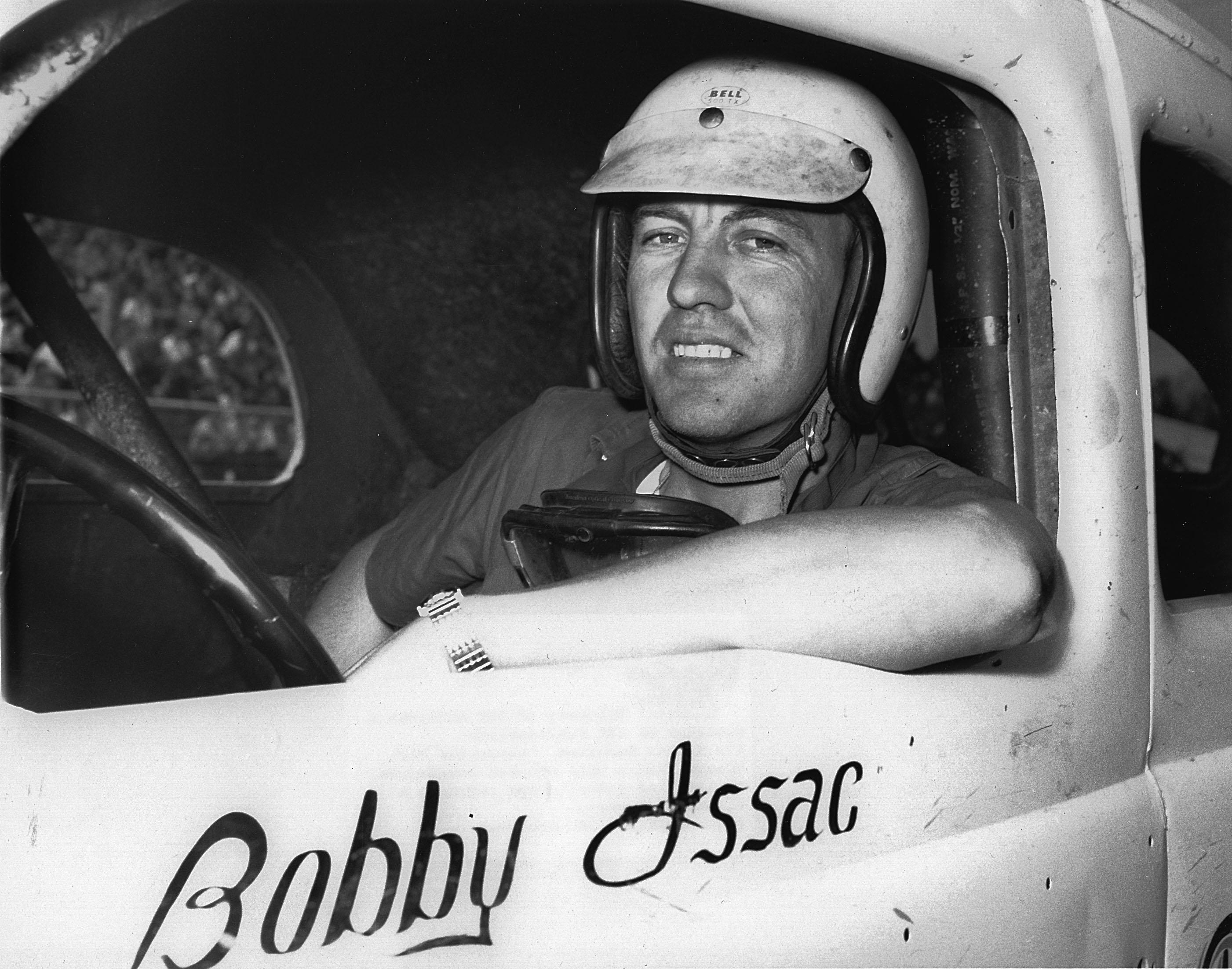 The NASCAR premier series raced 12 times at Augusta Speedway, a 0.500-mile paved oval in Georgia. The 12th and final race at the track was a 200 lapper won by Hall of Famer Bobby Isaac (2016), over Richard Petty (2010) and David Pearson (2011). Driving Nord Krauskopf’s K&K Insurance Dodge, Isaac won $1,000 for his efforts. Isaac started from the pole in the race and during the season set a record that still stands today, qualifying in the top spot 19 times. 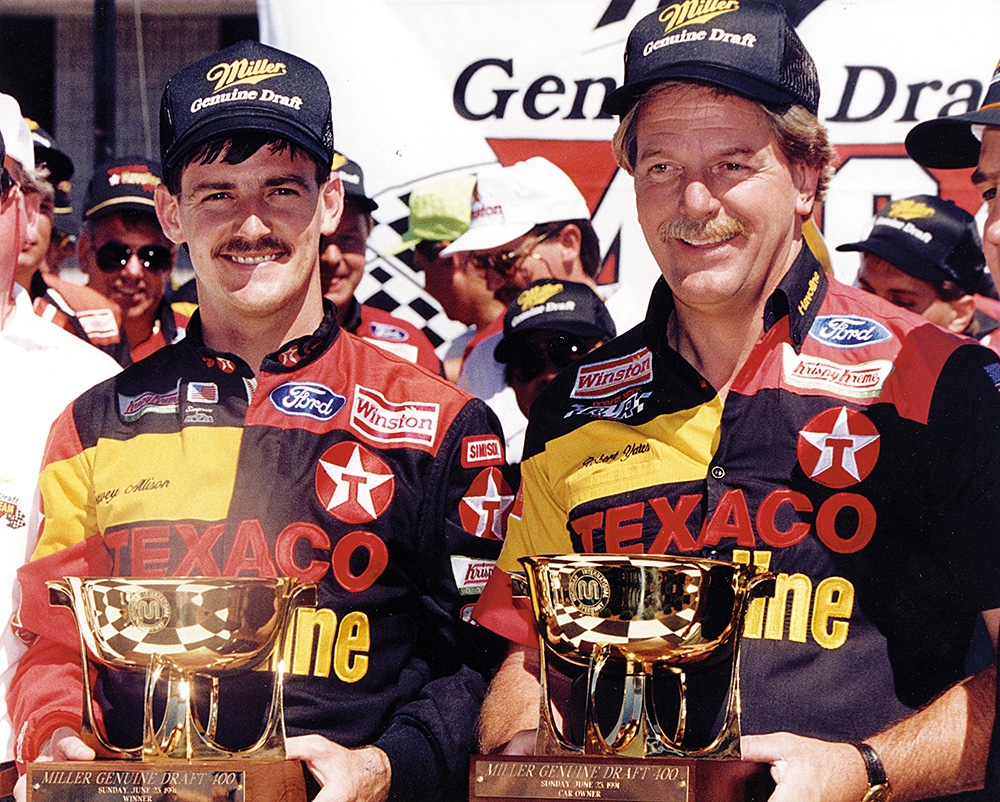 At North Carolina Motor Speedway, Hall of Famer Davey Allison (2019) led 100 of 492 laps to win the AC Delco 500 over Harry Gant and Mark Martin (2017). Allison piloted the No. 28 Havoline Ford Thunderbird fielded by team owner and fellow Hall of Famer Robert Yates (2018) to a margin of victory of 0.91 seconds. Winning at the 1.017-mile Rockingham track was worth $66,050 for Allison and Robert Yates Racing. 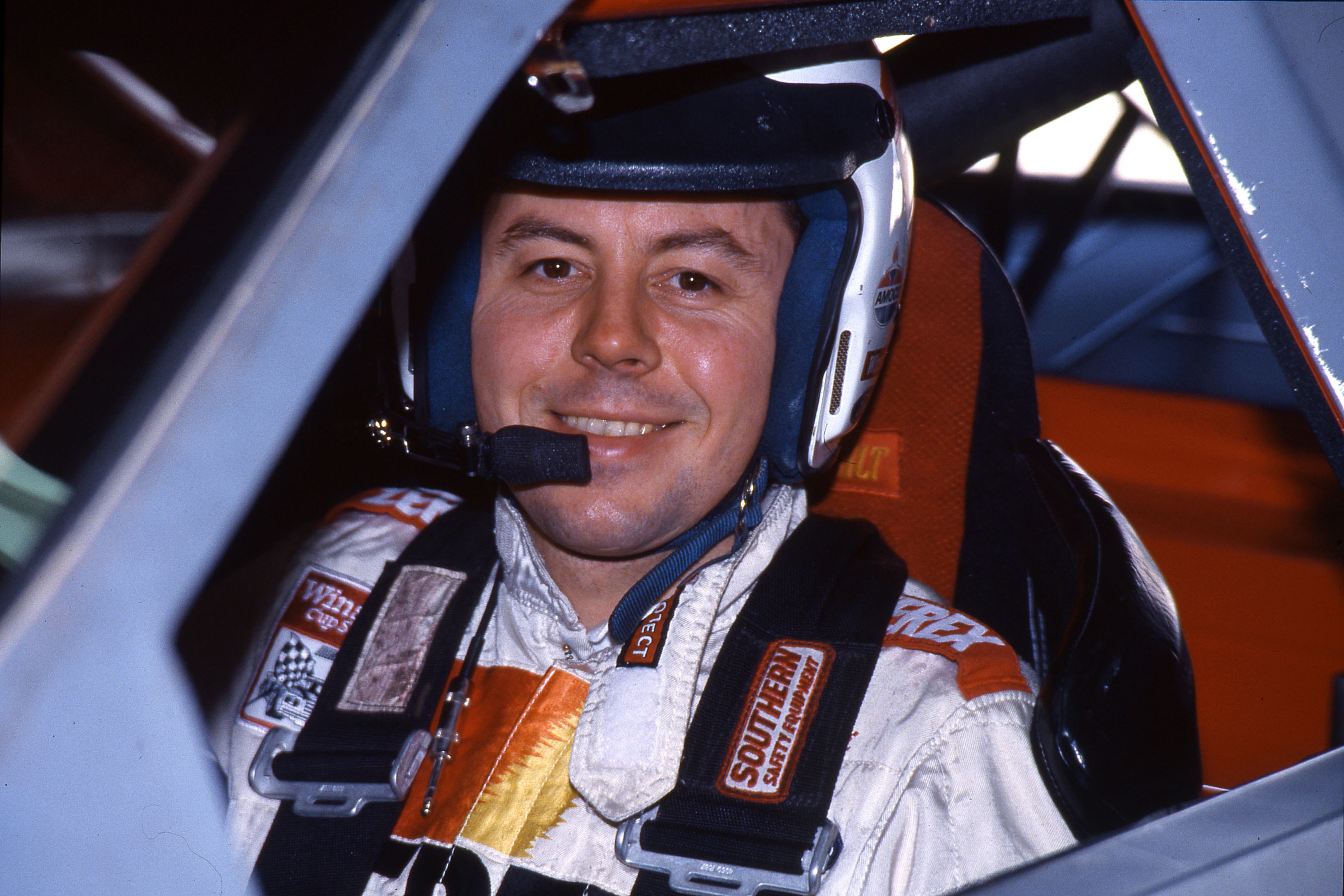 After Hall of Famer Alan Kulwicki (2019) famously won his first race at Phoenix International Raceway in 1988, it would take him nearly two years to win again. Kulwicki’s second victory came at North Carolina Motor Speedway, where he outdueled Bill Elliott (2015) and Harry Gant to win. Kulwicki led 151 of 492 laps in the race, earning $53,300 for his AK Racing team in the process. 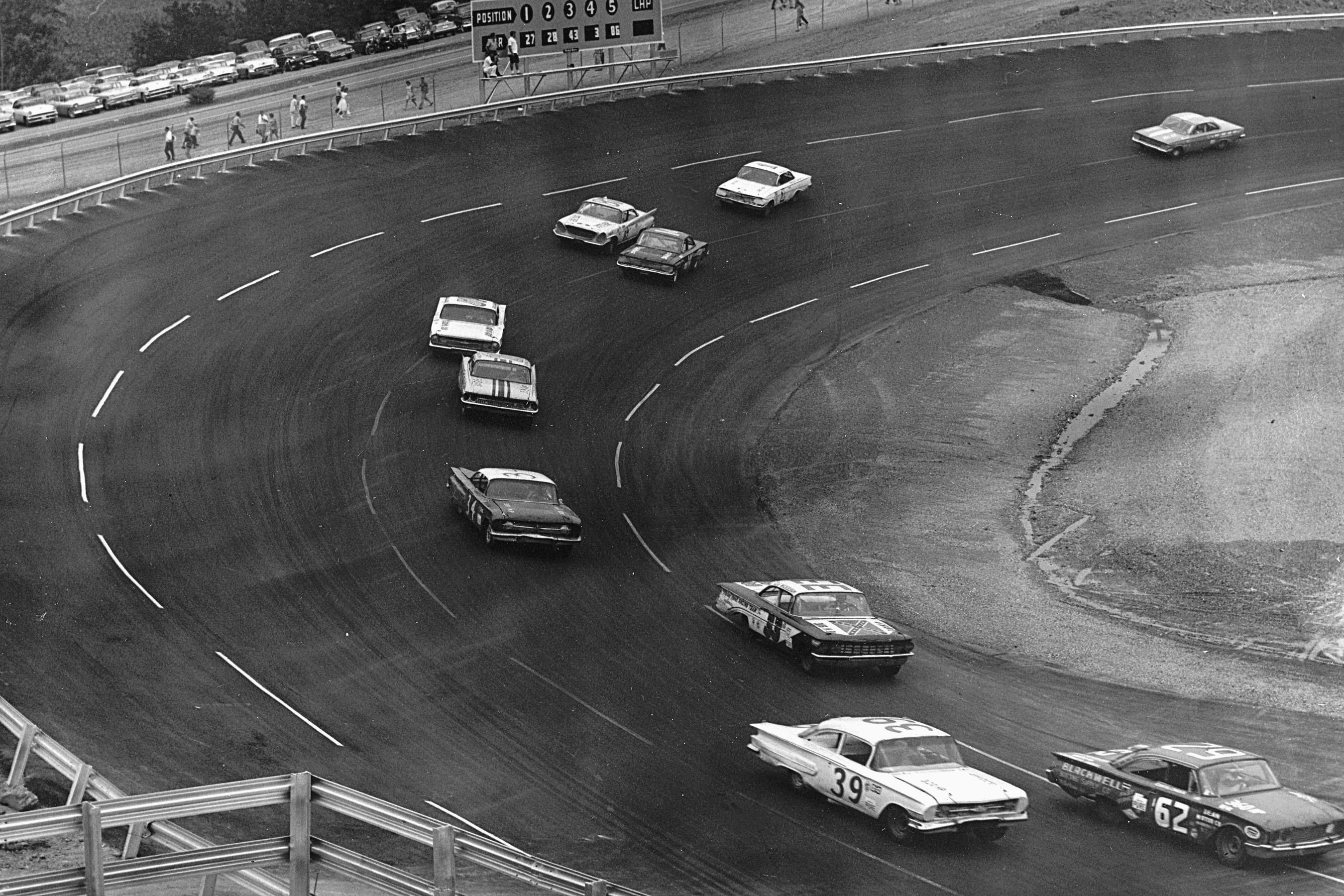 The competition at Bristol was fierce dating back to the track’s first season in 1961. Photo courtesy of NASCAR Archives & Research Center via Getty Images

When Bristol International Speedway (now Bristol Motor Speedway) opened in 1961, it was a mostly flat 0.500-mile oval, not the high-banked surface drivers race on today. Bristol’s second premier series race was the 1961 Southeastern 500, which was won by a pair of Hall of Famers: Joe Weatherly (2015) took the victory driving a Bud Moore (2011) owned Pontiac. Weatherly led Rex White (2015) to the checkered flag by seven car lengths to claim the $3,680 first-place money. 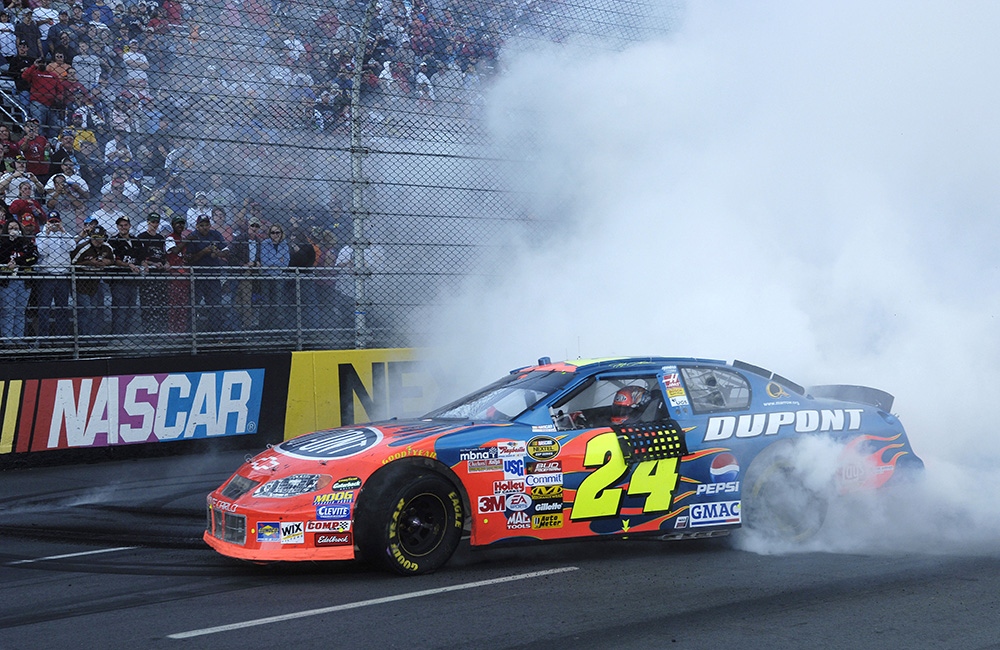 Jeff Gordon celebrated his victory in the Subway 500 with a tire-melting burnout in his Hendrick Motorsports Chevrolet. Photo courtesy of Rusty Jarrett/Getty Images

For many drivers, tiny Martinsville Speedway is one of the toughest tracks to master, a claustrophobic 0.526-mile paper-clip shaped track in Southern Virginia. For Hall of Famer Jeff Gordon (2019), Martinsville was his favorite track, a place where he won nine of his 93 career premier series races. In 2005, Gordon led 151 of 500 laps to win the Subway 500 and the $184,926 that went with the victory. Fellow Hall of Famer Tony Stewart (2020) finished second, 0.235 seconds behind Gordon. 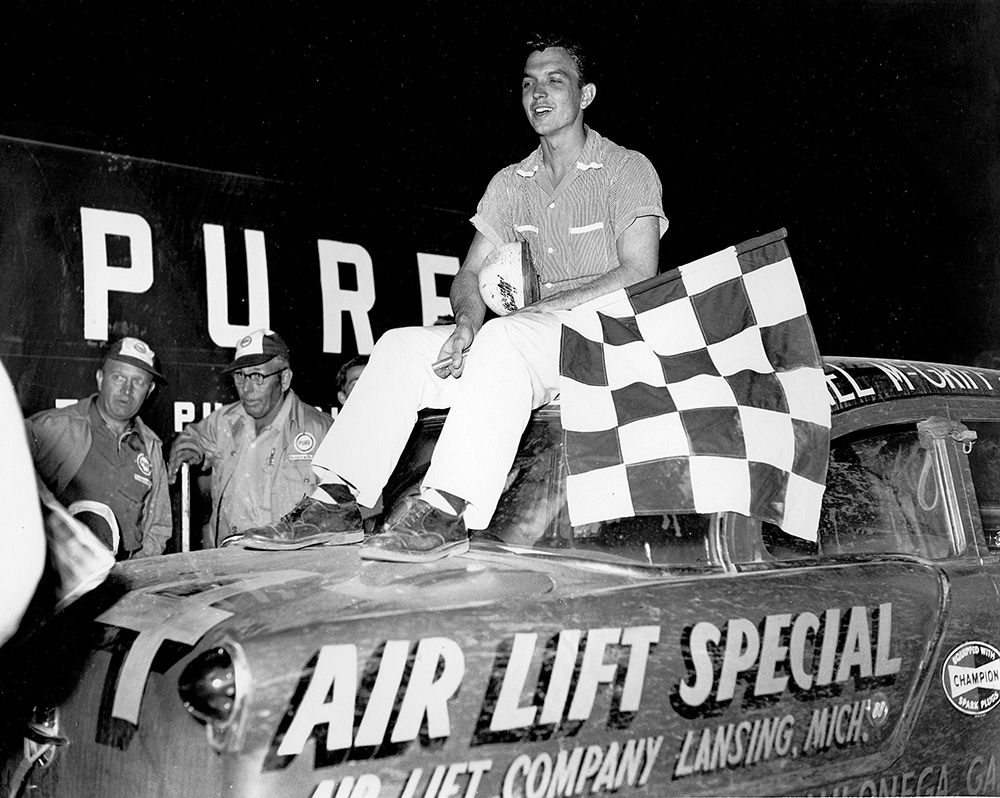 One of the original tracks on the NASCAR premier series circuit was North Wilkesboro Speedway, a tricky 0.625-mile dirt track located deep in the heart of North Carolina moonshine country. The 1954 Wilkes 160 was captured by West Coast racer Hershel McGriff, who bested Hall of Famers Buck Baker (2013) and Herb Thomas (2013) to win $1,000. The win was the fourth of the season for McGriff, who after 1954 would next race in the premier series in 1971.