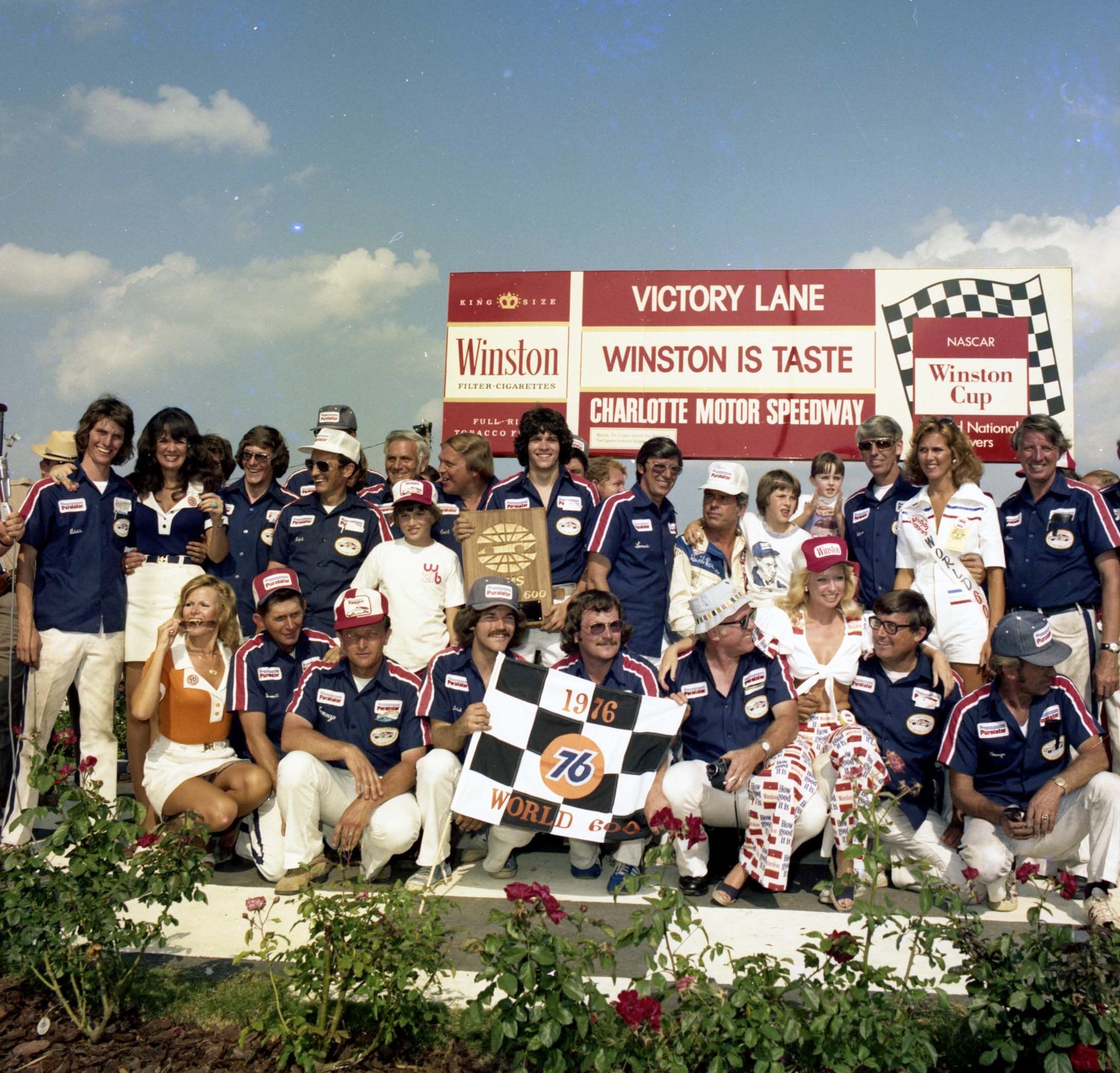 David Pearson and his Wood Brothers Racing teammates gather for a team picture after winning the 1976 World 600. Leonard Wood is next to Pearson and Glen Wood is on the far right. NASCAR Hall of Fame Collection, Gift of R.J. Reynolds Tobacco Company

This Sunday, the stars of NASCAR’s premier series will race at Charlotte Motor Speedway in the grueling Coca-Cola 600, the sport’s longest event. Forty-five years ago to the day, the 1976 World 600 (as it was known then) took place, and David Pearson (2011) was the class of the field that afternoon. Starting from the pole in his No. 21 Wood Brothers Mercury, “The Silver Fox” dominated the field, leading 230 laps. He picked up his third win in the 400-lap affair; he also won in 1961 and 1974. 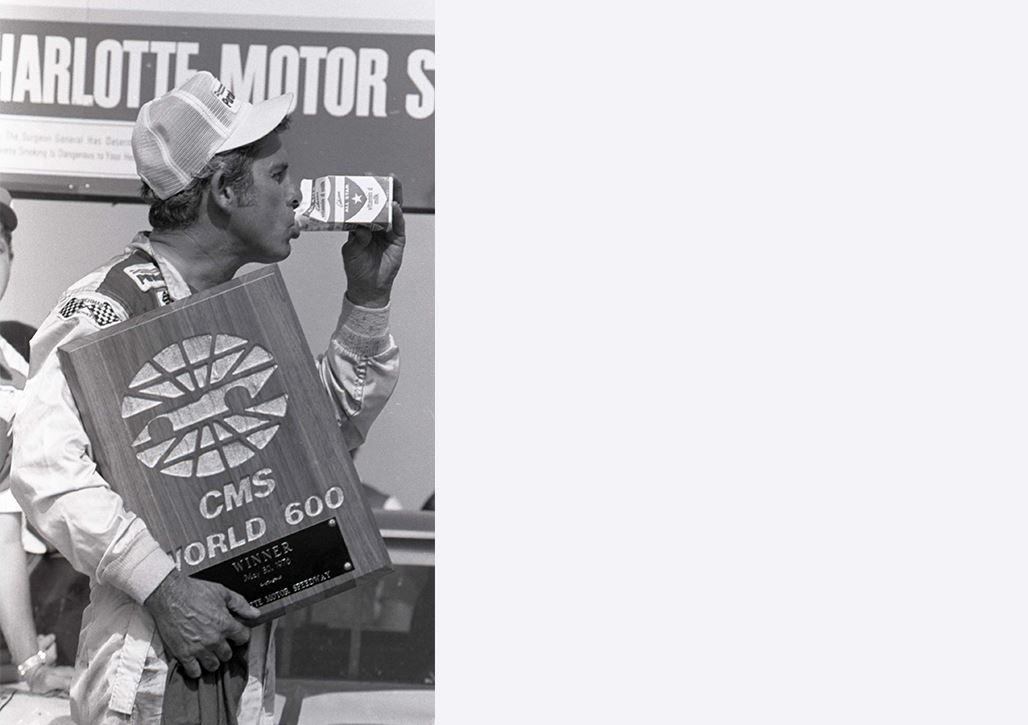 Also in the field that hot afternoon was Janet Guthrie, the first woman to successfully qualify and compete in a superspeedway race in NASCAR’s premier series.

However, racing in the World 600 on Memorial Day weekend was not her original plan.

Throughout the first half of the 1970s Guthrie competed in sports car competition and was an established road racer. Her career took a turn in 1976 when car owner Rolla Vollstedt offered her an Indy car ride. From there, she made a quick transition to oval-style racing, setting her sights on qualifying for the 1976 Indianapolis 500 that May. 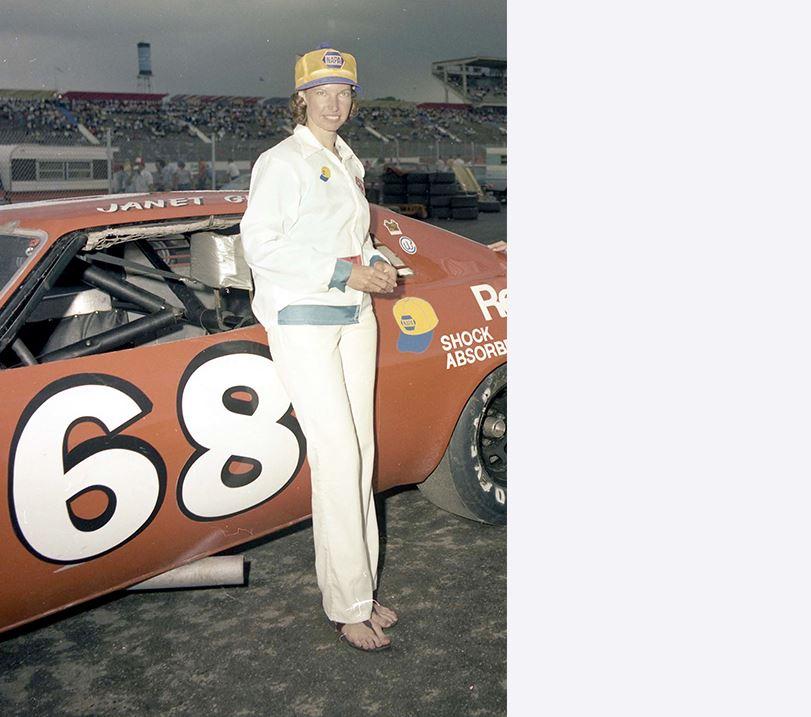 Janet Guthrie stands next to her Chevy Laguna before the World 600 in 1976. NASCAR Hall of Fame Collection, Gift of R.J. Reynolds Tobacco Company

But throughout the qualifying sessions, Vollstedt’s car lacked speed, and as time trials neared completion, it appeared that Guthrie may not make the race. At the same time, her saga attracted extensive media coverage, and Charlotte Motor Speedway Chairman O. Bruton Smith (2016) and General Manager H.A. “Humpy” Wheeler noticed. They realized Guthrie could bolster ticket sales, generate publicity and attract national TV coverage for the upcoming World 600. They began brokering a plan to lure Guthrie to the South—but only if she failed to qualify for the Indianapolis 500.

As it turned out, Guthrie did not make the field at Indy. 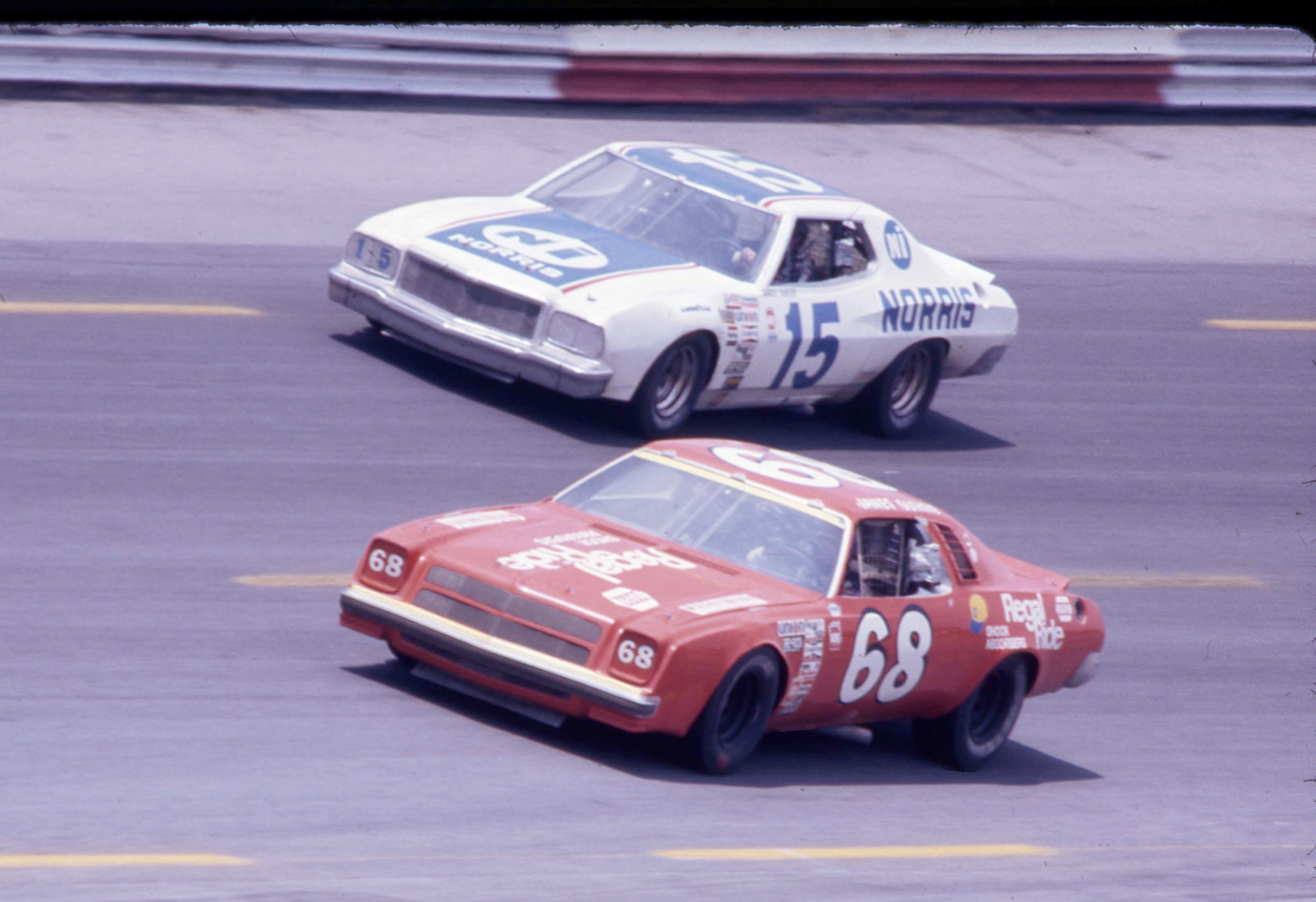 Janet Guthrie (No. 68) on track next to Buddy Baker in the 1976 World 600. Guthrie was best known for driving a green Kelly Girl-sponsored car during most of her NASCAR career. In her debut race in 1976, however, she drove a red car featuring NAPA/Regal Ride and Carowinds sponsorship. NASCAR Hall of Fame Collection, Gift of R.J. Reynolds Tobacco Company

But a new opportunity came together quickly in Charlotte. With the support of Smith and Wheeler, Lynda Ferreri—a First Union Bank executive and vice president of the Charlotte Chamber of Commerce—became involved in the effort. She became the car owner who would take Guthrie on as a driver. 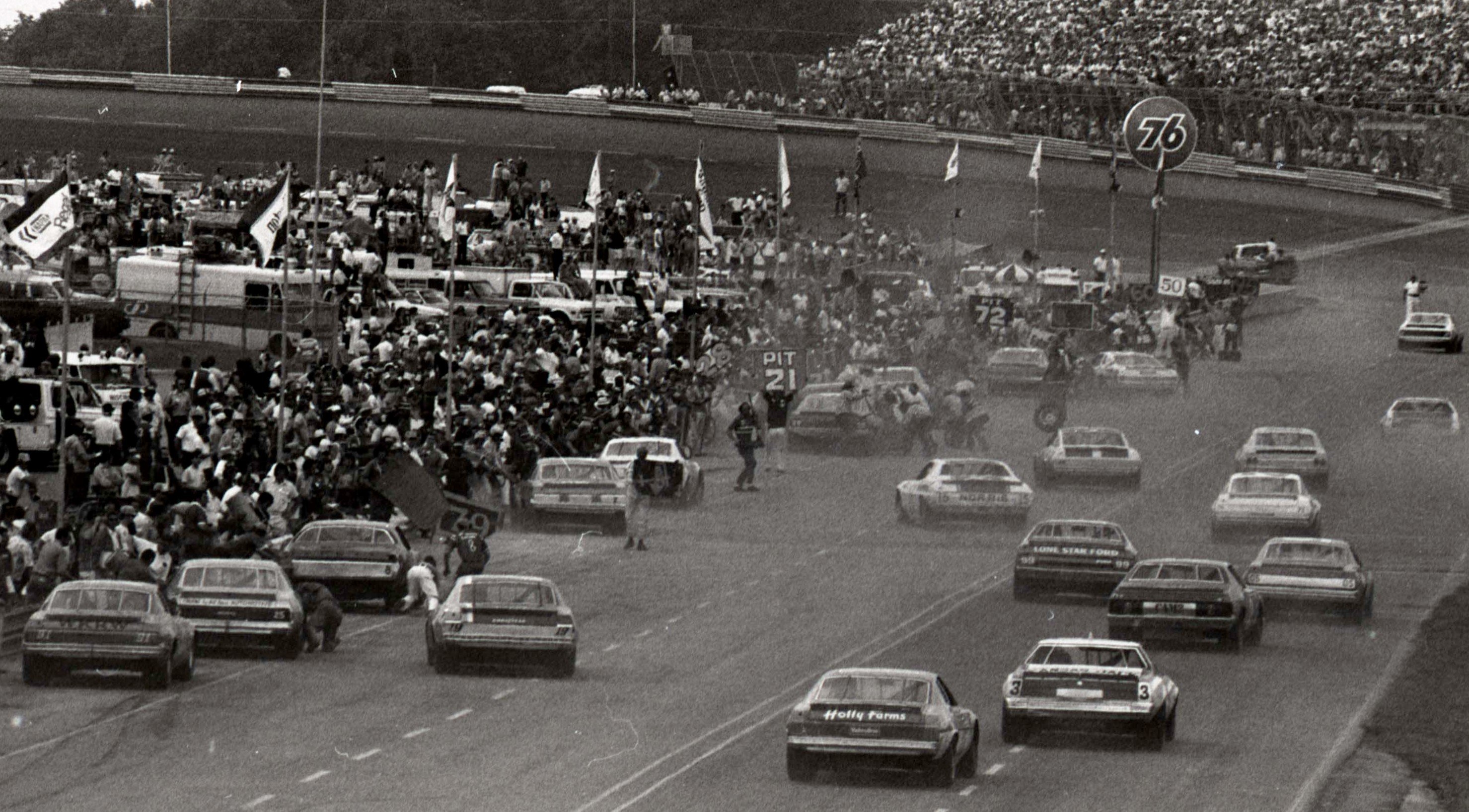 In 1976, Pit Road was a lot different (and more chaotic) than today. NASCAR Hall of Fame Collection, Gift of R.J. Reynolds Tobacco Company

As for the car, Guthrie would drive a 1976 Chevrolet Chevelle Laguna previously owned by Hoss Ellington and driven by A.J. Foyt. Holman-Moody co-founder Ralph Moody was tabbed to lead the team with help from Will Cronkrite.

Guthrie made the show and raced on Memorial Day weekend—but not in the Midwest. 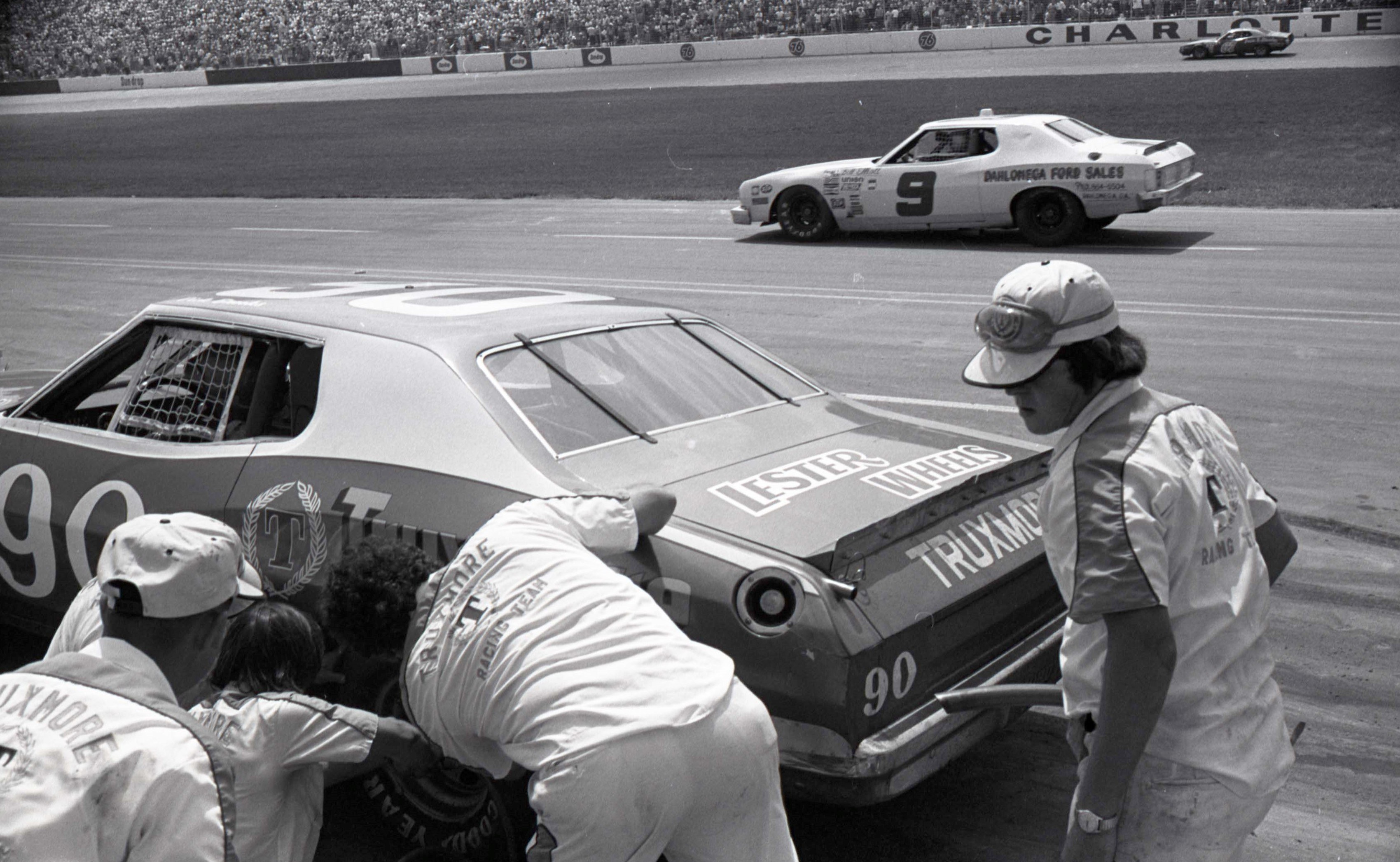 As Dick Brooks (No. 90), stops for service on pit road, a young Bill Elliott drives on by in a No. 9 Ford. NASCAR Hall of Fame Collection, Gift of R.J. Reynolds Tobacco Company

Guthrie started the race in the row directly behind two of the sport’s future superstars: Dale Earnhardt (2010) and Bill Elliott (2015).

The 1976 World 600 was only Earnhardt’s second premier series race. He drove a U.S. Army-sponsored Chevy sporting the No. 30. The engine let go early, and he finished 31st.

The event was Elliott’s fourth career start at the premier series level. He placed 23rd after the engine failed in his No. 9 Ford. His father George Elliott was the car owner. 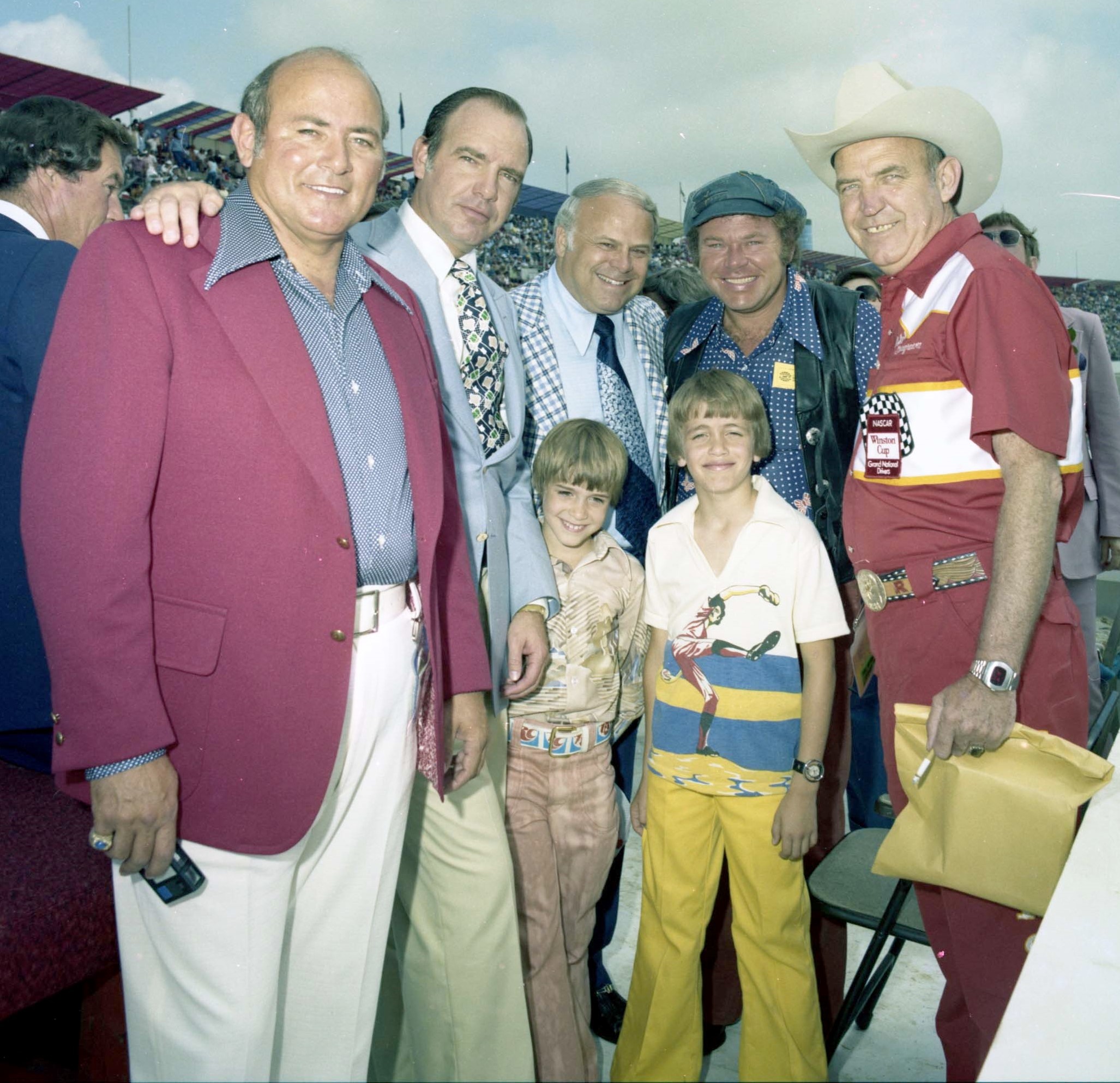 Guthrie had never competed in a race even close to 600 miles in length, and many were unsure if she had the stamina to complete the event. Yet, despite blistering on-track heat and a malfunctioning radio, Guthrie took the checkered flag in 15th place, completing 379 of the scheduled 400 laps in front of a sold-out crowd of more than 100,000 fans. Plus, much to Smith’s and Wheeler’s delight, the race garnered TV coverage on ABC.

Guthrie was awarded a plaque to recognize her successful qualification for the 1976 World 600. She graciously donated the artifact to the NASCAR Hall of Fame, where it can be seen on display on Heritage Speedway.