Winning for the first time was huge for Alan Kulwicki, but what happened afterwards made national headlines. 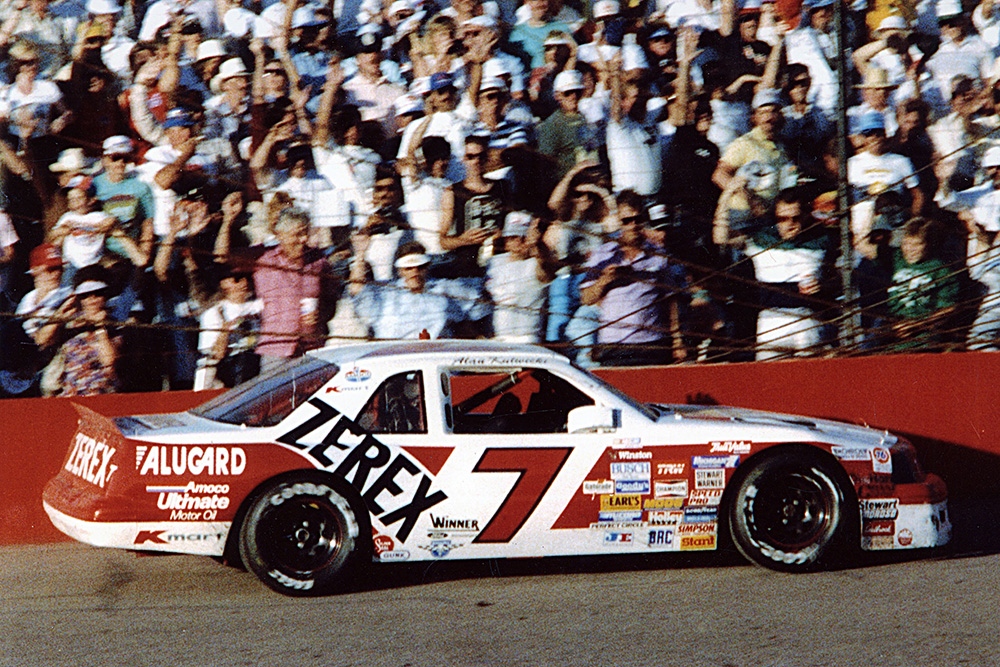 After winning his first race, Alan Kulwicki drove the wrong way around the track to salute the fans who jammed Phoenix Raceway. Photo courtesy of NASCAR Archives & Research Center via Getty Images

On November 6-8, NASCAR will do something it’s never done before: crown champions in all three of its national touring divisions at Phoenix Raceway. The Phoenix weekend will determine new champions in the Gander RV & Outdoor Truck and Xfinity Series, with the final race on November 8 deciding the premier series title.

The championship race will mark the 49th time the premier series has raced at the one-mile flat oval track, which is located in the Sonoran Desert, about 20 miles due west and a little south of Downtown Phoenix.

As big as the title bout will be, the very first Phoenix race in 1988 was one for the ages, won by Hall of Famer Alan Kulwicki (2019), who scored his first career victory in his 85thstart. 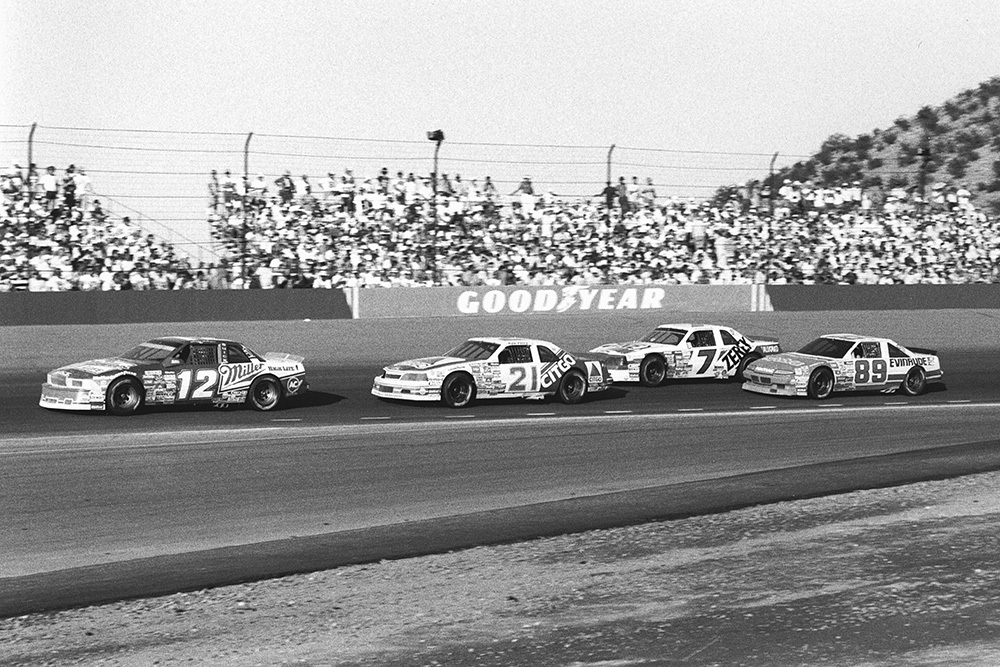 That race was especially significant because it was the first time NASCAR had ventured to the Valley of the Sun with its top racing series since 1960, when it ran on the old Arizona State Fairgrounds dirt track.

Phoenix had been a great racing town ever since native son Jimmy Bryan's heyday 30 years earlier. But Phoenix was an open-wheel town built around names like Foyt, Andretti and Unser, not around NASCAR legends such as Hall of Famers Dale Earnhardt (2010) and Rusty Wallace (2013), let alone a relative unknown like Kulwicki.

Although Phoenix opened in 1964, it had last hosted a major stock-car race in 1968, when the United States Auto Club ran there. “NASCAR made it a big deal, because it was one of the first forays into the open-wheel market,” says former Team Penske president Don Miller of the Phoenix race. “The open-wheel stuff had been there for years and years and years, and to bring a stock-car group in there it was almost like sacrilege."

NASCAR made it a big deal, because it was one of the first forays into the open-wheel market.

When the NASCAR squad arrived out west, Kulwicki was impatient to get his first race victory. Four races prior to the Phoenix event, Kulwicki had a chance to win his first premier series race at Martinsville, Va., only to see victory snatched away by a bad pit stop that dropped him off the lead lap. Kulwicki recovered enough to finish second, but it wasn’t the win he wanted.

And so Kulwicki redoubled the team's efforts for Phoenix. Always one of the smartest minds in the garage, Kulwicki figured that most of the competitors would be flat worn-out by the time the circuit hit Phoenix for the 28th and penultimate race of the 1988 season. And that would give him an excellent chance of winning.

Always one of the smartest minds in the garage, Kulwicki figured that most of the competitors would be flat worn-out by the time the circuit hit Phoenix.

Those were lean times. When the team set off for Phoenix, it was in Kulwicki's old open trailer from his short-track days in the American Speed Association, not one of the lavish 54-foot haulers that are the norm today.

He only had enough money to bring half a dozen people west with him, so he relied on his team to dig up some crew guys to pitch in for the weekend. That's the way it was in the those days, with a loose fraternity of helpers and friends of friends who asked for and received little or nothing other than the chance to work on a big-league stock car.

“There were a lot of people there on a one-race deal,” said Crew Chief Paul Andrews. “That’s when you still had to do things like that. People would just volunteer help and just show up for the West Coast races. Stuff like that sticks out in your mind.”

Once they got to Phoenix, Kulwicki qualified 21st, which meant he would start dead in the middle of the pack.

When the race began, Tom Roberts, Kulwicki’s spotter and public relations rep, realized that the spotter's stand under the press box on the frontstretch was useless, so he ran to the tall hill east of the track overlooking Turns 3 and 4 and spent the race spotting from among the race fans and Saguaro cacti.

It was there that Roberts first received word that the engine in leader Ricky Rudd's car was failing late in the race. “I told him just to ease it by,” Roberts recalled telling Kulwicki on the radio. And Kulwicki did exactly that. Rudd had led 183 laps in his Kenny Bernstein-owned Buick, and Kulwicki led only 41. But Kulwicki led the only lap that paid the money, the 312th and final circuit. His margin of victory was an astonishing 18.5 seconds, ahead of four future Hall of Famers: Terry Labonte (2016), Davey Allison (2019), Bill Elliott (2015) and Rusty Wallace (2013). The win was worth $54,100, in those days a small fortune, especially for a little team like Kulwicki’s.

Kulwicki had had more than enough time to plan how he was going to celebrate his first victory. Months earlier, his friend and mentor H.A. “Humpy” Wheeler, then general manager of Charlotte Motor Speedway, had told him that when he finally wins his first race to do something original and make his mark. 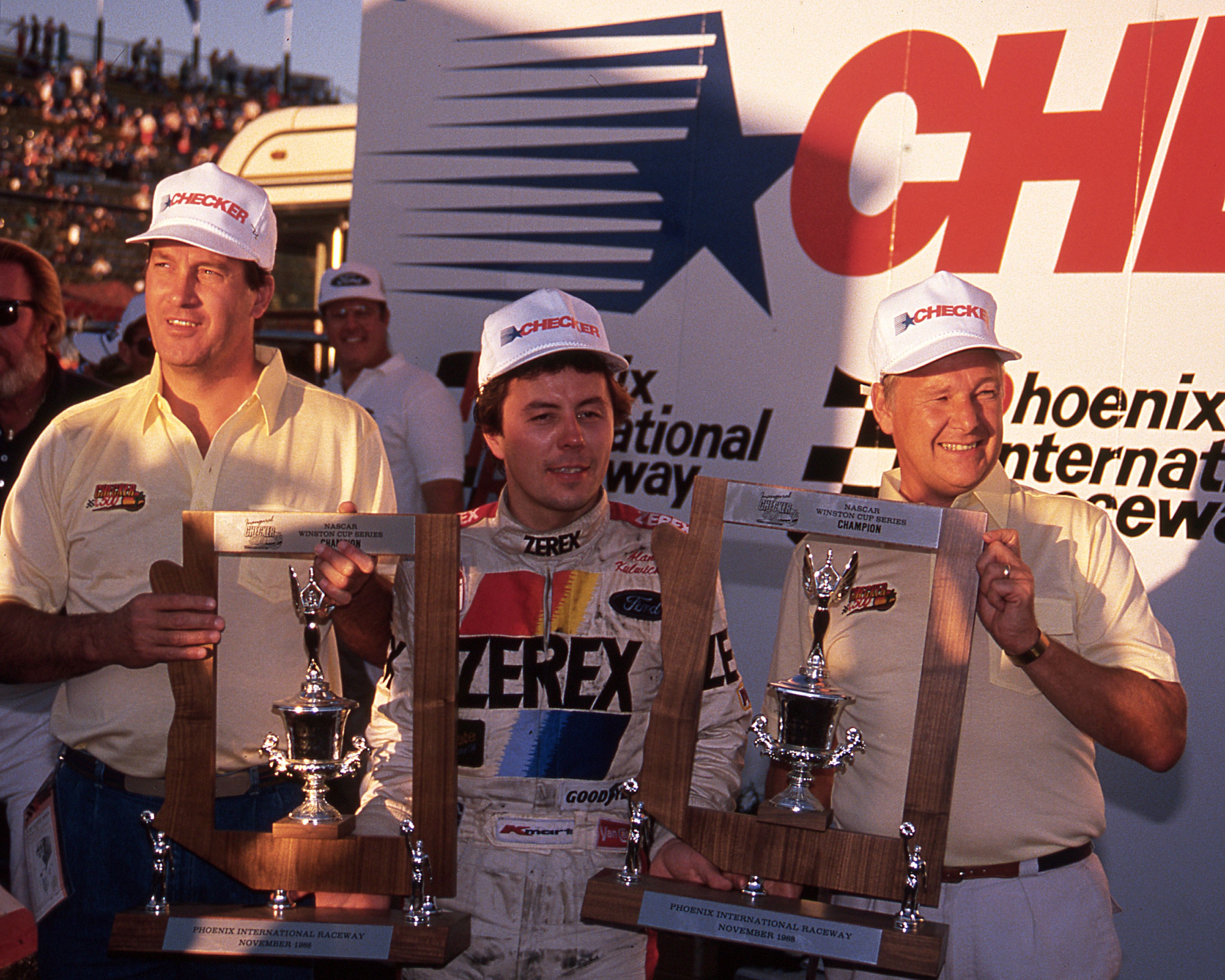 And that mark would forever come to be known as the Polish Victory Lap. Cars race counterclockwise, but Kulwicki went slowly around PIR in a clockwise direction, so the fans could see his face and he could see their faces in the grandstands. It was a stroke of sheer genius.

“He (Kulwicki) told me months before that he was going to do this,” Roberts said. “He was scared to death that NASCAR was going to really come down on him, maybe even take the victory away from him.”

He was scared to death that NASCAR was going to really come down on him, maybe even take the victory away from him.

“He had wanted to do something special and something different for his first win and only his first,” Andrews said. “That's why he didn't do it the next time he had won. When it came time to do it, he was worried that he might be in trouble with NASCAR. But he decided to take the chance and go ahead and do it, and everybody loved it. It was really cool.”

Indeed it was. Kulwicki's Polish Victory Lap made headlines from coast to coast and it ensured that even though the race itself wasn't exactly riveting, the event was a huge success.

Kulwicki was understandably ebullient in Victory Lane. “It's been a long road and it's taken a lot of hard work to get here,” he told Grand National Scene after the race. “But this has made it all worthwhile. When you work for something so hard for so long, you wonder if it's going to be worth all of the anticipation. Believe me, it certainly was.

“And what do you think of my Polish victory lap? There will never be another first win and you know, everybody sprays champagne or stands up on the car. I wanted to do something different for the fans.”

Alan Kulwicki’s last-win car from his 1992 championship season is on display at the NASCAR Hall of Fame as part of our “Dale Jr.: Glory Road Champions” exhibit, which feature 18 premier series championship cars.