This Week in NASCAR History: August 10-16

Fit for The King: In 1967, Richard Petty established two of NASCAR’s biggest records at one of its smallest tracks. 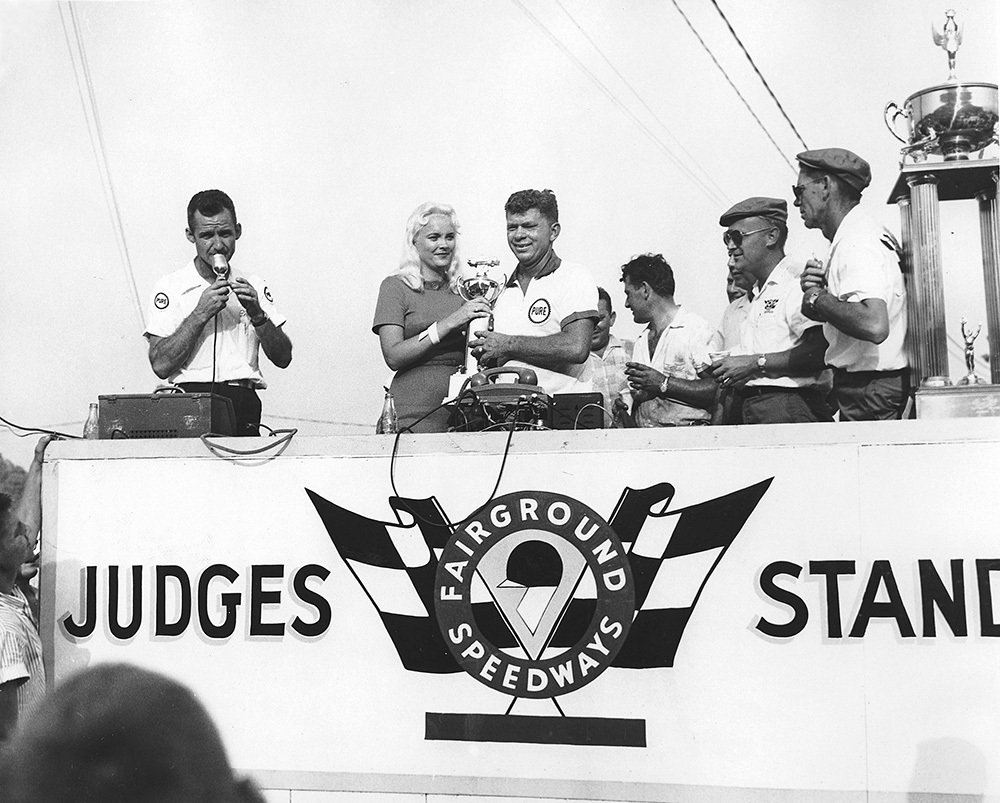 Joe Weatherly collected a trophy and $1,850 for winning the 1958 Nashville 200. Photo courtesy of NASCAR Archives & Research Center via Getty Images.

The Nashville 200 victory went to Hall of Famer Joe Weatherly (2015), who led 82 of 200 laps around the 0.500-mile paved Fairgrounds Speedway in Nashville. Weatherly drove a Holman-Moody Ford in the race and collected the $1,850 purse money for winning. During the 1958 season, Weatherly started just 15 of the 51 races on the NASCAR premier series schedule, and the Nashville race was his lone victory that year. 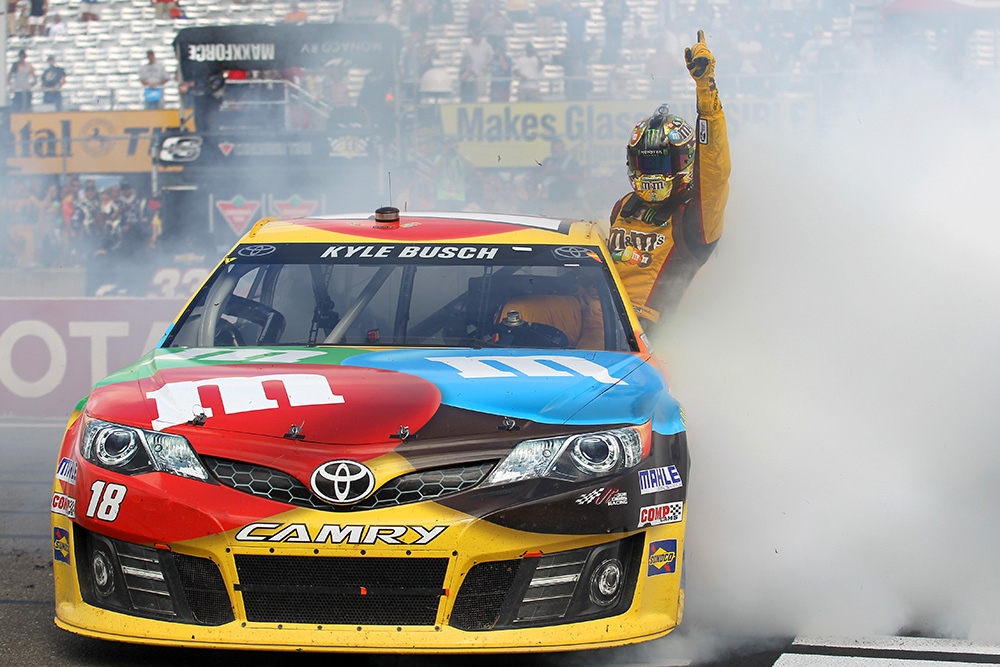 With Brad Keselowski applying intense pressure on the final lap, Kyle Busch held on to win the Cheez-It 355 at the Glen on the road course at Watkins Glen International. Driving for Hall of Fame car owner Joe Gibbs (2020), Busch led 29 of 90 laps to capture the victory and the $238,658 winner’s share of the purse. Watkins Glen was Busch’s fourth and final victory of the 2013 season, when he would end the year fourth in the NASCAR points standings. 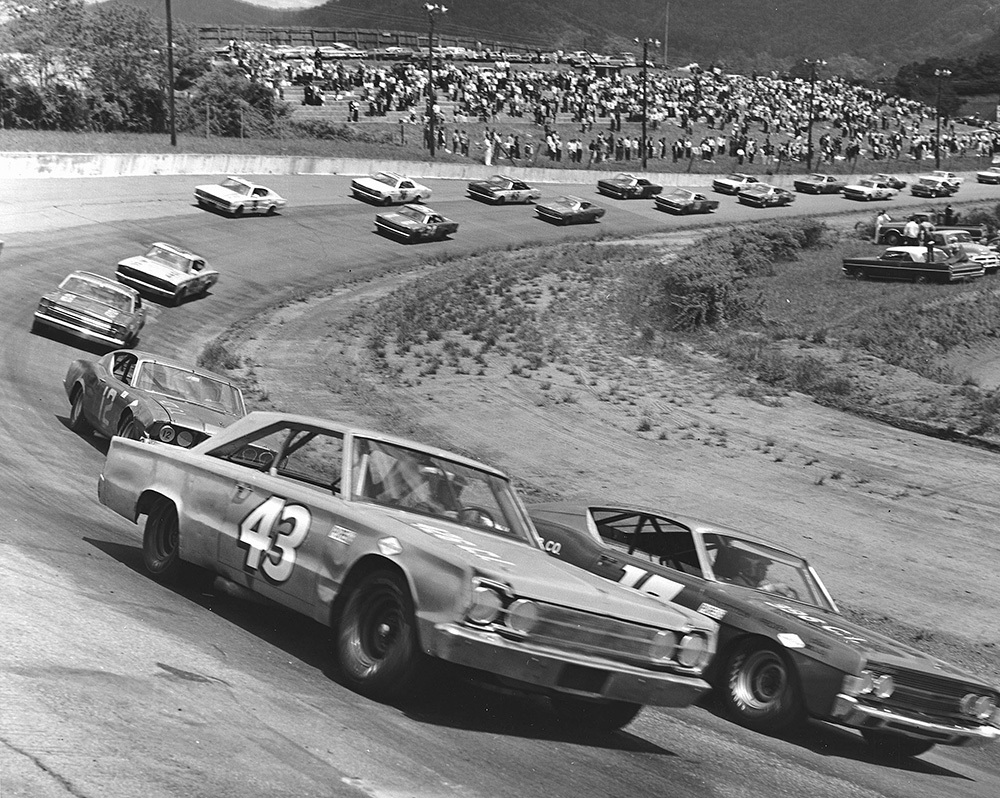 At the time, Hall of Famer Richard Petty’s (2010) victory in the Myers Brothers 250 at the 0.250-mile Bowman Gray Stadium in Winston-Salem, North Carolina, seemed like just another short-track win for the budding superstar. What no one knew at the time was that it was the first of a record 10 consecutive victories for Petty, who later that year would also set the single-season victory record with 27 wins. The Bowman Gray race paid Petty and his team $1,000. Both of Petty’s records still stand and likely never will be challenged. 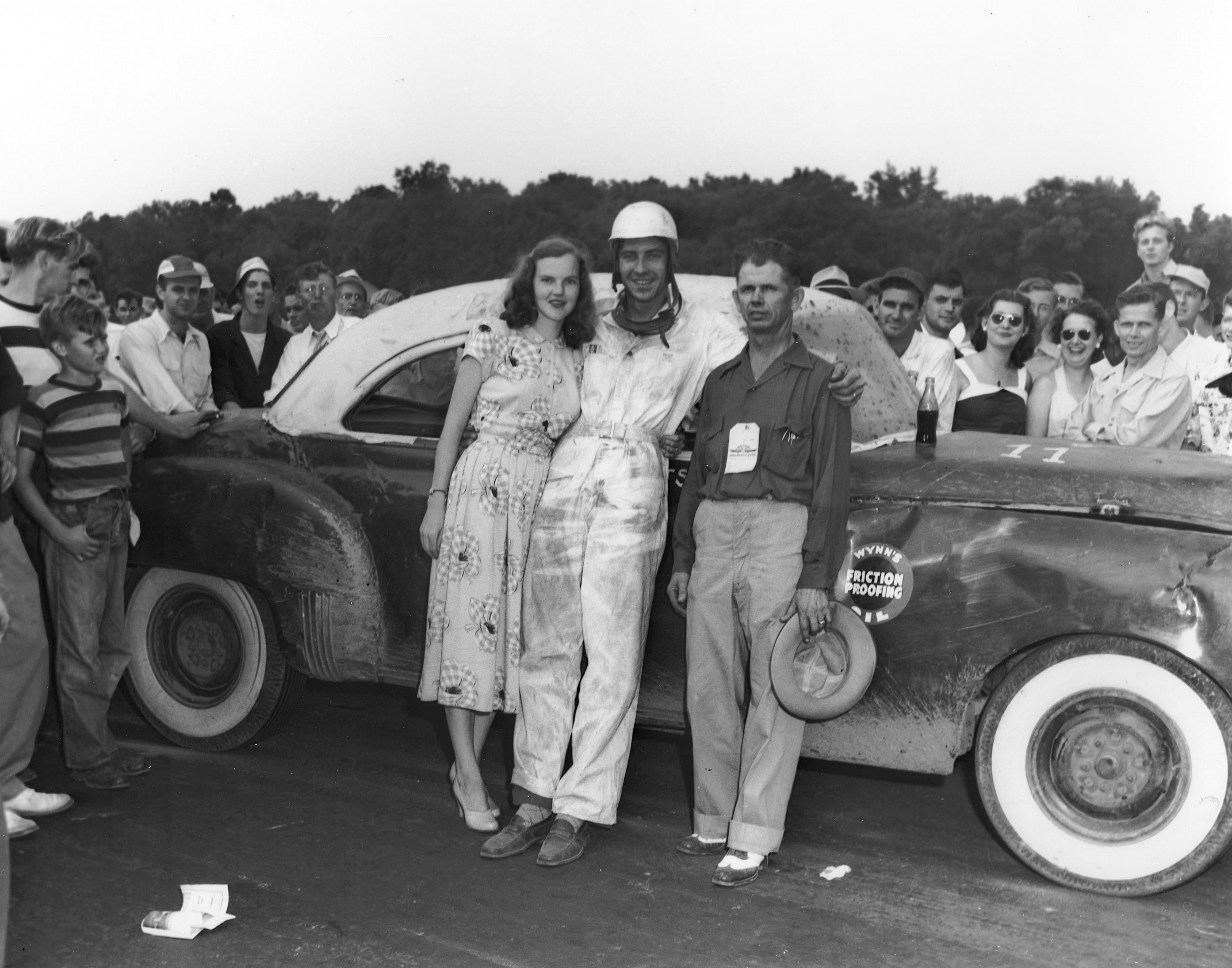 Hall of Famer Fireball Roberts (2014) scored the first of his 32 premier series race victories at Occoneechee Speedway in Hillsborough, North Carolina. Fellow Hall of Famer Curtis Turner (2016) finished second after leading the first 45 laps around the 1-mile dirt oval. But Roberts took his only lead of the race on Lap 58, holding on over the final 43 circuits to claim the $1,125 first-place money. 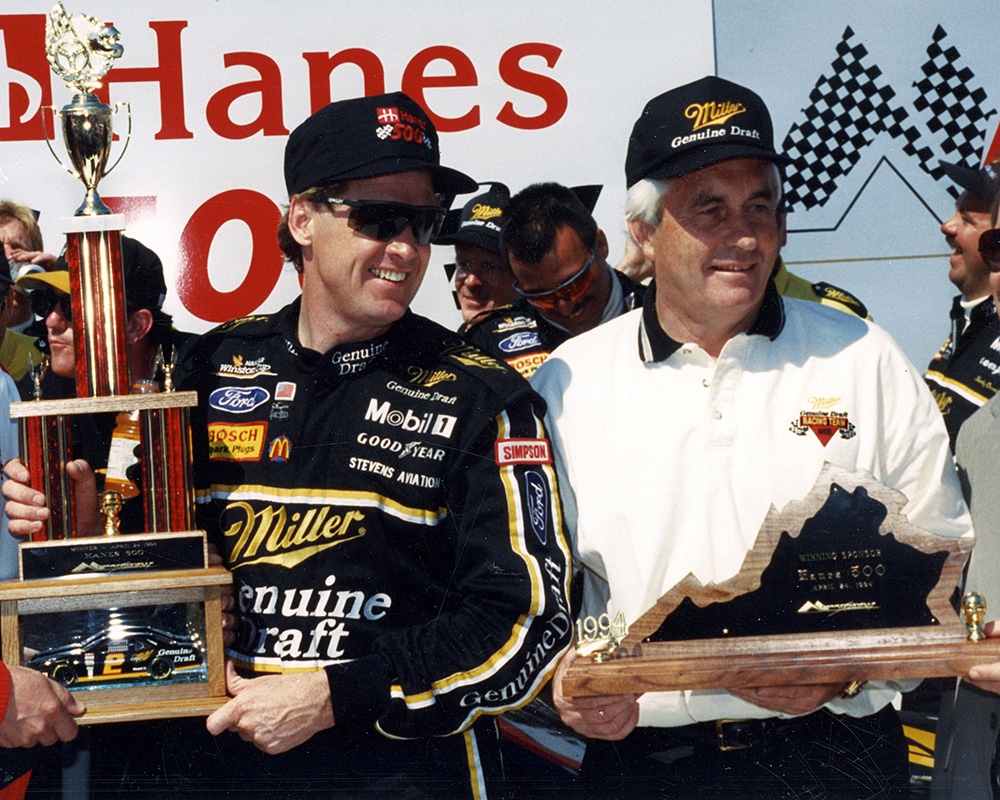 Rusty Wallace (L) and Roger Penske formed one of the most competitive driver-owner combinations in NASCAR. Photo courtesy of NANSCAR Archives & Research Center via Getty Images.

This is the birthdate of Hall of Famer Rusty Wallace (2013), who won 55 NASCAR premier series races in his career, including the 1989 championship. A total of 37 of Wallace’s 55 race victories came while driving for his close friend and fellow Hall of Famer Roger Penske (2019). In 1993, Wallace posted a single-season career-high, winning 10 races while driving for Penske. During his career, Wallace posted earnings of $49,736,148. 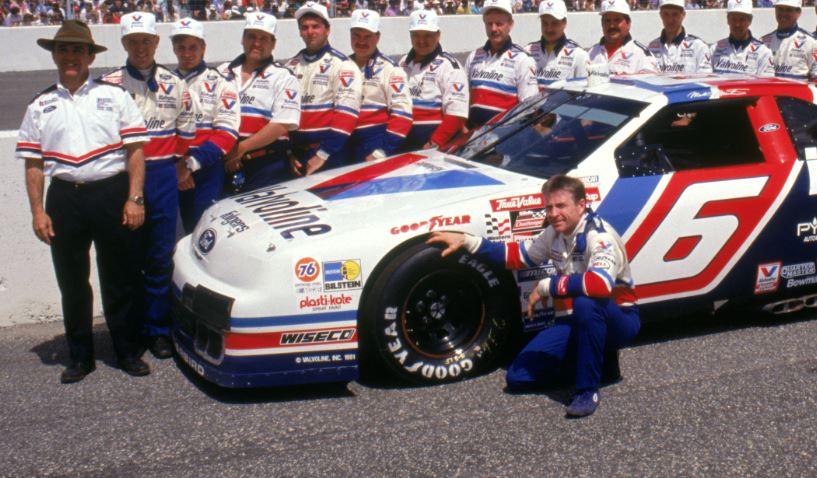 Michigan International Speedway historically has been a strong Ford track, and in the Champion Spark Plug 400, Hall of Famer Mark Martin (2017) won in a Ford owned by fellow Hall of Famer Jack Roush (2019). Martin led 81 of 200 laps, earning $78,645 in the process. Finishing second, 1.28 seconds behind Martin was Morgan Shepherd in the Wood Brothers Racing Ford. That team, NASCAR’s longest continually operating outfit, was founded in 1950 by Hall of Famer Glen Wood (2012). 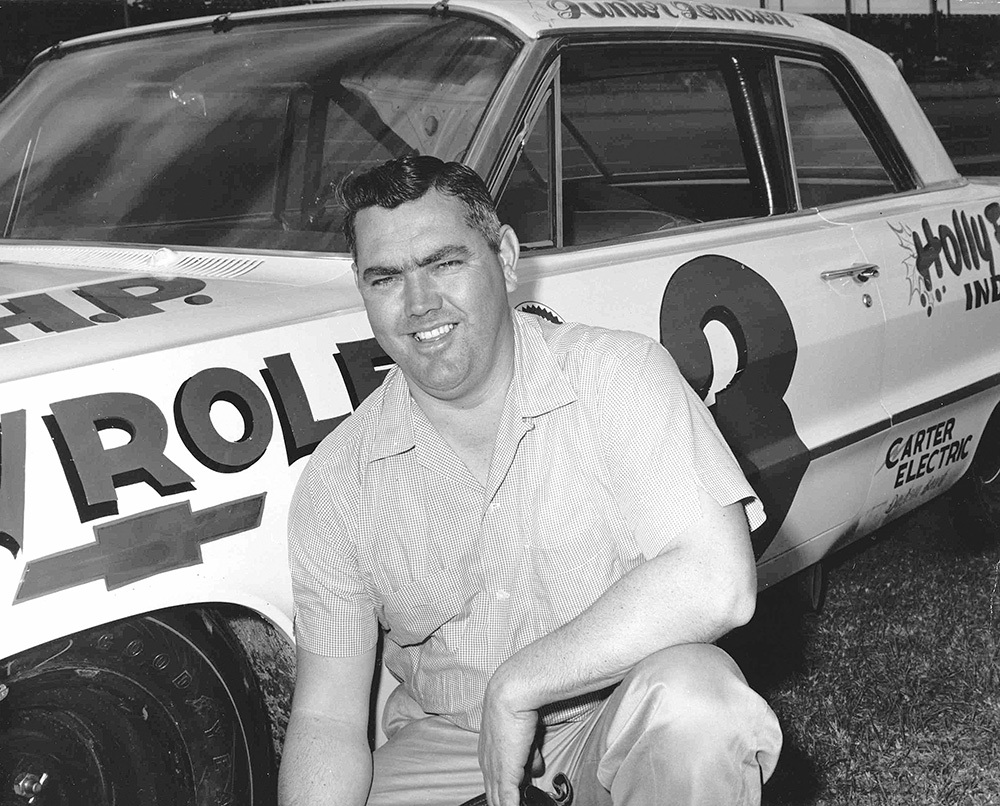 North Carolina native and Hall of Famer Junior Johnson (2010) scored one of the most dominating victories of his career at Bowman Gray Stadium in Winston-Salem, North Carolina. Starting from the pole in a Chevrolet owned by Ray Fox, Johnson led all 200 laps on the 0.250-mile track, lapping the entire field in the process to win $580. Finishing behind Johnson were Hall of Famers Richard Petty (2010), Glen Wood (2012), David Pearson (2011) and Ned Jarrett (2011).